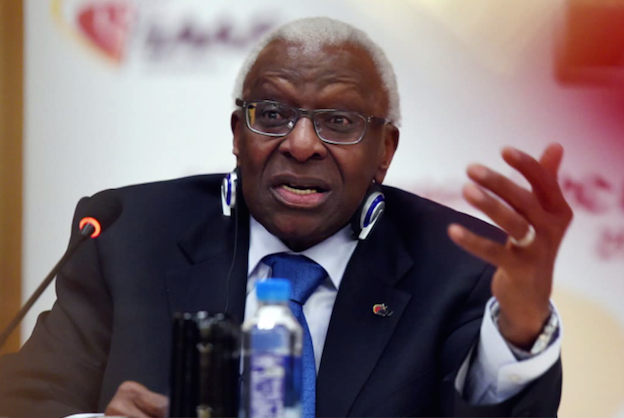 Diack has been charged in France with accepting Russian bribes to cover up positive drugs tests when he was president of the International Association of Athletics Federations (IAAF).

On Friday he was quoted in Le Monde newspaper claiming Russia had donated €1.5 million to help Sall depose Abdoulaye Wade, who was Senegal’s president from 2000 until his defeat to Sall in March 2012.

“President Lamine Diack insists that he never gave any money to the candidate Macky Sall who became Senegal’s president, nor to his election campaign expenses,” said a statement from lawyers Daouda Diop, Christian Charriere-Bournazel and Alexandre Varaut.

“Everything, in his statements to police and to the magistrate, demonstrates this. All contributions from Russia to Senegal had nothing to do with the functions or actions of Mr. Lamine Diack in his position as IAAF president.”

He repeats that he did not seek nor acquire any personal accumulation of wealth.

The lawyers said media reports had been “taken out of their context and hope that the judicial investigation can proceed calmly.”

On Friday, Le Monde published quotes from Diack, 82, in which he said the former president of the Russian Athletics Federation Valentin Balakhnishev, an ex-IAAF treasurer, had made the payments to help Sall’s campaign.

“It was necessary at the time to win the ‘battle of Dakar’ — that is, change those who were in power in my country Senegal,” Diack said, according to taped legal interviews cited by Le Monde. “So, I needed finance… Mr Balaknishev was part of (Russian president Vladimir) Putin’s team and at the time there were these problems with the suspension of Russian athletes, several months before the world championships in Russia.”

However, Varaut denied there was any link between the payments and allegations that Diack accepted bribes to cover up Russian doping.

Diack was arrested by French investigators last month, after which the International Olympic Committee suspended him as an honorary member. Diack, who stood down as IAAF chief in August, has since resigned from his IOC position.

Both the Senegalese government and Balaknishev have denied Russian meddling in Senegalese politics.

“Lamine Diack, and even less so Russia, did not finance the campaign…either directly or indirectly,” presidential communications minister Hamidou Kasse told AFP on Friday. “The campaign of President Macky Sall was financed by Macky Sall himself and through the commitment of activists.”

Balakhnishev told Le Monde that “neither I nor my federation were implicated in any such discussion or affair with Mr Diack”, remarks confirmed by AFP. “This type of business is not in our interest or in our power. We cannot interfere in Senegal’s internal affairs.”