Laurentian University in Sudbury, Ont. has undergone some significant budget cuts, which have affected the school’s sports teams. According to the CBC, the university plans to cut spending by $10 million for the 2019-2020 year. These budget cuts come partially as a result of a provincially-mandated 10 per cent tuition reduction, which means $5.5 million less income for the university.

Battling a muddy course and high winds, the men’s cross country team improved on last year’s results with a 12th-place finish at U Sports. These fellas are going to be deadly next year. This afternoon the basketball teams host our northern rivals Nipissing at 1 and 3 pm

RELATED: Booms and busts of U Sports Cross-Country 2019

Liam Passi is a fifth-year member of the track and cross-country team and an Actuarial Sciences major, native to Sudbury. Passi says the program needs about $25,000 CAD to support its indoor track season. “The school is undergoing major budget cuts and that has affected all of the sports teams,” Passi says. “Laurentian will continue to fund our provincial and national championships but not our elective meets during the indoor season.” The runners must attend pre-season meets in order to qualify for the funded championships.

Passi explains that attending meets is so expensive partially because of the school’s location. “We’re in Sudbury, so we’re always going a long way to race. It’s really expensive (about $5,000 a weekend) to get the team to a competition.”

Historically the track team’s winter schedule has looked like this: one trip to Ottawa and two trips to Toronto ahead of the OUA (provincial) championships. Team members would also organize cars to go to Toronto during the first week of January for the University of Toronto’s Sharon Anderson meet. 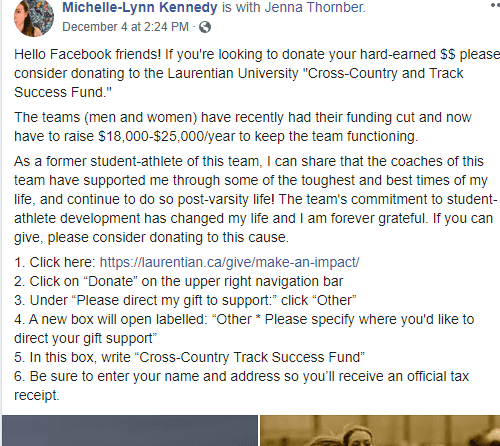 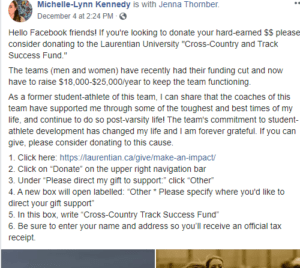 Despite these budget cuts, the team still improved upon their national cross-country ranking this year, finishing 12th at the U Sports Championships. If you’re interested in donating, you can do so on the university’s website. Be sure to direct your donation to the Cross-Country and Track Success Fund.