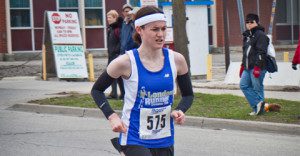 Leslie Sexton of London, Ont. entered Sunday’s Scotiabank Toronto Waterfront Marathon as a relative unknown. With only two marathon finishes to her name and a personal best of 2:39, few would have predicted the extent of her impressive performance.

Unlike others competing for the Canadian Marathon Championships, she did not have any assigned pacers and would not be running for the Olympic standard of 2:29:50. Instead, she ran her own race on her own terms and was justly rewarded with a 6+ minute personal best of 2:33:23 which placed her 8th overall and landed her a second-place silver medal in the Canadian Championships.

We chatted with Leslie following her breakthrough performance in Toronto.

CR: How did you feel going into Sunday’s race? How did training go? 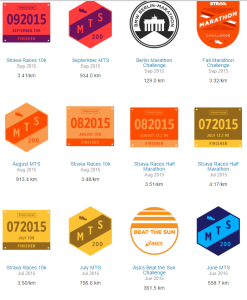 I felt great going into the race. My marathon build went very well which started by running 33:24 for 10K, my second-fastest time ever. I was very pleased at how fit I was early on in the build.

My training throughout August and September went well and I had seven out of ten weeks over 200K*. My mileage was the highest it has been during a marathon build and I was hitting my paces in workouts which has sometimes been a struggle when I’ve run such high mileage. Steve Weiler my coach had me do a lot of work at race pace and long runs at the fast end of easy, so by the end of the buildup I was confident that I could hit my desired pace on race day.

My goal heading into the race was to break 2:35. My biggest workout during the buildup was 26K at race pace which I ran right on 2:35 pace (3:40/K). It felt good and I recovered much faster than I ever have before.

*Known to be a bit of a mileage hog, Sexton routinely tops the Strava MTS leaderboards. While tapering for this year’s race, Sexton joked that her only regret was how the reduced mileage would affect her Strava status.

CR: Tell us how the race went and how it all played out? 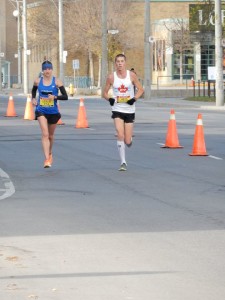 My strategy was just to run as even as possible. Ideally I wanted to hit 1:17:00 for halfway but I was willing to go a bit faster or slower if it meant running with a pack so I aimed for a range of 1:16:30 to 1:17:30, figuring that if I was somewhere in between, I would be ok.

Conditions were awesome on race day. It was cold at the start, but I prefer it a bit cooler when racing. I barely felt any wind on the course either.

Before the race, I had contacted Rob Brouillette who I knew through Strava and we agreed to run together though the halfway mark in around 1:17. Early on we were running a slightly faster pace than I had planned but the effort felt right and we continued to roll along, side by side, exchanging a few words every once in a while. We split 1:16:34 through halfway and I was a bit worried because this was at the faster end of my range. However the body still felt great so I told my brain to just shut up and keep going.

Around 25K I could see that I was gaining on [fellow Canadians] Natasha Lebeaud and Tarah Korir and it took all of my self-restraint not to surge and try to catch them immediately. By 30K I had rolled by both of them. Rob was with me until about 32K at which point he started to fall back so I focused in for the solo grind to the finish. Aside from a little uphill on an overpass at 39K that just about killed me, I think I held on pretty well over the last 10K of the race. I managed to pass a woman from Peru with about 5K to go, which moved me up into 8th overall. My legs felt really rough and I was tired, but I was still hitting my splits and that kept me going. Running the homestretch seemed to take forever, but finally it was over and I was really excited about the time I had just run.

CR: How do you feel about the result? Was it what you wanted? 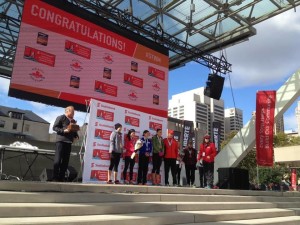 My result was, to be honest, actually faster than I expected to run. I came into this race with a personal best of 2:39:34 and knew I had a lot of room for improvement but I wanted to set a reasonable goal of breaking 2:35 because the marathon has been so tough for me in the past. Before Toronto I had trained for four marathons and only finished two of them, one of which was a massive blowup where I ran much slower than I should have.

To have everything line up in Toronto including the training, the weather and my mental preparation was just an incredible feeling. There were times over the past three years where I wondered if I was wasting my time at the marathon. I thought it could be my best event but after four marathon builds, I only had a 2:39 to my name which was a time that I had hoped to better three years ago in my debut. I guess I was too stubborn to abandon the marathon and after yesterday’s race, I’m really happy that I stuck with it.

CR: What’s next for you both short and long term?

I might do a couple of short runs this week, but obviously I will listen to my body and see how I feel. I will likely get back into regular easy running next week and I plan on running the Halloween Haunting [a local road race in London] on October 31st but just for fun. Last year I dressed up as Wonder Woman and ran the 10K easy so I plan on doing something similar this year, although I haven’t worked out my costume yet. Later this fall I will be racing the Ontario and Canadian Cross Country Championships.

I haven’t decided for sure but I am also leaning towards running a spring marathon next year. However, it won’t necessarily be an Olympic qualifying attempt. Sunday’s race went well for me because I was able to zero in on the right pace for what my fitness was. I do want to run more marathons because I want to keep chipping away at my personal best and getting faster, but my goal pace will be based on what I am fit enough to run rather than what the [Olympic] standard is.

This interview has been edited for clarity and brevity.