The New York Marathon is just around the corner, and the elite field has arrived in the city to prep for the race. Canadian Running had the opportunity to chat with a few of Sunday’s stars to find out what’s going through their heads before they toe the start line. Ever wondered what Ben True or Molly Seidel thinks of poutine? We’ve got all the answers to your burning questions.

First up, we chatted with True, who is a six-time U.S. national champion. Sunday will be his marathon debut, and he’s thinking of changing up his routine a bit — switching from his usual breakfast bagel for some rice and scrambled eggs. “I’ve tried it a few times in practice, and it seems to be working all right,” he says. True has a few more tricks up his sleeve, and instead of a pump-up playlist, he will be listening to the soothing sounds of an NPR podcast to get him in the zone. Unique? Certainly. Effective? We’ll see on Sunday. To the dismay of Canadians everywhere, True is not a big fan of poutine, but what may surprise you is he is a big fan of curling. “I followed curling very closely for quite a while,” he says, “but cheese curds on fries with gravy, I’m not as big of a fan.” 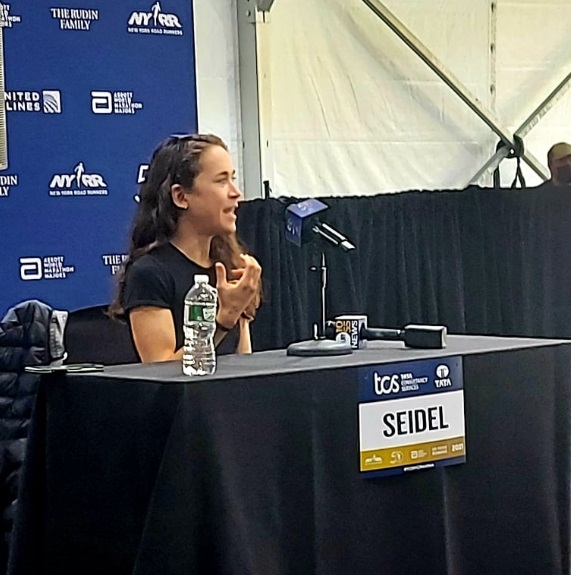 Next up, the Strava queen herself, surprise Olympic bronze medallist Seidel, who’s planning on tackling New York the way she tackles most races — with a full send. “I approach most races the same way I have for my last three — just focusing on the effort that I’m putting out,” she says. “The reason I don’t really make race plans is because you never know what other people are going to do. Peres could take it out in 2:17 pace, and realistically, that’s just too fast for me to try to be going.”

Without a doubt, there is much more focus on Seidel than ever before, but the increased attention doesn’t appear to have impacted her negatively. “I think the way people see me has changed, but the way I see myself hasn’t,” she says. “I know what I need to do, and I’m going to keep doing that. I’m not going to change that just because I have a medal around my neck.”

Seidel doesn’t have a pump-up playlist ready to go yet, but fear not: she said she’d share it with the world once she puts one together. And as for poutine? As a Wisconsin girl, she loves it — and even gave us a recommendation if we’re ever in the state (a spot in Madison called Disco Fries, in case you’re curious what an Olympian chooses as a late-night snack). 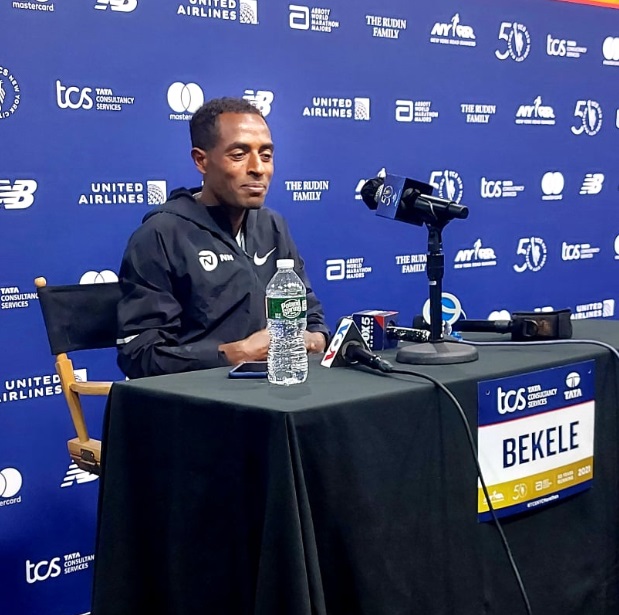 We also spoke with Kenenisa Bekele, who is second only to Eliud Kipchoge as one of the fastest marathoners the world has ever seen. After a disappointing performance in Berlin (which, he says, is because he did not sleep well the night before), he says he is ready and excited to be in New York. His first time racing the New York City Marathon, he will likely be running a more tactical race, running for the win rather than challenging for the course record of 2:05:05, set by Kenya’s Geoffrey Mutai in 2011. “It is difficult to say if I’ll run a course record or not,” he says. “This is my first time on this course and I don’t know how hard it is, and there are no pacers, which also makes it tough.”

Finally, we had the chance to speak with the Olympic champion herself, Peres Jepchirchir, who says the short turnover from Tokyo to New York was not easy, but she’s taken the necessary time to recover and is ready to go for Sunday. When asked what her goals for Sunday are, however, she was much less willing to share. “It depends,” she says. “I’m not saying anything now, I know the course is not easy, but I will be trying my best.”

Unfortunately, Canada’s elite athletes were not in attendance at the press conference, but will no doubt be preparing mentally and physically to toe the line on Sunday. The race kicks off with the wheelchair division at 8 a.m., followed by the elite women at 8:40 and the men at 9:05.