Coffey is a Brooklyn-based filmmaker, writer, actor and activist who’s turned his love of running into a platform for social change. As the founder of Running to Protest, he leads a group of hundreds of runners through the streets of New York City to protest social injustice and advocate for the changes they want to see in the world. As the newest ambassador for Lululemon, he is helping to change what a runner “looks like” and is working with the brand to make running more accessible and inclusive. 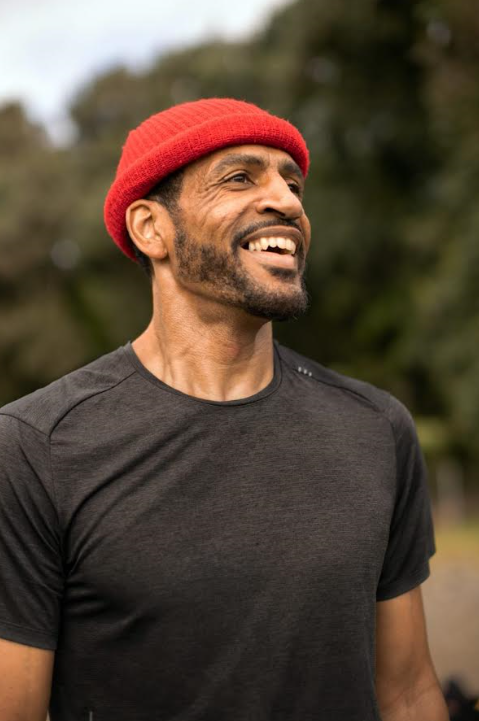 Growing up in a small town in North Carolina, Coffey (who goes only by his last name) discovered his love of running through other sports. His school didn’t have a track team, and his basketball coaches didn’t want him to get injured by running long distances, but he ran sprints and suicides as part of his training. Later, when he moved to New York after college, he felt as though the fast pace of the city was affecting his health. After some convincing from his wife, he finally got onto the treadmill at the gym and fell in love with it.

“Now it doesn’t matter how many miles I ran, because I’m no longer playing basketball,” he explains. “Now I can do whatever my body allows me to.”

When he ran outside for the first time with people, he couldn’t believe how fast the time went by — running seven miles felt like only three or four. He was hooked, and couldn’t force himself back on the treadmill. From there, he began exploring the city on his runs, and today, he’s known as one of the go-to guys if you need directions to get anywhere in the city.

The events of 2020, including the Feb. 23 murder of Ahmaud Arbery, the death of George Floyd in Minneapolis on May 25 under the knee of a white police officer and the Mar. 13 killing of Breonna Taylor by police in Louisville, Ky., affected Coffey deeply. Being a Black man and a runner himself, Arbery’s death, in particular, hit hard.

“I’m from North Carolina, I’m from the country,” he explains. “What he was doing was actually what I had done a couple of times in North Carolina. The only difference was that I had my sister to drive behind me so those things wouldn’t occur.”

The first peaceful protest in New York went by the front steps of Coffey’s house, and he decided to join. He was later chased from the march by an undercover cop. The following day during his solo long run he thought about out how he could lend his voice to the cause in a way that people would listen. He was so lost in thought that he ended up running a marathon without even realizing it. That is how he came up with the idea for Running to Protest.

He joined forces with fellow activist Power Malu, and together they called upon all the run crews in New York to join them on a peaceful running protest through the city. The idea was a success, and now every month they pick a different topic they feel deserves awareness and make that the focus of the run. Since then, they’ve done runs in honour of Taylor and to bring attention to issues like missing and murdered Indigenous women, gun violence and, most recently, anti-Asian racism.

The killing of Arbery brought attention to the racism and lack of diversity in the running world, and Coffey says that today he is seeing an increasing number of run crews building themselves from the ground up with a diverse group of runners. This is the basis of his run crew, DeFine New York, in Brooklyn.

“Actions speak louder than words, and the one thing that’s going to come across for anyone who wants to get out there and make running more diverse is they have to see me out there running,” he explains.

This is his goal as an ambassador for Lululemon: to be a representation for his community to show them that running is a space for them as well. You can learn more about Coffey and his work by heading over to his Instagram page, or by checking out his film, About the People, which examines social injustice and racial inequality in the Black and Brown communities.