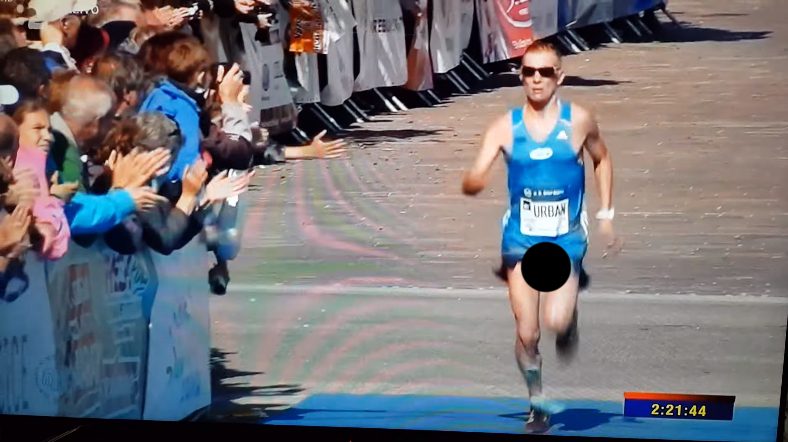 Earlier this week, we stumbled across a most unfortunate split shorts mishap that happened to a Slovakian runner just as he entered the home stretch of the Košice Peace Marathon on Oct. 1. The runner’s shorts failed him, and certain parts of him managed to sneak their way out to get a glimpse of the finish line. The incident was captured on live television and posted online by an observant viewer.

The runner, Jozef Urban, it must be said set an impressive PB running 2:21:51, and didn’t appear to either notice or care that his junk was hanging out as he ran the race of his life.

Some of our beloved readers hated everything about this story; others loved it, and showed their pun mastery. The most… er… ballsy of the lot are below. Didn’t get a comment shout-out? Don’t let us deflate your ego, hang in there folks, we’ll update the list as it grows:

“Maybe this is the trick to running faster? He gives new meaning to running ‘balls out’.

“Guess he was hanging around after the race”

“Balls to the wall!”

“Should be disqualified for using 3 legs

“I would say that is a personal record of sorts.”

“Added to this years London Marathon costumes along with the Mad Pooper.”

“Balls out running, as they say.”

“‘I don’t know how you guys walk around with those things’ – Elaine, Seinfeld”

“The loneliness of the schlong distance runner.”