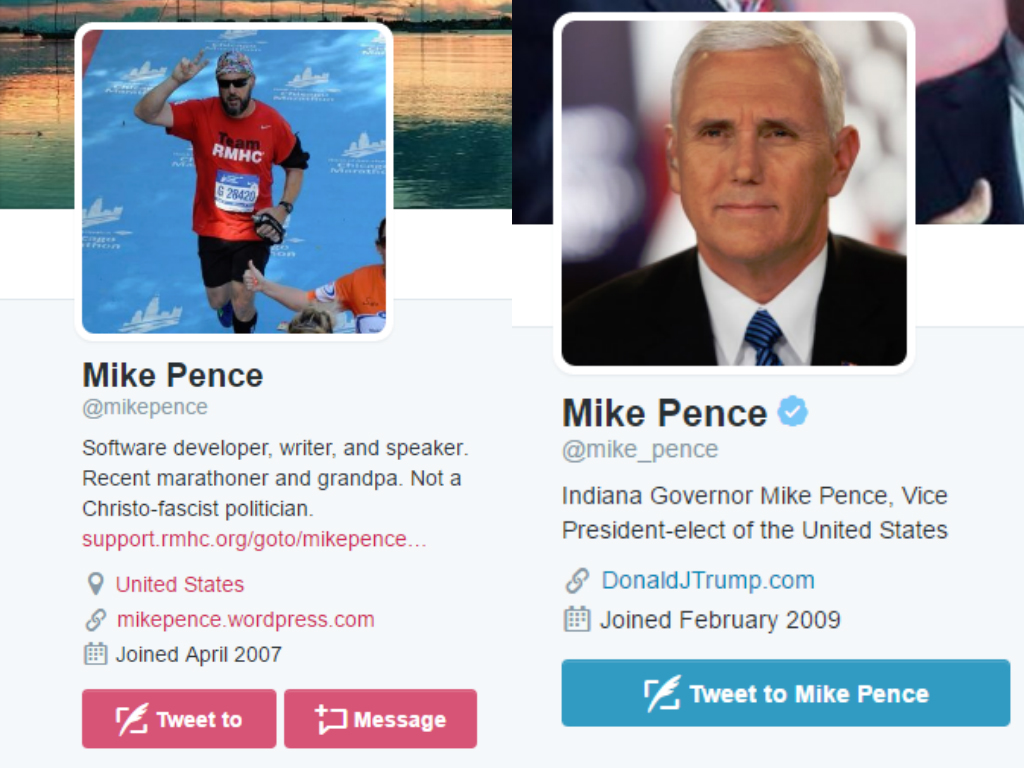 A marathon-running grandfather shares the same name as Vice President-elect of the United States Mike Pence and has received a number of Twitter messages intended for the politician. It appears that Mike Pence the runner has taken the messages in stride and has been posting humorous replies to some of the tweets.

RELATED: Would you vote for Bernie Sanders if you knew he was a former track star?

On Nov. 16, “@MikePence has a better sense of humor than @Mike_Pence” was trending on Twitter as part of its “Moments” feature. The politician’s username on Twitter is Mike_Pence while the marathoner is MikePence, hence the confusion as a single character differentiates the two. The current Governor of Indiana has a second Twitter account, GovPenceIN.

Because usernames are handed out on first-come, first-serve basis, Mike Pence got first dibs on the @MikePence handle back in 2007. Only recently has the attention grown following the results of the American election.

Mike Pence’s twitter is NOT @mikepence. That’s just a sweet little man who didn’t do anything wrong. look at his bio pic.twitter.com/43Q7XVdWxe

Mike Pence the runner is a 49-year-old software engineer, writer, speaker and grandfather. He recently completed the Chicago Marathon. Judging by Pence’s tweet saying “Why should I have to change my name? He’s the one that sucks,” it appears he is not a fan of the Republican.

“I am seeing what had been an inconvenience as a sort of calling,” he told the BBC. “If Twitter has given me this platform, so be it. I will keep speaking out against what I see as harmful in the way of VP-Pence’s policies and decisions as long as I am able.”

Some of Mike Pence’s tweets

Government collection of private internet data, meet our newly elected fascist president. What could go wrong? "Nothing to hide," right?

I will not be acting president. I will be Hand of the King when @realDonaldTrump ascends The Iron Throne. #toldyouitwasworthit

One of Pence’s tweets has gone viral with more than 110,000 likes and 47,000 retweets. The post is a reference to Office Space character Michael Bolton who shares the same name as the famous singer-songwriter.