OFSAA is the Ontario Federation of Schools Athletic Association, and is one of the biggest high school meets in North America. There are three rounds of qualification before admittance to the big meet on the first weekend of June. Qualifying for, and doing well at the meet is a big goal for many high school athletes.

Many of Canada’s best track and road athletes began their careers at OFSAA. This is a series to acknowledge and get to know some of the young Canadian talent that are doing big things in the sport of track and field. We will feature an athlete from each of the six regions of Ontario, and learn about what track, and OFSAA, mean to them.

Austin Ingram is a grade eleven student at Valour Secondary School in Petawawa, Ont. who set the OFSAA visually impaired 100m record last spring in a time of 11.99. Ingram’s vision is primarily affected by light. Because races are well lit, Ingram is able to make out lanes when racing, and doesn’t run with a guide. He is looking to defend his title and challenge his own record this spring. 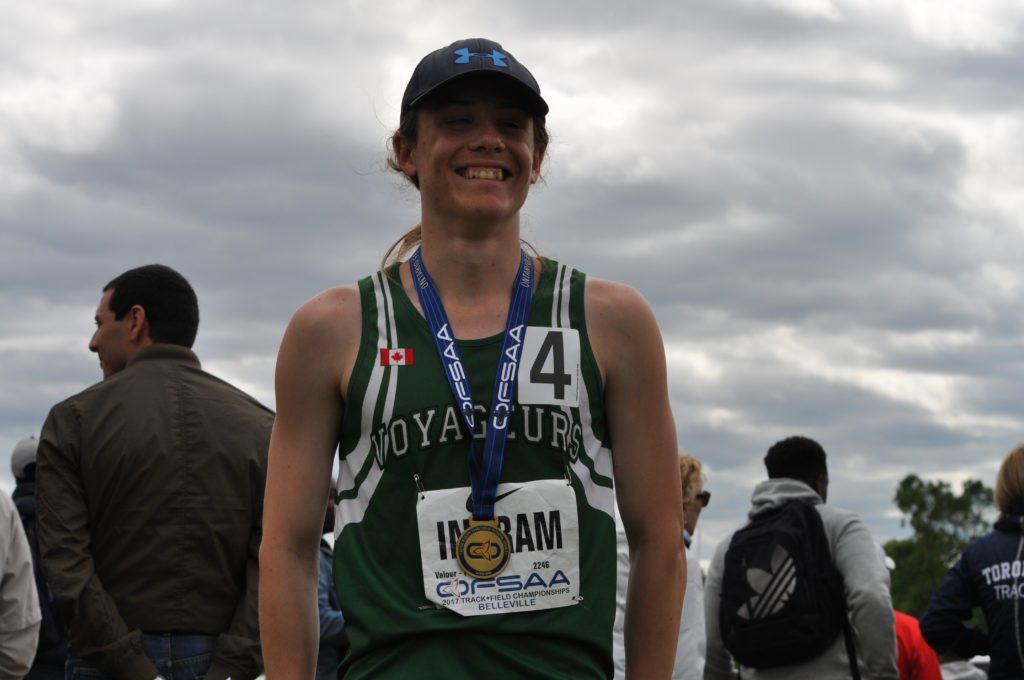 What is your favourite part about the sport of track and field? I like the relationships you form with people. I also love how focused you have to be, especially in sprinting, because if you make one mistake you’re no longer a contender.

What are your goals for this year? Win OFSAA for the 100m once again and hopefully break my own record. After that I’d like to compete at the National Championships in Ottawa.

What is your favourite pre-race song? I don’t listen to music, usually, before I race, but my relay teammates listen to “Don’t Stop Believing” by Journey.

What is your ideal post-race meal? The bus usually stops for fast food, so either Wendy’s or A&W.

Who is the coolest running celebrity? Andre De Grasse is my favourite. He’s a good role model and overcame a lot of stuff to become one of the best in the world.

Who is your favourite running buddy? Hayden Wisenburg; he can get the best out of me in workouts, which makes them challenging and fun.

How did you find the sport of track and field? In grade eight I noticed I was fast. I played soccer and was a really good midfielder. In my first practice, I broke the county records for both the 100m and 200m. And I’ve been running ever since.

What is your fondest track and field memory? My OFSAA gold medal and record last year, because nobody from my school had ever won it. Before the race I promised my coach, Rick Schroder, that I’d get him a gold medal.

What is your favourite piece of running gear? My spikes: Asics Sonic Sprint Elites.

What is your dream running location? I’d love to run in the Berlin stadium. There’s a ton of history there from Jesse Owens at the Berlin Olympics to Usain Bolt breaking the world record.