The United States sent a monkey to space, the Soviet Union sent a couple of dogs and hundreds of humans from all over the world have made it into the cosmos, but Nick Symmonds just became the first person to send a pair of Nike Vaporflys to the final frontier. Why? We don’t know. He might not even know. But he did it anyway.

I mean I did say I was going to take the Vaporflys somewhere they’ve never been before!! So I stepped my game up and sent them into space 🤣

If you want to see video of my shoes going into orbit click below 🚀#Nike #Vaporflyhttps://t.co/VGAsAY86FU

Symmonds has made a lot of videos covering the Vaporfly Next%. In fact, the shoes are the focus of his last five videos. He’s cut them open to see the layers of the shoe (including the carbon plate that’s causing such a commotion in the running world), he’s used them to run a sub-four-minute mile, he’s compared them to spikes and now he’s sent them to space.

OK, he didn’t actually send them to space. That’s a long way up. The shoe did get pretty high, though. To get it airborne, Symmonds screwed the shoe to a platform which was then attached to a weather balloon. He also had 100 cubic feet of helium.

“We’re going to combine the two and take our payload into the stratosphere,” he said, pointing up. 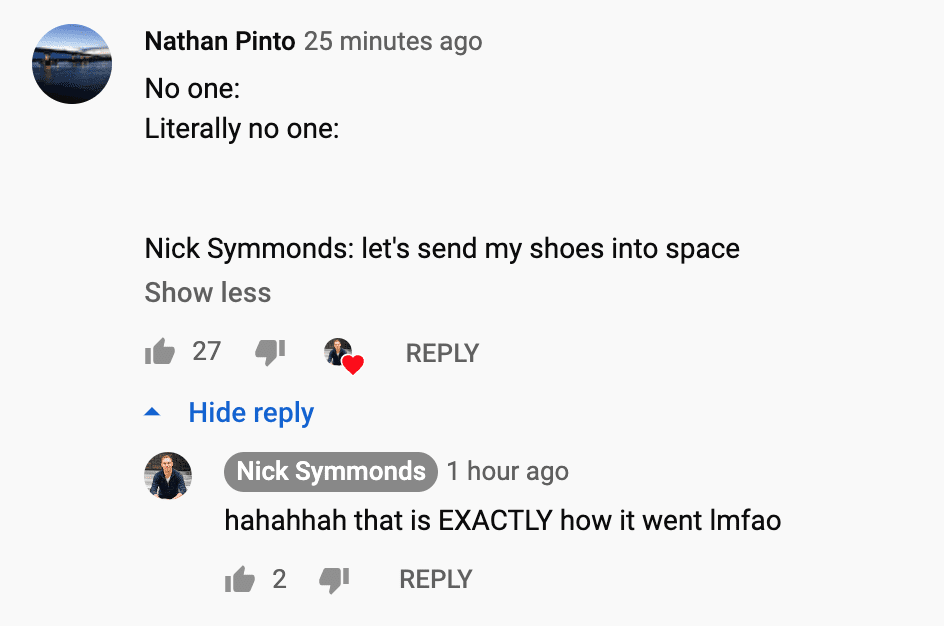 Once the balloon and platform, which was equipped with a GoPro to document the shoe’s groundbreaking trip, were off, he tracked it and followed it until it landed. When he finally found the shoe (he had to hike to get to it), he picked it up and gave it a big sniff.

“Mmm,” he said. “Smells like space.” Then, he unscrewed his shoe—officially the first Next% to go on such a remarkable journey—put it and his other permanently-grounded shoe on and went for a run.


Now, although the shoe didn’t make high enough to be considered “space,” it did reach an altitude of over 75,000 feet, well into the stratosphere. That’s almost double the maximum cruising altitude of some jet airliners.

Symmonds didn’t test anything on the shoe after he recovered it, nor did this have anything to do with Vaporflys, Nike or running in general. But man, was it ever a daring experiment.

RELATED: Why the Nike Next% isn’t for the track

It was a small step for a Vaporfly, but a giant leap for shoe-kind. It was something that few would think needed to be done. But Nick Symmonds is, apparently, not like the rest of us, and he made history because of it.