Reaction on social media was swift after yesterday’s announcement of the Nike Air Zoom Alphafly Next%, Nike’s latest version of the Vaporfly marathon shoe. Revealed just five days after World Athletics tightened up the rules on shoe specs to address mounting concerns about “shoe doping,” it appears almost identical to the one worn by Eliud Kipchoge in the 1:59 exhibition marathon he ran in October–which many assumed would be banned.

Let's see if I've got this right. The Nike Next% had a midsole thickness of 36-37mm. WA announced a new rule at 40mm. Huh? Why higher than Kosgei's world-record shoe? Then Nike announced the new Alphafly Next% at 39.5. Oh, now I get it.

But it appears the Alphafly has been constructed to squeak through (or, as some commentators ventured to assert, the rules were designed to make this shoe legal). With one full-length carbon-fibre plate and a foam stack height of 39.5 mm, they are 3.5 mm higher than the Next% worn by Brigid Kosgei when she broke the world record in Chicago, the day after Kipchoge’s coup in Vienna. And Nike promises to get them to market before the April 30 deadline imposed by WA so the shoe can be worn at the Olympics. (The new rules don’t say anything about air-filled pods, which the shoe also has.)

RELATED: The Nike Air Zoom Alphafly Next % is here, and it’s legal (probably) 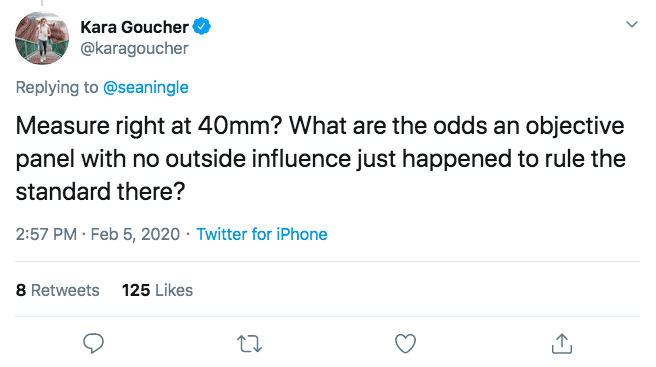 Many commenters reacted with cynicism about World Athletics being in bed with Nike, the brand that dominates athletics. 1968 Boston Marathon champion Amby Burfoot tweeted, “Let’s see if I’ve got this right. The Nike Next% had a midsole thickness of 36-37mm. WA announced a new rule at 40mm. Huh? Why higher than Kosgei’s world-record shoe? Then Nike announced the new Alphafly Next% at 39.5. Oh, now I get it.”

Sure, why not, let's just greenlight doping while we're at it. Who gives a shit anymore. https://t.co/ulMyTjaYnF

Former NOP athlete and Olympian Kara Goucher responded to another tweet, “Measure right at 40mm? What are the odds an objective panel with no outside influence just happened to rule the standard there?” (We know Goucher is not a Nike fan. But she’s far from the only one raising questions about the timing of the shoe’s release and the 40 mm maximum stack height.)

The INEOS 1:59 shoe was rumoured to have a foam platform closer to 50 mm–in the photograph of a grinning Kipchoge holding a shoe in each hand, it looked more than 4 mm taller than the Next%, hence the speculation that surely it would not see the light of day.

Irish distance runner and two-time European champion Fionnuala McCormack (a New Balance athlete) has also been outspoken about what she describes as the weakness of the new rules, which she believes benefit Nike and Nike only. She even refused to wear her own sponsor’s carbon-plated prototype in the Chicago Marathon last year, believing it violated the existing IAAF shoe rules because it wasn’t available to all athletes. (She finished fifth, in 2:26:47, in an unplated racing flat.)

What matters more: your principles or your performance? In the age of the Vaporfly, that's the question now facing Fionnuala McCormack.https://t.co/FBN3XhY8jm

Unreleased prototypes are no longer allowed under the new rules–as of April 30, new shoes must be available commercially for four months before they can be worn in elite competition. Ironically, this protects Nike even further, since its carbon-plated, high-stack Vaporfly model became available in 2017 and the Next% in 2018– while competing brands, most of which now have carbon-plated shoes, have scrambled to catch up (and many are still scrambling to meet the April 30 release date deadline for use at the Olympics).

Whatever people think of the Alphafly (or of WA’s shoe rules), carbon-plated, thick-soled shoes are not going anywhere soon. Not only do they appear to make runners of all levels more efficient (and therefore faster), they may also protect marathoners’ legs from excessive wear and tear and possibly injury–something people will pay good money for. So despite assurances by WA that their research could lead to further rule changes, we’re likely stuck with them, and with the polarizing debates that seem to follow them wherever they go.