Japan Running News recently released their statistical recap of the first half of the 2018 marathon season. According to their findings, North Korean elite marathoners have bested the Canadians. The study is based on averages of elite men’s and women’s results. North Korea holds the eighth-place position in men’s results and 10th place position on the women’s side. Canada doesn’t appear in either top-10 list.

The Pyongyang marathon used to be a common time for Westerners to visit North Korea, but 2018 was a significantly smaller showing of foreigners. The US travel ban and threat of nuclear war significantly cut foreign participation.

While no Canadian performances cracked the top ten, the Ottawa Marathon is ranked in women’s results as the eighth-best marathon in the world. Ottawa is the only North American marathon to make the list. The marathons are assessed based on overall depth and winning time. The Ottawa Marathon also had the fifth fastest women’s winning time for the first half of the 2018 season. 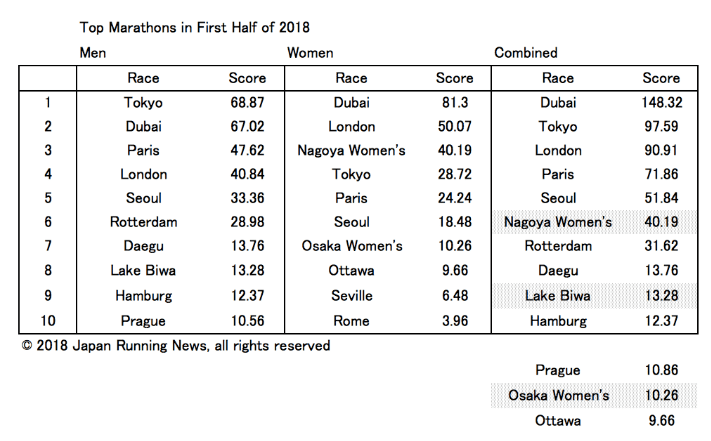 The first half of the elite marathon season runs from January through June and includes three of the World Majors: Tokyo, Boston and London.

The data is slightly skewed this year due to the bad conditions in Boston. The poor weather saw many runners either drop out of the race, or run significantly slower than anticipated. The DNF’s and slow times have left America ranking significantly lower than usual. After the first half of marathon season the U.S.A. sits in fifth in both the men’s and women’s averages, roughly 11 minutes behind the leader, Ethiopia. So far 2018 is Ethiopia’s best year on record.

This data can be used to forecast marathon trends. For example, Kenya is hovering near the elusive sub-2:20 average on the women’s side. No country has ever dipped below 2:20 for a women’s average.