It’s not every day you get to run with the U.S. women’s marathon record holder, so when you do get the chance, you’d better move your butt.

At least, that’s what I felt about 2K into a 5K run, with Deena Kastor chatting merrily to me about motherhood and running. As I huffed and puffed alongside her at a sub-five minute kilometer, all I could think of is “Wow, she’s fast.”

It didn’t take long for Kastor to pass me (unlike the rest of the Canadian Running team, I’m a mediocre runner at best), but at least I can now say I kept up with Deena Kastor, if only for one kilometre.

How did I find myself in a situation where I’d be running alongside Kastor? It was all part of Oakley’s “Perform Beautifully” weekend in Napa, Calif., to showcase the company’s spring 2013 apparel and eyewear collection. About 150 women, including Oakley customers, press and “ambassadors” – women chosen to promote Oakley products across North America – were here to take part in the action, which included a bike ride and winery tour, group fitness class, hike up a mountain and the aforementioned 5K run with Deena Kastor.

The weekend kicked off on Friday evening at the Silverado resort in Napa. Having never been to California before, I spent most of Friday in awe of my surroundings – the mountains, lush vineyards and clear blue sky. That evening, the women were invited to a dinner where Oakley brought out its new 2013 collection of activewear and eyewear. With bright, neon colours and a new technique of laser-cutting fabric, it’s clear that Oakley had one thing in mind – get women noticed.

It would be hard not to get noticed in the bright, juicy colours of their clothing. The company provided everyone with a full wardrobe of workout gear for the weekend, with tops in eye-popping brights like aqua, melon pink, lilac and neon yellow.

Of course, Oakley is known for its sunglasses, and they had a prototype of their new 2013 “Warm-up” model for us to try as well. Made to look more like fashion glasses, these round-rimmed black glasses are designed to be used for both sport and everyday life.

Asics provided shoes for the weekend, letting us try out their new, minimal-style “33,” so named for the 33 bones in the human foot. The shoes aren’t too minimal (they certainly don’t feel like barefoot shoes), but don’t have the same amount of cushioning as the more traditional styles I’m used to. (I freely admit to being an Asics wearer prior to this weekend – the Nimbus model is my go-to shoe for marathon running.)

We got to test out the apparel first-hand during our 5K run. Although the premise was a fun run, it was still set-up like a real race, with bib numbers and medals handed out for all. Some women took off like a shot, others meandered their way through the race course (in a stunning local vineyard, naturally), but everyone seemed to have a lot of fun. And while we weren’t chipped, they did give us Garmin Forerunner 210s to clock our speed and distance. (Although I wish they hadn’t – the 210 is apparently just as mean as the old 110 I have at home. Still kept telling me how slow I was going!) I clocked in at 27:31, not a PB for me by any stretch of the imagination, but I kept slowing down to drink in the beauty of the vineyard. 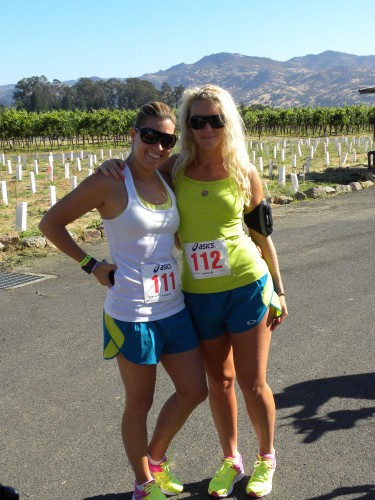 Oakley Canada’s Marie-Eve Guay and Oakley Canada ambassador Marie-Eve Bertrand model some of the gear, including the brand-new “Warm-up” sunglasses for Spring 2013.

In the afternoon, the women were outfitted with Trek bikes, each individually chosen and fitted to us. (We sent them our measurements ahead of time.) The bike I got was one of their newest, the Neko SL, which was an interesting mix of mountain bike and city bike. We then biked to three wineries, where we participated in wine-tasting, followed by a gourmet dinner at the last winery. 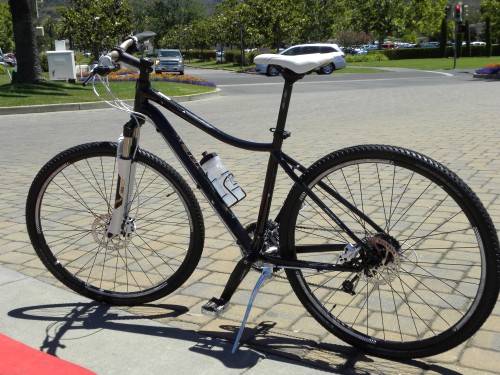 The gear held up well during both activities and on a hot day in Napa. The sunglasses were particularly good, which isn’t surprising considering Oakley’s reputation as a sunglasses manufacturer. The glasses were fashionable, looked good on everyone and, mostly importantly (to me, at least) didn’t move during activity. The cropped pants and tank top were made of a soft, breathable fabric, so I didn’t overheat. And despite the fact I’m not a huge fan of the more minimal style of running shoe, the Asics felt good on the 5K run.

Although I’m clearly not quite Oakley’s target market for the clothing -they’re going for a younger demographic than this thirty-something hockey mom – I still found myself enjoying the gear. The company has clearly put a lot of thought and effort into styling and function, trying to move beyond being simply known for just sunglasses.

Of course, they also know how to put on a great weekend for women. They brought in a number of experts and fitness specialists to talk to us on various topics, including Kastor (who, along with husband Andrew, taught a stretching clinic before the 5K) and triathlete Jenny Fletcher.

Day two kicked off with a workout led by Oakley ambassadors Karena Dawn and Katrina Hodgson. That was followed by a talk at the Culinary Institute of America for a nutrition workshop.

The workshop focused on healthy eating, along with a few great recipes that are simple to make at home, including an antioxidant-rich trail mix (of equal parts goji berries, cacao nibs and raw almonds) and baked kale chips.

Sunday evening ended with a goodbye dinner, and one last look at the new apparel coming next spring.

The main message of the weekend was that for women, it’s time to take control of our own workouts – whether that means finding the time to work out to finding clothes, shoes and sunglasses designed specifically to meet women’s needs.