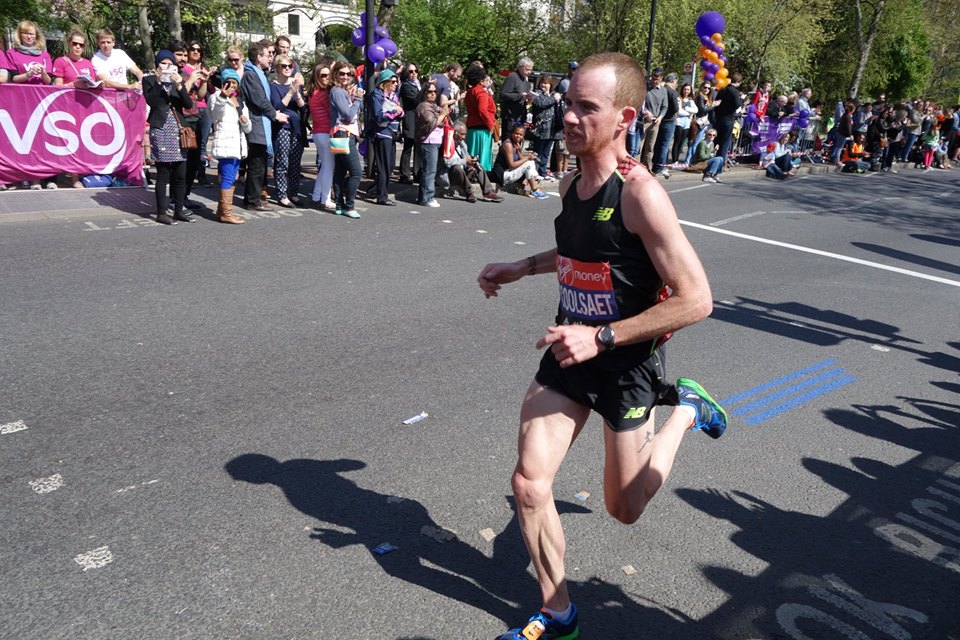 Canadian Running: Talk about your race in London.

Reid Coolsaet: It was a pretty good day and we had a pacer so we were thinking it would be a good day to run fast. Then, just being out there on the course, realized it was going to be a bit tougher. It wasn’t as easy getting to half as we thought, and the pacer definitely thought that — he only went halfway rather than the 30K we were hoping he would do.

Once we started taking turns it got a lot tougher for us. We started falling off pace.

CR: You didn’t quite get the result you were looking for.

RC: I ended up with a 2:13:40 which is three minutes off of what I was hoping to run, about four minutes off my dream race and still a few minutes off what I would consider something I’m happy with.

My buildup hadn’t been perfect going into the race. Shooting for 2:10 might have been a bit agressive but that’s where the pacers were and I wasn’t going to try and run a 2:11 or 2:12 by myself, so I kind of rolled the dice on that dream goal and thought I would take another shot at it. It didn’t pan out but it wasn’t a complete disaster.

I’ll take it as a learning experience. I had a great experience running London and I can totally see myself back there.

CR: Does the race change your plans for the summer at all?

RC: I had contemplated doing Commonwealth Games. Now I would be much less likely to do COmmonwealth than before. Had I hit a time I was happy with it may have been in the books, but now I’m more focused on running a faster time than 2:13 at the end of the year.

So, I’ll probably focus on a fall marathon.

CR: What are your plans farther ahead into the future?

RC: Once 2015 rolls around I’ll be looking to get the Olympic qualifying time. Nobody knows what that is yet. […] I want to give myself every opportunity.

The window will probably open in 2015 at some point and I want to give myself every opportunity to qualify. Even by the end of 2014 I’ll be thinking about prepping for my first 2015 marathon.

CR: Meb at 38-years-old, and is about to turn 39, just won the Boston Marathon. You’ve noted before you don’t feel as sharp as you did when you were younger. What did you think about that?

It’s really cool to see and know that he’s gone through some rough years, from not even qualifying for the 2008 Olympics, having already been a silver medallist [in 2004] and then finishing fourth in 2012, and not even being in contention for a couple of years there.

Sometimes, when I have a race like London where it doesn’t go quite as planned, I can remember it’s really not that bad. It may be a slight blip on the radar, but knowing someone can overcome at lot more than that is always good to look at.

CR: What will it take to have the perfect race that you’re capable of?

RC: It would need a few things to come together. Not everything has to be perfect. Most of it does, like being in a competitive group far into the race and pacing going 25 or 30 kilometres so that we can conserve energy for the hardest stages of the race. Weather is a big factor. If it’s really windy and you’re by yourself it’s easy to lose 30 seconds of a minute. And a good course.

Toronto’s a fast course, Berlin, Chicago, Fukuoka — they’re fast and I think if I’m going to ruin 2:10 or better it would have to be on a fast course.