Canada’s Karla Del Grande was recently named the Female Athlete of the Decade (2010 to 2019) by World Masters Athletics (WMA) in recognition of her multiple national and world records in track and field. Throughout the last decade, the 67-year-old Toronto resident has racked up an astonishing nine world records and won multiple gold medals at world championships in distances from the 60m up to the 400m. We recently caught up with Del Grande to chat about her story, what inspires her and what she’s been up to since the pandemic began.

RELATED: The Shakeout Podcast: Karla Del Grande on fuelling passion for sport at every age

Canadian Running: Were you always a track athlete?

Del Grande: I competed in track as a kid in elementary and high school, and with Burlington Legion Track Club. I had some success in age group competitions and especially with a relay team that placed second in Canada in the early 70s. Continuing on at that time wasn’t really seen as a career choice as it is today for girls. We didn’t even have OFSAA for girls.

I did some gymnastics, volleyball and basketball but not very seriously. Track was my love even then, and it was encouraged and enjoyed by my father for one of my brothers and myself. I had wanted to try triple jump and pole vault but was told I wasn’t allowed because my uterus would fall out. I wish I’d had track as an option to get an athletic/academic scholarship as my brother did, but I went on with a straight academic scholarship to my teaching career. I was happy to coach track and cross-country with students over the years.

CR: How did you get involved in masters track?

DG: When I was in my 40s, I started going to the Running Room group runs and clinics with a colleague, as a way to handle stress from teaching. Once when we were doing interval training on a track, the others complained, but I loved it. Someone asked me why I wasn’t doing track instead, which opened my eyes to the world of masters track. When I found some meets and entered a few races, I was hooked. I was introduced to a coach, Bruce Mitchell, who thought I had potential, and said if I wanted to keep it recreational, that was fine, but if I wanted to compete more seriously, he’d match that level of commitment.

Who inspires you as an athlete?

I am totally inspired and impressed by the older women ahead of me, who had even fewer opportunities than I had but persevered and showed what women could do long into their 60s and above. Olga Kotelko and Diane Palmason are two Canadian women who competed in a range of events. Olga did throws, jumps and running into her 90s. Diane has held Canadian records from the 200m to the marathon over a lifetime of running. 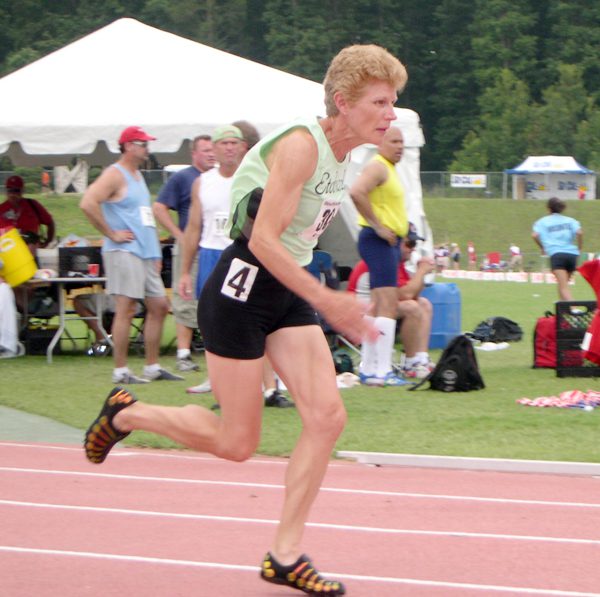 Can you give us a snapshot of what training looks like for a world-record-holding sprinter?

As a sprinter, I generally train three or four times a week on the track, but do other weight workouts, pool when it’s available and bodyweight core training. A workout might include 3 x 200m, 10 x 100m, or 2 sets of 3 x 300m, depending on if we’re working on speed or speed endurance.

How has the pandemic impacted your training?

We’ve done lots of workouts at home, which includes fast running on the spot anchored to a waist harness, or stairs, for cardio, plus bodyweight core exercises like planks, glute raises, or pushups, as well as strength training with kettlebells or dumbbells or TRX. I also do hurdle drills on my bed or over 2 hurdles made with 2 Ikea padded table supports. We’ve had to be creative to carry on.

What are your goals for the upcoming year?

I would love to achieve the goal this summer of running my age, which will be 68, in the 400m. This is something that male runners in the 400m work towards. Last summer, I did 68 seconds at age 67 which is the closest that I believe a woman has done. I’d also like to lower my Canadian record in the 300m hurdles, to get closer to the world record. I’m not far off.

What impact has masters athletics had on your life?

During the time that I was teaching, training helped me deal with stress and gave me something to look forward to at the end of the day. Being active and having fun in any sport gives you more energy. And then as I had success and began traveling to competitions, I made friends around the world who shared my passion. That was so cool. I have some friends that I’ve competed with and shared podiums with since 2003. The traveling adds a whole new dimension, as my husband plans activities for after the meet to help us experience the city or country we’re in. We’ve been to Finland, Spain, Austria, France, Korea, Brazil, Hungary, among other places, and each has been memorable. So we understand the world a whole lot better. 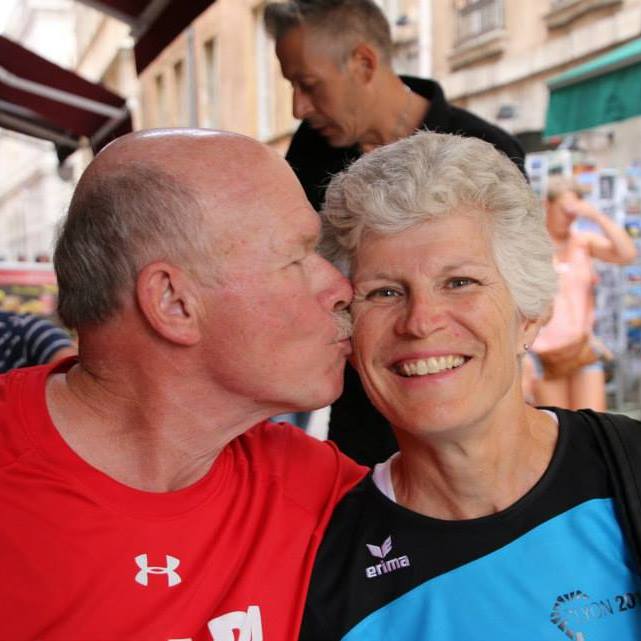 What do you have to say to others who are considering trying masters track?

Masters athletes involved in Ontario Masters Athletics and Canadian Masters Athletics are a very diverse, welcoming group. We all understand the challenges of balancing family, career, and life, aging and health issues. So whether you want to keep fit or compete more seriously against others, you will be welcome. Athletics involves running, jumping, throwing, road racing, cross-country, and race walking, so there is something for everyone. Above all, it’s fun and makes you feel like a kid.

What is your favourite track event?

I do like all my events for different reasons — the pure speed and adrenalin of the 100m, or the power and strength aspect of trying to hold on in a 400m, or maintaining a rhythm in the 300m hurdles. Since the most challenging race is the 400m, I sometimes think I’d rather be doing any other race, except when I’m done and I feel that I gave it my all. There’s lots of satisfaction in that.

How do you like to celebrate after a race?

A good meal with friends, or having ice cream is a great way to celebrate.

I’m not one to listen to music either while training or before a race, so I don’t have a favourite. I find it best to concentrate on my race with full attention to what I have to do.

RELATED: 7 keys to success as a masters athlete