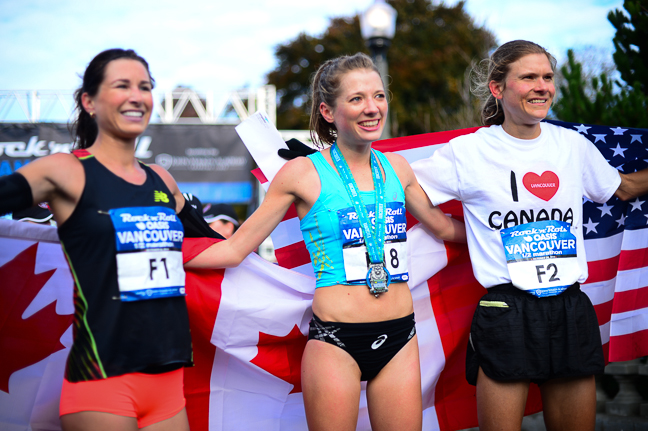 In her first try at the distance, Vancouver’s Rachel Cliff won the inaugural Rock ‘n’ Roll Vancouver half-marathon one week ago. We asked her a few questions about the new distance, the upcoming cross-country championships and her thoughts on the new race.

Canadian Running: How was the new distance?

Rachel Cliff: It was fun and I was pleasantly surprised! Definitely a different type of fatigue than anything I’d experienced before but I wouldn’t say worse. Your legs get really trashed running that distance and sometime around 15K the time on my feet just caught up to me physically and mentally. I have a whole new respect for marathoners now. At the same time, there was never the lactic acid or cardiovascular pain you get in shorter events, so in some senses it was better than I anticipated.

When we first decided I would race the half-marathon, I was actually just naïve and excited about the whole thing – I liked the idea of a new challenge and was confident as longer events seem to come naturally to me. Over the past few years, I’ve been moving up in distance and racing the half seemed like a natural progression and a useful experience for someone focusing on the 5K/10K.

All that said, about two weeks before the big race I got incredibly nervous and started questioning everything. I had no idea what to expect, if I could run a strong half, or how to mentally prep: it was double anything I’d done before!

CR: Do you think we’ll see you racing the half-marathon more often?

RC: I want to do another one and see if I can get my time down, especially as the Rock ‘n’ Roll Vancouver course was hilly and had a lot of turns – gorgeous, but not quick – and because I was so cautious with pacing. However, my focus this spring will be on the track and I want to be careful with how frequently I do the half-marathon as it is so hard on your body. The training was a great complement to the base period so we’ll probably look to try another one fall 2015.

CR: How did you feel Competitor Group did in bringing the series to Vancouver?

RC: Without having much to compare it to I thought they did a great job! The course was stunning and showcased Vancouver, there was music throughout most of the race and a fun atmosphere. It was also a huge event, when I got to the start line I couldn’t believe how many people were out there –literally blocks runners behind us – which really speaks to the event organizers. 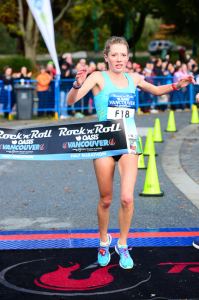 CR: You’ve been successful in cross-country races in the past. Any cross plans this fall?

RC: Absolutely. This is the last year the Canadian cross-country championships will be in Vancouver so I don’t want to miss it. It’s always fun to race at home with family and friends around. It’s been raining lots and the course already looks pretty muddy. So insider scoop: I think it’ll be classic cross-country conditions on Nov. 29.

CR: You’ve been named to the Chiba Ekiden team at the end of November. What do you have ahead of you to prepare for that?

RC: This week is a bit of a down week to make sure I’m recovered and don’t get injured. I’m still running, but not doing hard workouts till the weekend. I’ve done a lot of base work in preparation for the half-marathon. I’m fit, but maybe not sharp. The focus over the next three to four weeks with Chiba and then nationals coming up will be to add intensity and replace the long tempo with VO2 max type work.