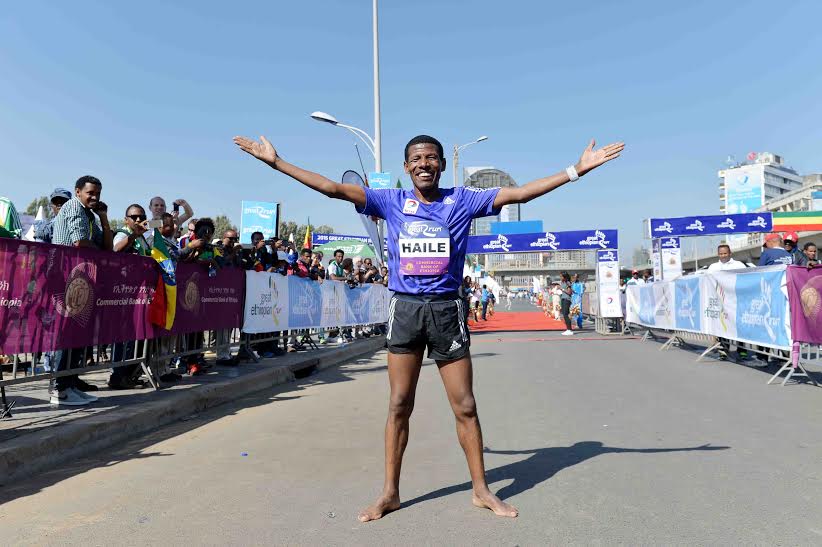 In the last kilometre of his last-ever race, Haile Gebrselassie stops, removes his shoes, and hands them off to a runner. He means them to be a souvenir– it’s a priceless one for anyone who has followed the running icon’s accomplishments down through the years. Gebrselassie then turns and starts on the last kilometre of the Great Ethiopian Run. The distance star will end his running career just how he started it: barefoot. He cruises along for that last kilometre as the blue finish line comes into view. When he crosses it, he flashes his trademark smile. As he poses for the cameras, the shoes are returned. This goes to show the respect his countrymen have for him.

“I will autograph the shoes and find the person who returned them then give them to him,” Gebrselassie says. That single runner is one of many. More than 40,000 runners took part in the 15th annual Great Ethiopian Run in Addis Ababa on Nov. 22. Most of them dressed in green t-shirts adorned with the image of the great Gebrselassie.

The 10K race is the biggest in Africa and after over two decades, Gebrselassie will end his career here. He won his first two world titles in 1992. Just over 23 years later, he runs barefoot with plenty of world records and the first-ever sub-2:04 marathon under his belt.

“This year is a very special year and it’s not because I ran,” Gebrselassie says. “For the last two years, we were not in Meskel Square because of construction.” He adds that three years ago, a committed bunch of runners walked to the race. Now, they can take the light-rail train.“It’s amazing, I am so happy. Plus, I’m thankful to the government for allowing us to return to this square. They stopped hosting events in this square only making an exception for the Great Ethiopian Run,” says Gebrselassie.

Ending his racing career, Gebrselassie and others look towards the top runners of today. On the course, the fastest is 24-year-old Tamarit Tola. Tola became the champion of the Great Ethiopian Run, crossing the line first with his time of 28:42. It was reflective of the hilly course, the warm temperatures and an altitude of roughly 8,000 feet.

Tola is the 2014 Ethiopian national cross country champion and holds a personal best 10,000m of 27:19.34 in Hengelo this past summer. His club mate, Mamitu Daska, a past winner of the Dubai, Houston and Frankfurt marathons, claims the women’s title, with a time of 32:17. The 32-year-old’s margin of victory was almost a minute. Both winners are represented by Italian agent Gianni Demadonna, who works with the elite athletes for the Scotiabank Toronto Waterfront Marathon.

Both winning athletes are awarded 50,000 Birr ($3,172 ). At the end of the race, a festive atmosphere takes over, both to celebrate the athletes’ wins and to say farewell to the star of the show: Haile Gebrselassie. The race venue turns into a carnival-like goodbye party.

It’s one of many events that illustrated the electric vibe at the Ethiopian racing scene. For example, in the days leading up to the race, Gebrselassie was everywhere, attending dinners, posing for endless lines of well wishers and, most significantly, successfully negotiating to return to the historic Meskel Square. Vendors even sold masks with his face on them.

Also telling of the race’s vibe was the excitement around the VIP section– filled with great Ethiopian runners past and present. Among them was three-time Olympic champion Tirunesh Dibaba and her younger sister Genzebe, the 2015 world 1,500m champion and world record holder. At one point, they leave the stage because of the crowd of runners gathering to take their pictures before setting out on to start the course.

To signify that start, Gebrselassie fire the pistol, then runs alongside several government ministers for his final race. He runs with them only at the beginning. “ I had to move and run fast,” he says. To run 30 minutes, he would have started with the elites. When he stops to undo his shoes and pass them off to the runner, he’s not far from the finish. He crosses it for the last time– 33 minutes.

The race was carried live by Ethiopian television. Highlights are to be shown during the opening of the 2015 United Nations Climate Change Conference in Paris.