EDITOR’S UPDATE: Callaway turned himself in to police on December 13 and was arrested on a misdemeanour charge of sexual battery, which carries a maximum penalty of 12 months in jail and a USD $5,000 fine. Bozarjian is represented by the prominent feminist attorney Gloria Allred of the Los Angeles firm of Allred, Maroko and Goldberg, who also represented 33 women in the Bill Cosby case.

Reporter Alexandrea Bozarjian of WSAV News in Savannah, Georgia filed a sexual battery report with the Savannah Police Department today about the incident at Saturday’s Savannah Bridge Run. Thomas Callaway, 43, of Statesboro, Georgia is alleged to have slapped and groped her on the buttocks while she was reporting live from the race on the city’s Talmadge Bridge. Callaway was initially identified by Twitter posters, who slowed down the video clip and found photos of the same individual wearing bib #7553. 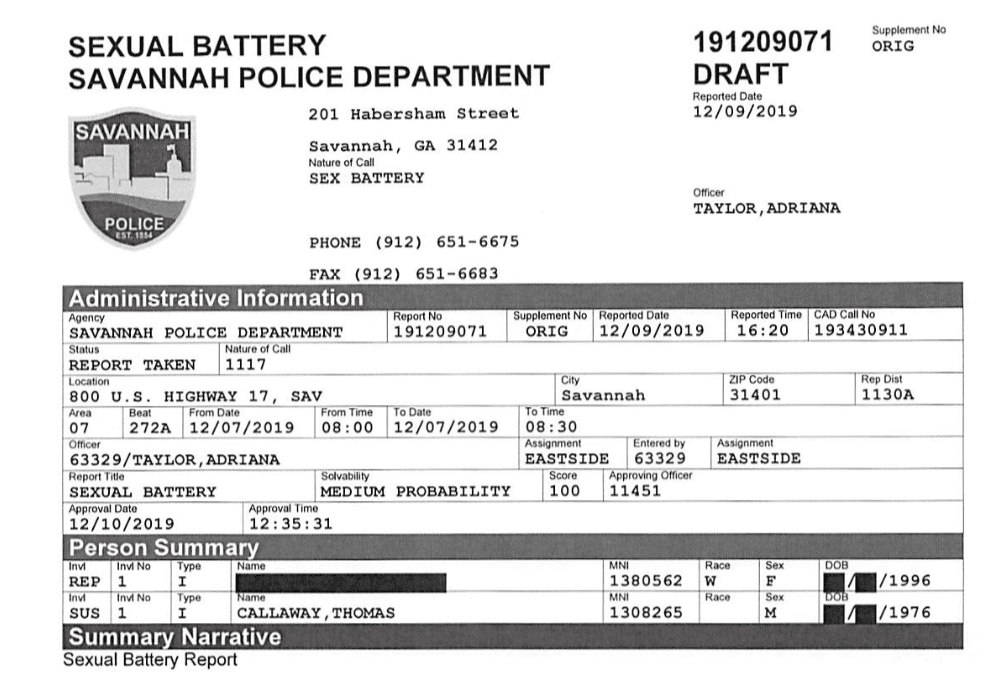 Bozarjian, 23, reacted with shock after the slap, regaining her composure after a couple of seconds and resuming her report. She later tweeted about the incident: “To the man who smacked my butt on live TV this morning: You violated, objectified and embarrassed me. No woman should EVER have to put up with this at work or anywhere! Do better.”

Savannah police initially told media they were ready to help Bozarjian if she wanted to proceed, and today they informed Canadian Running that she had filed a report. The report says Callaway called Bozarjian’s place of work Saturday evening and left a message apologizing for the incident. He called again Sunday with the message that he planned to apologize to her in person.

Check out this jerk smacking a @WSAV reporter's ass live on air. And sorry, that's my kiddo making horribly timed weird noises in the background. pic.twitter.com/6tzi6P1Jbo

The report is redacted so that Bozarjian’s name does not appear. Callaway is identified by name.

The report reads: “(redacted) stated she was conducting a live broadcast with WSAV, covering the River Bridge Run, when an unknown male who was running in the race approached from behind her and smacked her on the buttocks. (Redacted) described the smack as a “smack and grab,” advising that he also grabbed her buttocks in the same motion. She stated she felt a sharp sting after the smack and advised that it caused her to pause during her broadcast. She advised that the male continued running in the race after the incident. (Redacted) described that male as a middle aged tall white male who was wearing sunglasses. She stated the male later identified himself as Mr. “Tommy” Callaway after calling her place of business, WSAV, later in the evening on 12/7/19. She stated Mr. Callaway also contacted the business the next day stating that he was going to drive from Statesboro to Savannah to apologize to her in person.

Coming up on @CBSThisMorning, @wsavalexb the reporter who groped on live television by man running in race she was covering will speak to @GayleKing, @AnthonyMasonCBS & @tonydokoupil…tune in to hear her story. pic.twitter.com/FFtmO2Wbpg

Bozarjian appeared on today’s edition of CBS This Morning to talk about the incident, which has resulted in his being banned from future races sponsored by the Savannah Sports Council, however his race results are still viewable on the race site. “He hit me hard,” Bozarjian says, adding that he tried to contact her to say he didn’t intend to hurt her. “Not gonna really debate that, because he hurt me.”

"It's not okay to help yourself to a woman's body just because you feel like it… in order to make any kind of change, you have to be a little bit drastic. And you have to… chip away at this toxic culture that permeates our society." — @WSAVAlexB pic.twitter.com/tYsvu0uFiW

One of the CBS hosts reads a letter from Callaway’s lawyer, Joseph Turner, saying Callaway regrets the slap, that he is a loving husband and father who did not act with criminal intent and that they “do not expect any criminal charges.”

UPDATE: Callaway appeared on WSAV on Tuesday to make a public apology to Bozarjian.