At the British Masters 10K Championships on Sunday in Grangemouth, Scotland, local runner Alastair Walker not only broke the British men’s 65+ 10K record, but took more than one minute off the world record as he placed 32nd overall in a speedy time of 34:32.

Best run of the weekend on the roads?
At the British Masters 10km at Grangemouth, Alastair Walker obliterates the world M65 record with a stunning 34:32 – taking a minute off the previous best pic.twitter.com/xFpiUFQEun

In 2018, Walker returned to running after taking a 22-year hiatus from the sport. Upon his return, he won gold in the men’s 60+ 10K at the World Masters Championship in Malaga, Spain. He followed it up with a bronze-medal performance in the 5,000m for the 60-65 age group. 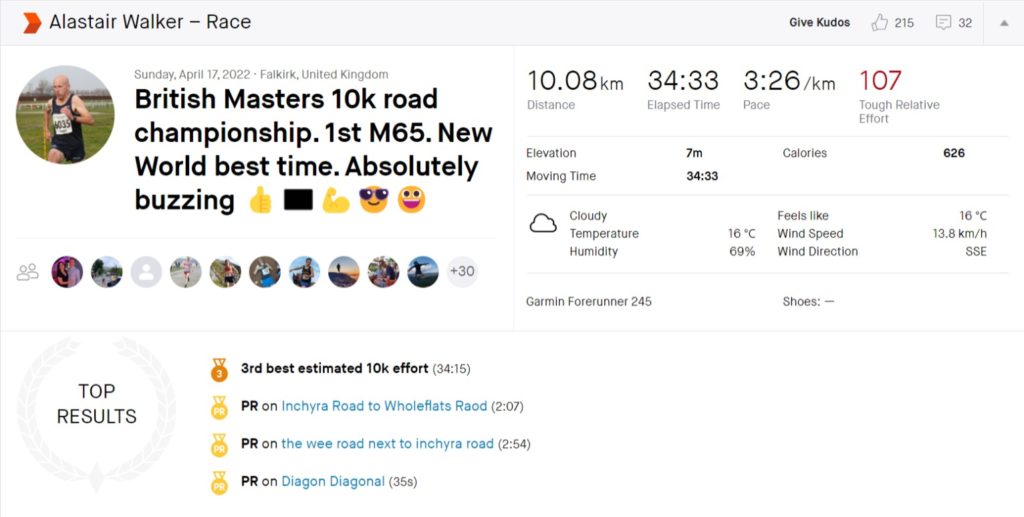 In an interview with the Old Crazy Runners podcast, Walker said his key to staying fast is having fun with the sport, and obviously the post-run beverages.

Walker has his sights set on the 5,000 and 10K at the 2022 World Master Athletics Championships in Tampere, Finland. If he continues running at the level he’s at for the next five years, he could potentially break Ed Whitlock’s 70+ 10K world record of 37:33.