Though neither Caster Semenya nor her new coach, Samuel Sepeng, has issued an official response to last week’s announcement by the IAAF on the subject of females and testosterone, Semenya has expressed her feelings in a series of tweets, one of which poignantly sums up her response: “I’m 97 per cent sure you don’t like me, but I’m 100 per cent sure I don’t care.”

The new rule states that women racing distances between 400m and the mile must adhere to a new upper limit for testosterone of five nanomoles per litre, which in Semenya’s case would mean having to take medication to bring her hormone levels down, compete against men, or move up to distances longer than the mile. The rule takes effect in November. (Females produce testosterone naturally, but the upper limit for what is considered normal is 2.7 nmol/L; the normal level for males is generally above 10.5 nmol/L.) 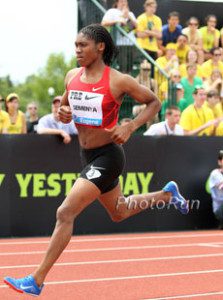 This is not particularly new for Semenya, whose success on the track has fuelled a veritable industry of debate over its legitimacy. After her 2009 win at the world championships, she was temporarily suspended from competition and forced to undergo gender testing, and her career has been clouded by controversy ever since. Yet Semenya has never lashed out publicly.

Hyperandrogenism in females (more appropriately referred to as differences of sexual development, or DSD) includes conditions where females produce unusually high levels of the male sex hormone testosterone, which may unfairly enhance performance in athletic competition because it contributes to greater muscle mass and higher haemoglobin (and therefore red blood cell) counts.

Semenya won gold medals in both the 800m and 1,500m distances at the recent Commonwealth Games on Australia’s Gold Coast, and set a new national record in the 1,500m, of 4:00.71. She also won gold at the 2016 Olympics in the 800m‚ as well as gold in the 800m and bronze in the 1500m at last year’s world championships in London. Her critics contend that she enjoys an unfair advantage due to her DSD.

The IAAF’s handling of a similar case in 2015 involving Indian sprinter Dutee Chand led to the Court of Arbitration for Sport banning gender testing for two years, which meant that Semenya no longer had to take testosterone-lowering medication. The CAS also suggested the IAAF commission new studies on the subject, which it did; the results of these studies were published in the British Journal of Sports Medicine last year and form the basis for the new guidelines, which the IAAF claims are bulletproof.

Semenya’s supporters point out that the studies included the hammer throw and pole vault as sports in which elevated testosterone is likely to produce a competitive advantage, but the IAAF chose to focus only on the track events. The fact that the ruling does not extend to throwers or jumpers or to sprint distances under 400m, has enraged South Africa’s minister of sport, Tokozile Xasa, who claims that the new rules are clearly meant to target Semenya and are racist, sexist, and homophobic, and Xasa vows to fight it. And she disputes the IAAF’s position that the rule is designed to create a “level playing field” and is based on reliable science.

Athletics officials have made multiple attempts over the last decade to stop Caster Semenya from running. This has been her response pic.twitter.com/nS79Z3GUpf

In today’s Guardian, columnist Andy Bull predicts an endless loop of challenges between the IAAF and the CAS, because of the IAAF’s obsession with testosterone as the only reliable source of distinction between males and females (which has been disputed).

The only thing that’s certain is that Caster Semenya, who is still only 27, will continue to be the subject of speculation and dispute for some time to come.