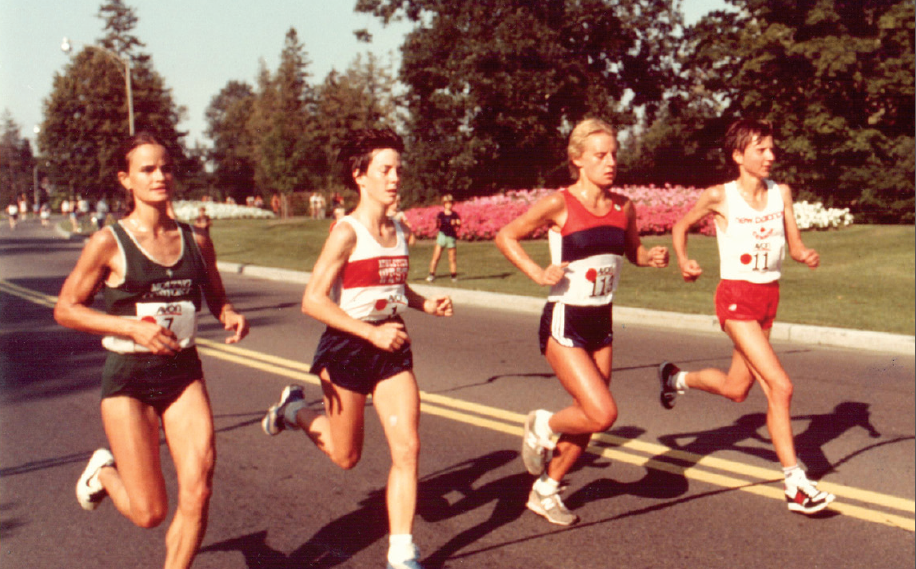 Below us on the cinder path were 11 wretched women, five of whom dropped out before the finish, while five collapsed after reaching the tape,” screamed the New York Evening Post on Aug. 2, 1928. That was an eye-witness account by cable from Amsterdam, reporting the first 800m race for women to be included in the Olympic Games.

The London Times tut-tutted about the “half-dozen prostrate and obviously distressed forms lying about on the grass,” and piously raised the question of whether the sight “may not warrant a complete condemnation of the girl athletic championships.” Those and other reports are distinguished by the sense of righteous outrage that women should suffer such improper physical distress in public.

They are even more distinguished in that every “fact” they claim to report is utterly wrong.

Fact: There were nine women in the race, not 11. All finished. None “sobbed.” None “collapsed.” None lay “distressed on the grass.” One, Canada’s Jean (Jenny) Thomson in fourth place, crashed eagerly forward as she fell past fellow Canadian Fanny (“Bobbie”) Rosenfeld at the line. She was helped back to her feet (I’ve timed it from the footage) in 3.4 seconds.

Fact: There had been three heats, run in hot conditions the previous day, which went totally unreported, though a field of 27 athletes from 14 countries and four continents might have seemed newsworthy, showing the high interest in middle-distance running by women. No runner in the heats collapsed, we can be sure, or those races would have become lurid headlines. All were given official finish places. Fact: That one ardent finish line tumble by a 17-year-old Canadian was transformed into an orchestrated fiction of mass collapse and unseemly distress. The official IOC (International Olympic Committee) film in the Lausanne Olympic archive cuts in only as Thomson staggers nose-down forward, and falls. It has been edited to avoid showing the first three, who finished strongly (to judge from still photographs) and who all broke the world record. If you study the few seconds of official film closely, those three (German, Japanese and Swedish) are identifiable, securely on their feet, around the finish area.

Two Canadians were thus, wholly innocently, even fictitiously, key players in a race that changed the history of women’s running. It was 1960 before the women’s 800m was restored to the Olympic program. It was 1968 before another Canadian barrier-breaker, Abby Hoffman, featured in the final (seventh in 1968 and eighth in 1972).

Thomson and Rosenfeld earn the name of barrier breakers, even though Canada had a full range of championship events for women up to 880 yards/800 metres. Thomson won that title in 1928, as well as 1929 championships in shot put, discus and long jump, and many sprint wins. She would have been a remarkable heptathlete. So would have Rosenfeld, an even more extraordinary all-round talent. At those 1928 Olympics, she also won the 100m silver medal, and helped Canada win gold in the 4×100. An outstanding hockey player, Rosenfeld became a national-level coach, administrator and journalist, covering women’s sports from 1936, especially in a Globe and Mail column titled Feminine Sports Reel from 1937–58. A footnote to the 1928 Olympics: there were no British women. The IOC had reluctantly agreed to include 10 women’s events, but at almost the last minute, they cut that to five (100m, 800m, 4x100m, high jump, discus). Great Britain withdrew its women’s team in protest.

The misreporting did its job. Until after the Second World War, the longest Olympic event for women was 100m. Canada and other countries provided middle distance track races, sometimes up to 1,500m or the mile, and some high schools permitted girls’ cross-country, with the longest distance usually capped at 4k. With such limited opportunities, it took time for women to fulfill, or even recognize, their potential as runners.

“As a teenager in the 1950s, I was not allowed to compete in the middle and long distance for which I knew I was best suited. So I retired from running at the age of 17,” wrote Diane Palmason in Playing It Forward: Fifty Years of Women and Sport in Canada. Her career began again when she ran a marathon 27 years later.

“I always loved to run. I was a competitive swimmer first in high school, and then found my swimming fitness transferred to the 880 on the track. But there were almost no road races, only track and cross-country, and nothing after college,” reflected Toronto pioneer Jo Ann Heale in a recent email correspondence.

Cross-country gets forgotten as part of the story of running, but it was central before road running suddenly boomed. In 1969, Canada sent a team to what was then the International Cross-Country Championship. Contested between the United Kingdom countries plus France and Belgium, the event began to grow in the 1960s, and in Glasgow in 1969, some enthusiasts added a semi-official women’s race. It would prove momentous.

Canada was in at the beginning, though credit goes to the runners more than the national federation. “The runners had to pay their own way to Glasgow, and also cover the travel costs of coaches and officials,” said Thelma Wright, who at age 17 placed 28th in that historic first race, despite injury.

“I pulled a hamstring racing indoors, and it went again in the cross-country as soon as I picked up the pace. I knew I was better than that,” Wright recalled from Vancouver.

Seven places ahead was Hoffman, another outstanding Canadian who might have done even better at longer distances.

The next year in Frederick, Maryland, Wright took the bronze medal. Britain’s Athletics Weekly praised the repeat winner Doris Heritage Brown (U.S.A.) for setting new standards for women by her high training mileage, and the U.S. Women’s Track and Field News ran a cover photo of the medal winners – printed in pink.

Wright went on to win two Commonwealth Games bronze medals at 1,500m (1970 and 1974), was an Olympian in 1972 and 1976, and led the Canadian cross-country team again in 1977, after supposedly retiring. Clearly, her greater talent lay in those unavailable longer distances. “My calling was cross-country. But in Canada in those days we had to race indoor track in the winter, even in Vancouver,” she said. We’ll never know what Wright, Palmason and many other women, might have achieved. In a video interview in 1980, Wright said, “I’d like to see the 5,000 and maybe the half-marathon for women. I always said, ‘I wish the race were longer.’” Before recording that interview, though now calling herself only a recreational runner, Wright dominated a 10k road race. That new branch of running boomed, independent of the old restrictions.

The restrictions came from officials, female as well as male, supported by prejudice in the newspapers and the medical profession – not from male runners. Running in England and then New Zealand in those years, I never heard anything but welcoming praise for the few female runners who appeared. Sometimes a man adopted women’s running as his mission. In May 1967, Sy Mah, a Toronto runner and coach, put on a marathon, partly to provide opportunity for his 13-year-old protegée Maureen Wilton. To make it a genuine race, Mah invited American Kathrine Switzer, newly notorious for officially entering that year’s Boston Marathon, where she got physically attacked by an official, and was then banned by the Amateur Athletic Union.

“We accepted invitations to race in Canada, making lots of friends and feeling like aau draft dodgers,” Switzer wrote in Marathon Woman.

Wilton, paced by Mah, ran a world’s best time that day of 3:15:22. Two years later she was on the inaugural Canadian cross-country team in Glasgow, again underlining its importance in the story.

Wilton was a brief ly brilliant teen talent, not an activist barrier breaker. That role was vigorously taken up by Hoffman (who at age nine had adopted a boy’s name to gain access to play hockey), and by a handful of pioneer Canadian women who claimed the right to run, even as far as the marathon. One of them, Louise Wood, told her
story first-hand in this magazine (“Into the Boys’ Club,” Canadian Running, Sept.–Oct. 2011).

Now things began to happen fast. Switzer was hired by Avon Cosmetics to promote women’s sport, and swung that corporate power and big budget to the cause, creating the Avon Running Global Women’s Circuit. Pressure was building for longer Olympic track races, but Switzer and others leap-frogged to the unthinkable, campaigning for a women’s marathon in the Olympic Games.

Canada played a significant role. After running the National Capital Marathon in Ottawa in 1976, Palmason began a Canadian campaign for a women’s Olympic marathon, she wrote in Playing It Forward. Ottawa hosted the Avon International Marathon in 1981, staging a spectacular street parade the day before. Perched regally in the white limo with Switzer were two new stars of Canadian women’s running – Jacqueline Gareau and Linda Staudt.

Gareau and Staudt burst on the world scene in 1980, at venues that typified the old and the new in marathon running – Boston and the Avon International Marathon.

One of seven children, Gareau came from a farm at Frenchspeaking L’Annonciation, Quebec. She began running for health reasons, and completed her first marathon in 1977, at 24, surprising herself by finishing second to Thomas. By 1979, she was good enough to place third in the New York City Marathon, in 2:39:04, behind Grete Waitz’s 2:27:33 – the first woman under 2:30. Things were indeed happening fast. The next April, Gareau was at Boston, with Americans Patti Lyons Catalano and Ellison Goodall the likely opposition.

Canada’s winning tradition at Boston stretches back to Jack Caffery in 1900, and includes Tom Longboat, Johnny Miles, Gerard Coté and Jerome Drayton. Gareau was the first Canadian woman with a chance. She started back in the pack, but by 20k had passed both Americans. The crowds acclaimed her, “First woman! First woman!” The Wellesley girls went crazy. She reached the finish still running strongly, in 2:34:28, a personal best and course record.

“But people were not really acting like I was the first. I was a bit surprised when I arrived and I was not received,” she told David Blaikie for Boston, The Canadian Story. Already on the podium, arms victoriously raised, stood a woman in a crisp yellow T-shirt, unstained by sweat, revelling in the most despicable act of cheating in the history of the marathon. Rosie Ruiz had ducked into the race on Commonwealth Avenue and had run barely one kilometre. As a final twist of irony for Gareau, it was the great Coté, the four-time Boston winner, who had to place the laurel wreath on the cheater’s head, instead of presenting it to the fellow French Canadian who had earned it.

Linda Staudt, by contrast, got her due immediately, as it should always be. She was a product of the multi-tiered Avon circuit, whereby local winners had expenses paid to national and then international events. And thus Staudt, from Windsor, Ont., found herself in London, England, in August 1980 to run the Avon International Women’s Marathon.

The unknown Canadian finished third in 2:37:39, ahead of (among others) American Joan Benoit, who would win the gold medal in Los Angeles four years later. The Avon race was politically crucial, since its global representation
and high-quality performances helped persuade the IOC to vote for the women’s marathon. No one collapsed, though Staudt did sob for joy. Palmason, totally unretired at age 42, finishing 30th in 2:57:07. E. Sisk, I. Allen and J. Durbin also show in the results as representing Canada.

Once again, in an historic race, Canadian women were there, running well, helping create a sport that has since outgrown all restrictive prejudices, and has become totally inclusive.

Roger Robinson is the foremost running historian in the world. He’s also married to Kathrine Switzer, a living legend of the sport.