Middle distance and distance running is on the rise in Canada. In 2019 alone, six national records have fallen on the track and of those records, five have been broken by women. Behind the athletes who are making a name for themselves in Canadian and international sport are great coaches, and the good news is, a lot of these stellar Canadian coaches are also women.

Brit Townsend, Paula Schnurr and Lynn Kanuka each coached a 2018 national champion and have each represented Canada at various Olympics. After their own professional running careers, they began volunteer coaching.

Townsend is the head track and field coach at Simon Fraser University and is a two-time Olympian and former Canadian record-holder over 1,500m, 800m and one mile. She has since coached athletes to all levels of competition, including the Olympics. Currently, one of Townsend’s strongest athletes is Lindsey Butterworth, the 2018 national 800m champion. Townsend’s been a coach at SFU for 20 years, and has guided the team to hundreds of NAIA and NCAA Division II individual titles and dozens of team titles. 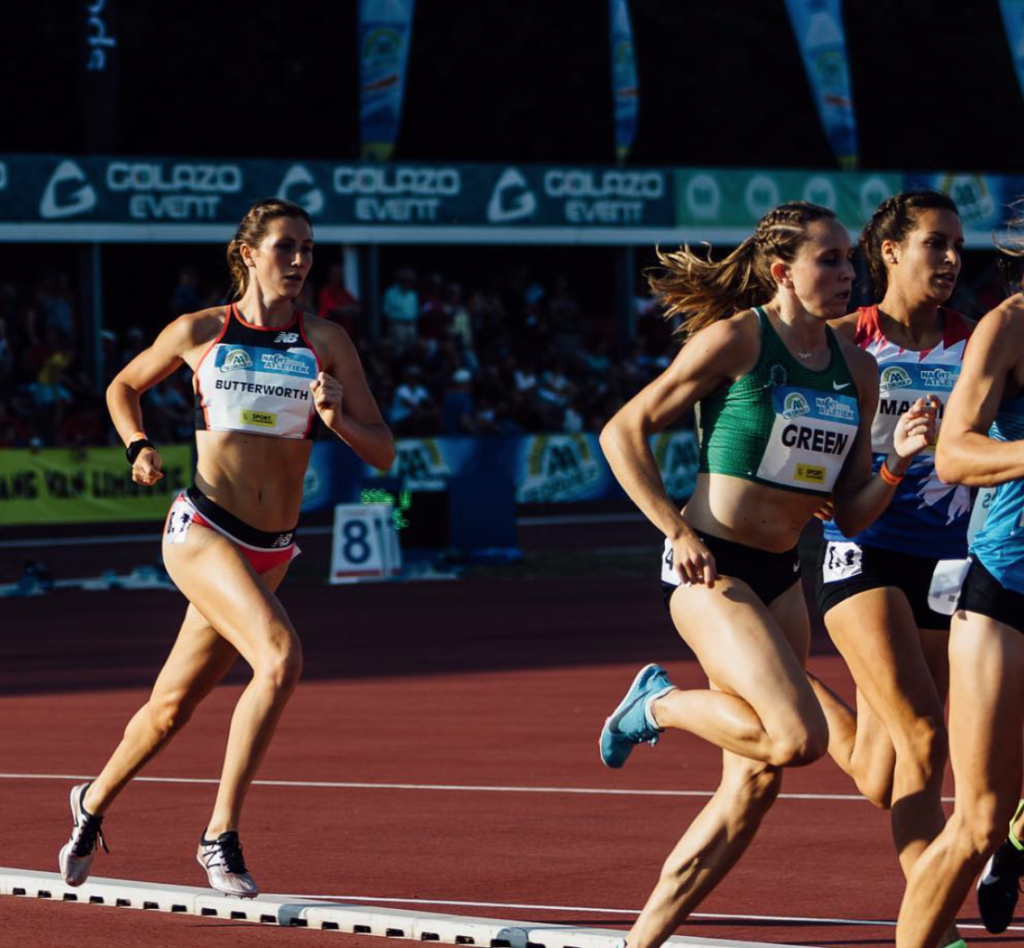 When Townsend first went to the National Coaching Institute, she describes being very pregnant and one of the only women in the room. “I was the only female head coach in the NAIA when I started out in 1998. I’d go into business meetings and every now and again see another woman, but it was rare.”

Townsend says that you don’t make it as a female coach without being very strong-minded and confident. Some of this confidence she learned during her time as an elite athlete. “This is especially the case when you’re the only female coach. It took a while for the male coaches to respect my ability to coach athletes at this [university] level. That changed once I had a lot of success at the NAIA level. Then people started to email me to ask what I was doing in my training. I gained respect, but it had to come from my athletes’ performances.”

Townsend has two daughters, who she says grew up at the track. “I was lucky enough to be able to afford to travel with them. They came everywhere with me. I would get some of my senior athletes to babysit during meets. I wanted to coach, and I wanted to be present for my kids, so I didn’t see any other option than for them to come with me everywhere. It was really hard, but really fulfilling.”

The Olympian also described an initial challenge in getting the men she coached to believe in her program. “The women bought in more than the men did in the early days. And now I have more men going to the national championships than I do women. It’s about gaining respect and trust through being really confident in what you’re giving to them.”

Paula Schnurr is the head coach of track and field and cross-country at McMaster University. Schnurr is a two-time Olympian over the 1,500m who coached Sergio Raez-Villanueva to a 10,000m national title in 2018.

Schnurr started coaching right after she graduated from university, while she was still pursuing professional running. “There wasn’t a full-time head coach position at McMaster when I started coaching. I was teaching elementary school part-time, running at an elite level and helping coach. I went into teaching mainly because I wanted to coach. I’d had so many positive things come from sport that I felt like it was important to give back to athletes.”

Schnurr got the head coach position at McMaster when her predecessor left his position to help take care of his young family. “I was in the right place at the right time. I also have never had children, so that allowed me to commit to weekends away, not being home during dinner time, things like that.” Schnurr suggests that the traditional female role is likely a big factor contributing to the low number of female coaches. “Coaching happens at the critical times of the day when women are supposed to be looking after the home and the children.”

Lynn Kanuka is the current Canadian 1,500m record holder at 4:00.27 and has been coaching for 30 years. She coaches Canadian 10,000m record-holder Natasha Wodak, who also won the Canadian 5K championships in September of 2018. Kanuka says she started coaching right after her professional running career had finished. “Right away I became pregnant and got involved in coaching at the local elementary school. I started in the kids program and everything grew from there. About a decade ago we co-founded the Ocean Athletics Track Club.”

Kanuka has never held a position as a university coach or worked directly for Athletics Canada, and not for lack of want, but because her life didn’t line up that way. “I considered applying for university and college positions. I looked in the the States and across Canada, but the timing didn’t work out. I was a single mom for 15 years. It was a huge juggle trying to keep everything together. I think that traditionally, men dictate where the family decides to reside, and because of my family I wasn’t in a position to move.”

That being said, Kanuka doesn’t regret how things turned out in her coaching career. “I’m able to do a lot of my work online, and I was able to manage coaching around having a young family.” She jokes that her kids spent a ton of time at the track. The 1,500m record-holder says she’s felt frustrated in the past, and at times like she hasn’t received the credit she deserves for her coaching and mentoring, but she’s thankful for the recognition that some of her female colleagues have received for their work in the sport.

Townsend, Kanuka and Schnurr are interested in seeing female coaching grow in Canada. It’s not that their male colleagues aren’t doing a great job, it’s that coaching on the whole needs a bump in female representation. Canadian athletics is lucky to have these three women, and they are hoping to inspire the next generation of female coaches.