As the Olympics have transitioned into track and field from road cycling and swimming, there is a debate on Twitter on why all track athletes do not wear aerodynamic suits, as cyclists and swimmers do.

Bahamian 400m sprinter Steven Gardiner won the 400m semifinals in a speedy time of 44.14, which put him into Thursday’s final. 44 seconds for 400m is spectacular, but fans on Twitter were more impressed he ran that time while wearing an oversized Bahamas training T-shirt. Our sources did not confirm if he actually forgot his race singlet in the Athletes’ Village, or if he just prefers his sleeves flapping in the wind. Gardiner was the inspiration for the Twitter debate about the aerodynamics of sprinters’ racing kit. (Spoiler alert: we published this story the day before the 400m final, which Gardiner would go on to win in 43.85, wearing appropriate racing attire, but still an untucked shirt, not unlike many others.)

Steven Gardiner wins heat 3 in a baggy t-shirt. 44.14 has to be some kind of t-shirt world record.

Michael Norman moves on to the final. pic.twitter.com/rTAhBYrLUb

Aerodynamics refers to the concept of forces resulting in the motion of objects through air. The study of the motion of air around an object allows us to measure how gravity and resistance work while the object travels through it.

Steven Gardiner posting 44,14 in what looks like his dad's t-shirt is a whole new mood pic.twitter.com/9Kt6ISVhCp

RELATED: How much does wind slow you down?

As we’ve seen, aerodynamics are very important to cyclists. Any stray fabric flapping in the breeze is potentially slowing them down. On a flat road, aerodynamics are by far the greatest barrier to a cyclist’s speed, accounting for 70 to 90 per cent of the resistance riders experience when pedalling. The only greater obstacle is climbing up a hill, as gravity far outweighs the effect of wind resistance. Over the past five years, there has been a major development in more stretchy, lighter and breathable fabrics for cyclists to slice through the air while competing at high speeds.

Technology is constantly evolving to benefit the athlete and allows them to operate at a high level of performance. At these Olympic Games, male and female athletes are given a choice on what they can wear during competition. In certain events such as the 10,000m, where you have to run 25 laps around the track, a majority of distance athletes will wear the classic singlet and shorts, due to their loose-fitting and comfortable feel for 30 minutes of high-intensity running. During a 10,000m race, speed does help, but cutting the air is less important, as most runners will reach a top speed of 25 km/h and will remain tucked into a pack for most of the race.

When Eliud Kipchoge broke the 2-hour marathon barrier at the INEOS 1:59 Challenge in Austria, scientists at Eindhoven University in the Netherlands analyzed wind formations when running at 21.2 km/h. They ended up proposing a special arrangement of runners who would pace around Kipchoge in order to lower his output of power against resistance, which ultimately allowed him to perform at a higher level. This formation is very similar to those in a bike peloton at the Tour de France. The athlete who takes the wind has to work harder than the athlete tucked in behind him.

RELATED: Why Eliud Kipchoge needs to win his next marathon

Unfortunately, sprinting events do not have the luxury of pack-aided performance. When Usain Bolt set the 100m and 200m world records, he achieved his top speed of 45 km/h in a singlet and half tights. According to scientists, when a human reaches a speed faster than 40 km/h, 80 per cent of the human’s power output goes into overcoming air resistance and gravity. During his six gold medal performances in the 100m and 200m, Bolt never used the aerodynamic speed suit. Who knows what he could’ve run wearing 400mH champion Karsten Warholm’s Puma speed suit?

A few of the world’s top track athletes are beginning to transition to the speed suit to gain any aerodynamic benefits they can. Norway’s Jakob Ingebrigtsen and Mohammed Katir of Spain, two of the fastest men on earth over the 1,500m and 5,000m distances this year, were both wearing one-piece speed suits during their Olympic heats. Newly crowned 800m gold medallist Athing Mu has been racing in wind-cutting suits since turning pro earlier this year. Clearly, science has proven wind-cutting technology can make a difference, but World Athletics, the governing body of track and field, gives each athlete a strict guideline on what can be worn during competition at the Olympic Games and World Championships:

According the World Athletes under rule 143 section 5 of World Athletics – competition and technical rules:

“In all events, athletes must wear clothing which is clean, designed and worn so as not to be objectionable. The clothing must be made of a material which is nontransparent even if wet. Athletes must not wear clothing which could impede the view of the Judges. At all competitions under paragraphs 1.1, 1.2, 1.3, 1.6 and 1.7 of the International Competition definition, and when representing their Member Federation under paragraphs 1.4 and 1.8 of the International Competition definition, athletes shall participate in the uniform clothing approved by their Member Federation. The Victory Ceremony and any lap of honour are considered part of the competition for this purpose.”

In short, this means that all athletes competing have to abide by the competition rules of their countries’ athletic governing body, which must abide by the rules and regulations set by World Athletics.

At these Games, men and women are given the choice of three options for competition; a singlet and short shorts, one-piece aero-speed suit, or (a combination of speed and comfort) a singlet and half tights – the best of both worlds. Women are offered one more option, with the crop top and short shorts. 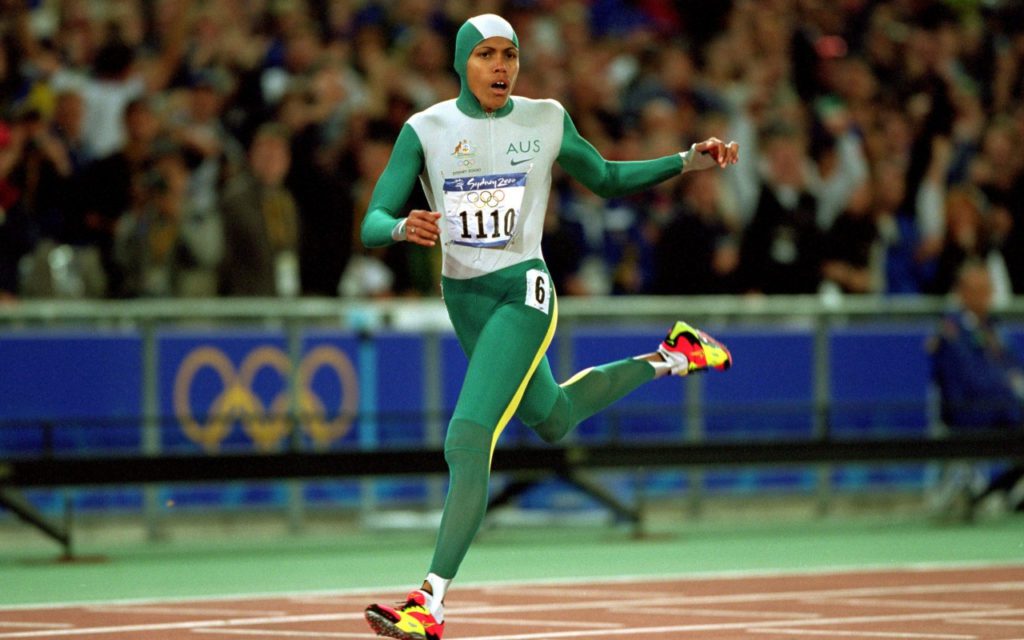 As technology advances, the world’s best athletes continue to chase world records. The athletes will always lean towards wearing the lightest or fastest gear to give their performance a slight edge over competition. Who knows? Maybe the Sydney Olympics gold medallist, Cathy Freeman, was ahead of her time when she won the 400m in a head-to-toe speed suit.