There is no better feeling than finishing a run, uploading it to Strava and finding out you snagged the course record on the “dirt path to the park” segment. (Strava segments are short sections of roads or trails created by members where athletes can compare their times.)

Strava segments provide us with friendly competition between runners. Although they have no worth or monetary value, the clout of having your name at the top of the leaderboard for that segment is all some runners need.

We did our research and found some of the most competitive segments in cities across our great nation. These segments that you see below may take unofficial world records to break, but even cracking the top 10 is an achievement. 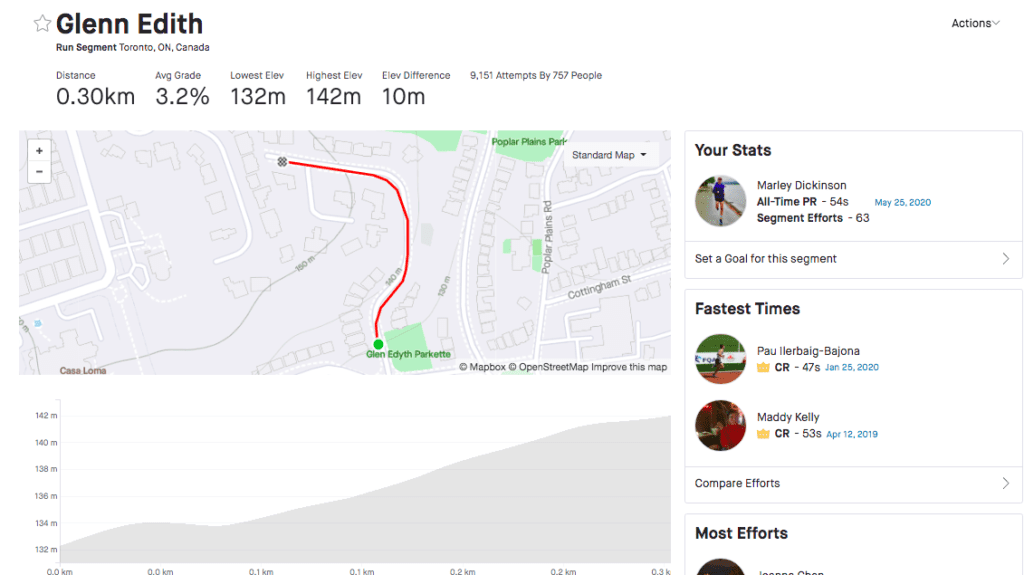 This 300m dead-end hill sprint segment is a popular spot for Toronto’s top middle-distance runners. The segment has 10 metres of elevation gain. Tokyo 800m Olympian Madeleine Kelly has the women’s CR in a time of 53 seconds, which is approximately 2:24/km with grade-adjusted pace and equivalent to a 42-second 300m. The crown belongs to middle-distance runner Pau Ilerbaig, who currently runs track for MIT in Boston, covering the hill in 47 seconds. 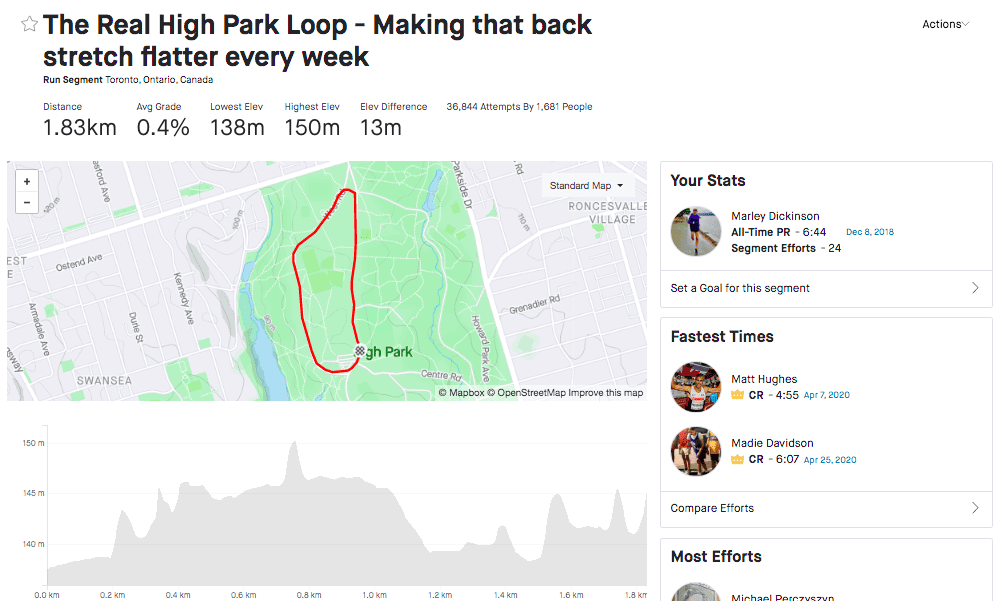 Toronto’s High Park is a popular running destination for many Toronto runners, with a paved 1.8km loop with subtle inclines. This segment attracts a lot of distance runners for tempo runs and long interval training. The segment has over 40,000 attempts, but a Canadian national record holder has the top spot. 3,000m steeplechase Olympian Matt Hughes, who finished 6th in the Tokyo Olympics, covered a lap of Toronto’s High Park in 4:55, which is 4:19-mile pace. To even get inside the top 10 on this segment, men will need to come through the mile marker in under 4:50. Madeleine Davidson, an elite distance road runner with a 10K PB of 33:53, is the queen of this segment, covering it in 6:07. 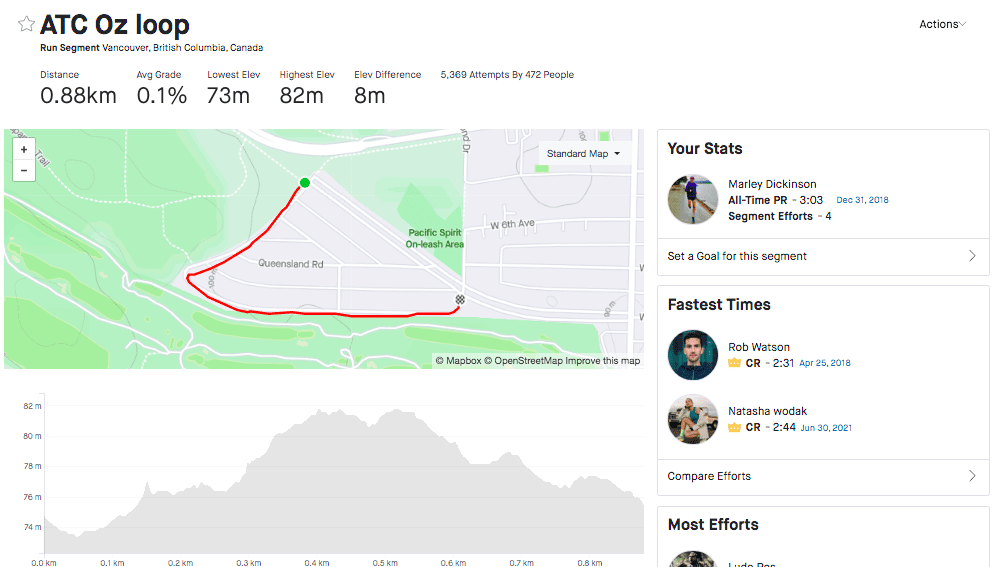 The “Oz Loop” is a highly contested segment based in a little neighbourhood off Vancouver’s West 4th Ave. In this neighbourhood, all the streets are named after Australian cities and the segment is a point-to-point lap. The crowns are held by B.C-based Olympians Natasha Wodak and Rob Watson. To crack the top 10 on this segment, runners will need to be able to run a sub-2:30 800m uphill. 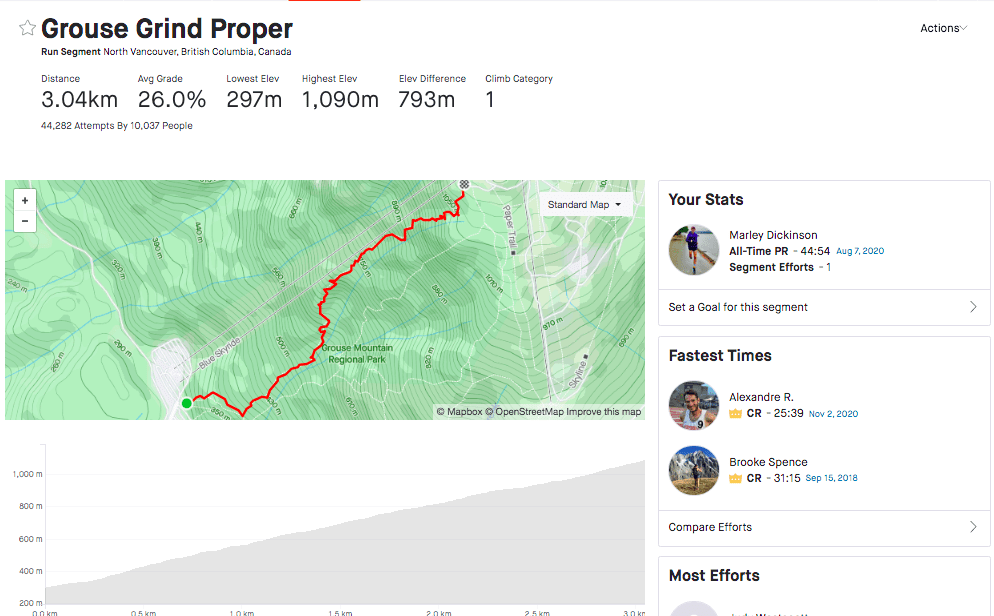 The Grouse Grind is one of Vancouver’s most popular tourist attractions. According to Grouse Mountain Tourism, over 150,000 people hike the trail annually. For the average person, it takes an hour and a half to complete. To reach the summit of Grouse Mountain, runners must climb 793 metres over three kilometres. Some of Canada’s fastest distance runners have taken a stab at this segment, but it’s the technicality of the climb that makes the segment one of the toughest in Canada. Alexandre Ricard, a track-runner-turned-trail-runner, holds the fastest time up the grind in 25:39. BC-based trail runner Brooke Spence holds the women’s crown of 31:15. 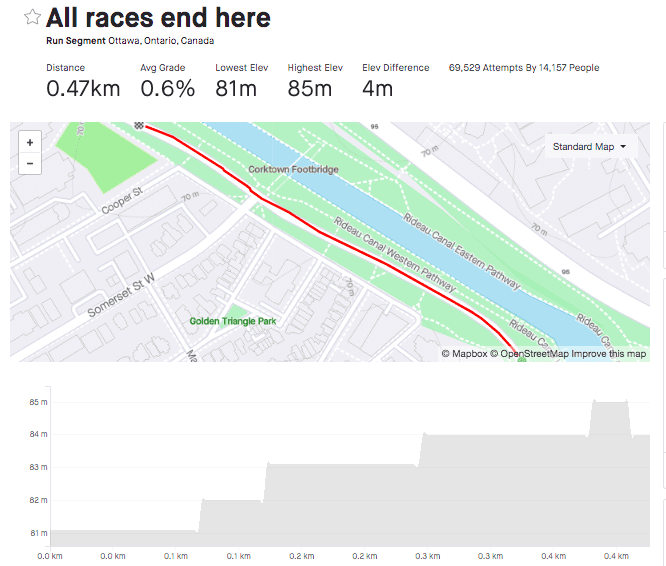 This segment in Ottawa makes is the last 500 metres of every Ottawa Race Weekend race and has almost 70,000 attempts. Two Olympians currently hold the course record on “all races end here,” as they both sprinted towards the finish line of the famous Tamarack Ottawa 10km. Natasha Wodak is the queen of the segment, covering the 500m in 1:29, and 11th place Tokyo Olympic marathoner from Morocco, Mohammed El-Aaraby, holds the men’s crown in 1:19. 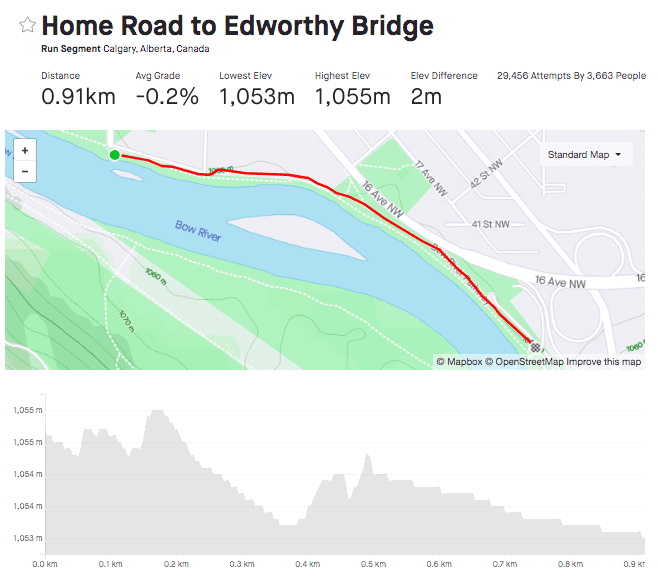 The Bow River in Calgary is a popular running destination with picturesque views along the waterway. The Bow River is also home to “Home Road to Edworthy Bridge,” one of the most competitive segments in Calgary. The top 10 athletes on this segment feature Olympians and collegiate cross-country champions, but the crowns are held by 2017 Canadian Mountain Running champion Matthew Travaglini and competitive Canadian trail runner Alex Harriss.

A post shared by View from Parc Mont Royal (@mont.royal.view) 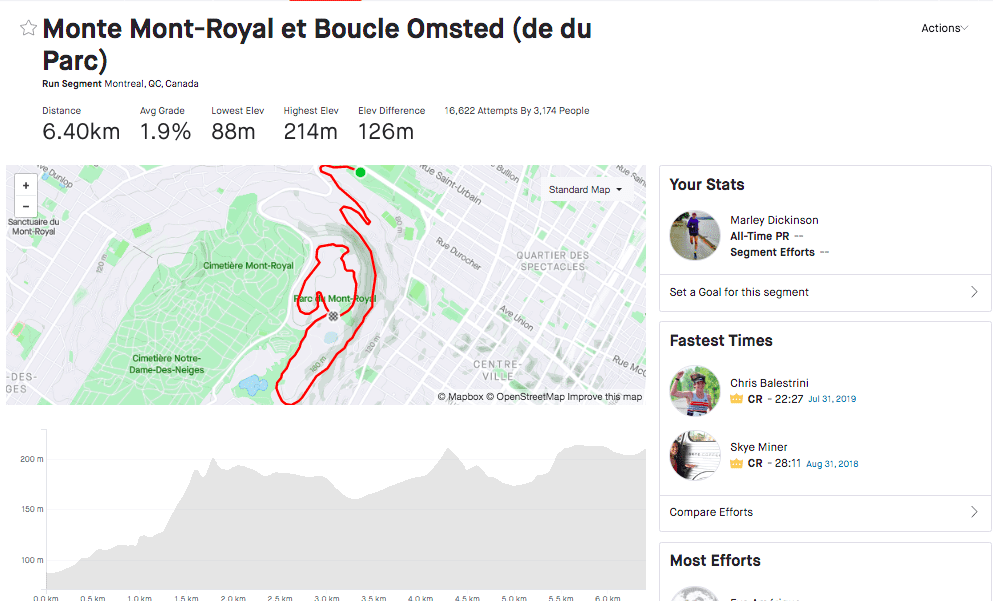 Similar to the Grouse Grind, Mont-Royal is an attraction for active tourists visiting the city. The path up Mont-Royal is steep, climbing 100m within the first two kilometres. Three kilometres into the climb, the terrain turns into rolling hills as you get closer to the lookout point. Canadian 50K record holder Chris Balestrini covered the 6K climb in 22:27, earning him king of Mont-Royal, alongside the queen of the climb, American runner Skye Miner. 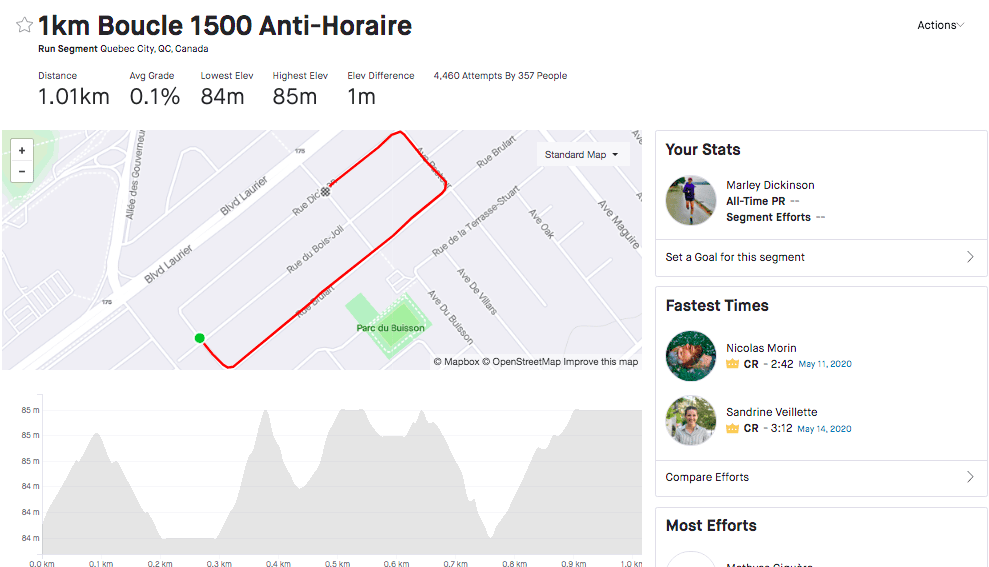 This 1K segment in Quebec City is as competitive as it gets, with the top 10 men and women on the leaderboards all within 10 seconds of one another. This segment is a popular training spot for the University of Laval cross-country team. Middle-distance runner and 2018 U Sports silver medallist Nicolas Morin holds the fastest time on the segment, at 2:42. The queen of the segment is Sandrine Veillette, a cross-country runner for McGill University. 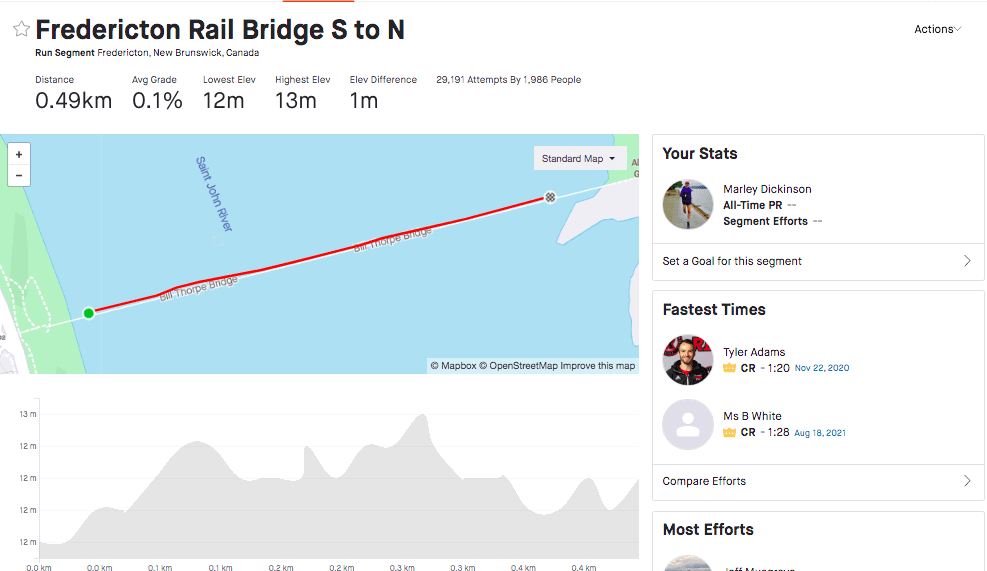 Bridges are highly contested segments for obvious reasons, as runners use them to get from one side of the city to another. In Fredericton, N.B, which is divided by the Saint John River, there are many bridges for runners to test their speed on. The Rail Bridge is a 500m flat segment connecting south Fredericton to the north. To get in the top 15 on this segment, runners must crack 1:30 for 500m. Tyler Adams, a middle-distance runner for the University of New Brunswick, holds the crown in 1:20. 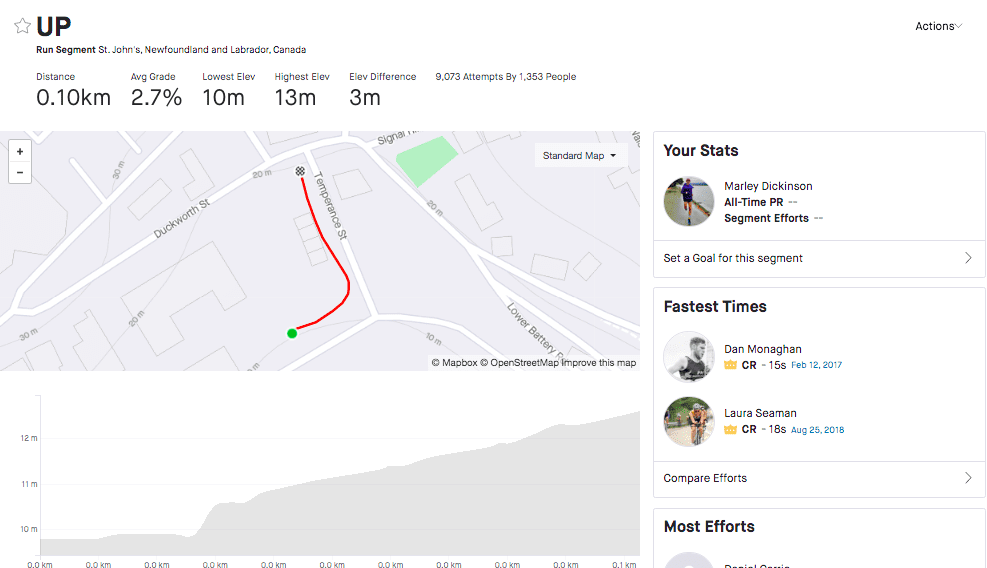 St. John’s, Nfld. is known for being far from flat, and the historic houses of Temperance Street create an incredible setting and sprint segment for many local runners. Temperance Street has a steep average gradient of 4.5 per cent over the short segment. The top 20 times on the segment are all within four seconds of one another, with the crown belonging to runner/cyclist Laura Seaman.