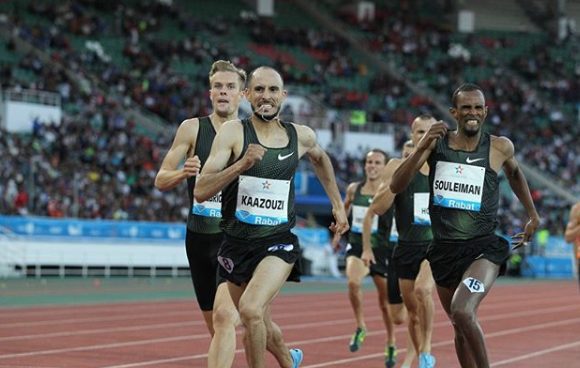 With the Diamond League final only days away, we’ve complied a list of the top earners in the 2018 Diamond League regular season. Below are their earnings from Diamond League competition alone, without considering their sponsorship deals and other race winnings.

The Diamond League puts a big emphasis on place in the race, which is why their prize money drops significantly from first to second ($10,000 USD to $6,000 USD). Because of this, points earned doesn’t necessarily correlate to overall winnings. The below rankings also only include earnings from a runner’s primary event.

Catch the Diamond League finals August 30th in Zurich and August 31st in Brussels. All the action will be streamed live on CBC.ca.

Samba Abderrahman comes in on top with a shocking 48 points. The 400m hurdler from Qatar has earned a perfect score in the regular season, with six wins in six races. This has earned him $60,000 USD in prize money going into the final. If Abderrahman can pull off a win in the final next week, he could earn himself a perfect Diamond League season and a total of $110,000 USD.

Second place goes to Salwa Eid Naser with 39 points. The 400m runner from Bahrain remains nearly undefeated in the event. She won Lausanne, Stockholm, Oslo and Paris. She was second to Libania Grenot in Monaco. Eid Naser has accumulated $46,000 USD.

Francine Niyonsaba of Burundi comes in with 43 points accumulated in the regular season. The 800m runner was first in Lausanne and Rabat, and then second to Caster Semenya in Oslo, Paris and Monaco. Niyonsaba was third in Eugene. She’s made $42,000 USD so far this season. Semenya has made just shy of what Niyonsaba clocks in at, winning $40,000 USD for her four wins over 800 metres.

American sprinter, Brianna McNeal, has accumulated 38 points in the 100m hurdles. She was first in Shanghai, Stockholm and Rabat, then second in Doha and London. She’s made a total of $42,000 USD.

American Noah Lyles, Kenyan Timothy Cheruiyot, and Marie-Josee Ta Lou of the Ivory Coast, have all accumulated 32 points after winning four events. Each of these runners has earned $40,000 USD after going four for four.

Dalilah Muhammad of the USA and Janieve Russell of Jamaica have battled back and forth all season in the 400m hurdles. Russell has come out on top with $34,000 USD and 36 points, just edging out Muhammad who’s accumulated 34 points and $33,000 USD.

Murielle Ahoure of the Ivory Coast has earned 37 points. The 100m runner has a total of $33,000 USD for her efforts this season.

Be sure to keep your eyes on these talented runners as they head into the finals stretch of their 2018 outdoor season, and the Diamond League final.