Usain Bolt, who can make history at the Rio Olympics if he wins triple gold for the third consecutive Games, has a fondness for McDonald’s Chicken McNuggets. In 2013, Time reported that Usain Bolt ate 100 McNuggets per day during the 2008 Olympics.

Bolt, who arrived in Rio recently for the Olympics, posted photos and videos on Snapchat of him enjoying a box of Chicken McNuggets in the Athletes’ Village. See here for Bolt’s Snapchat username as he posts regular updates from Rio.

RELATED: Usain Bolt not worried about Zika, claims that he’s too fast for mosquitoes.

The fast food chain has been an official Olympic sponsor since 1976. As is the case for all restaurants in the Olympic village, food is free. And while many athletes may opt for fast food after their respective events, Bolt finds comfort in eating McNuggets on the daily while at the Olympics. 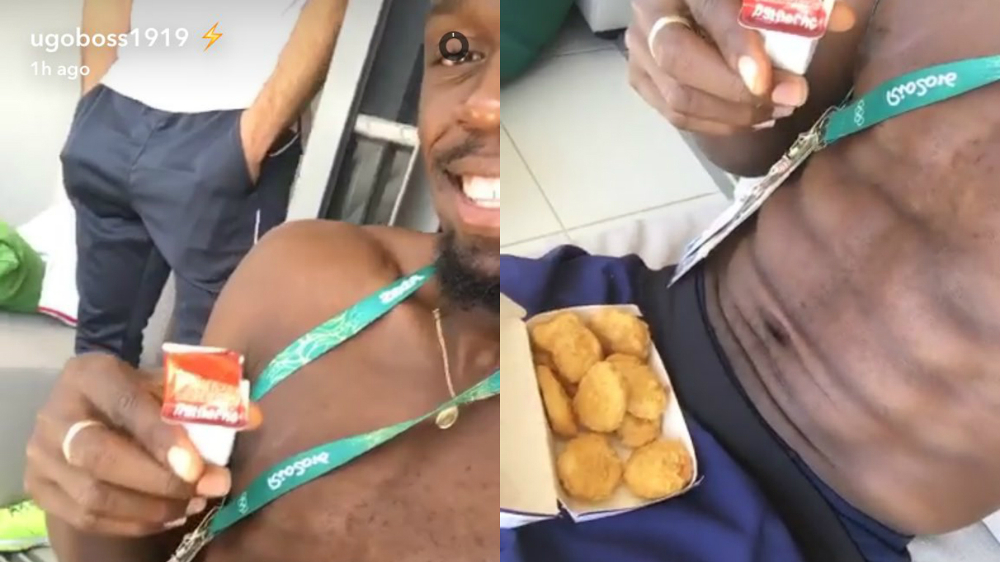 RELATED: Usain Bolt says he’s a ‘Belieber’ during Snapchat Q and A.

One athlete posted the below photo to Instagram showing how busy the McDonald’s in the village has been.

Bolt, who won gold in the 100m, 200m and 4x100m relay at both of the previous two Olympics, has the chance to accomplish the triple-triple in Rio. He is slated to run all three events for Jamaica and holds the world record in all three sprint events.

RELATED: 10 Snapchat accounts you should be following if you’re a running fan.

Bolt has been battling injury this season and dropped out of Jamaica’s Olympic Trials with a grade one hamstring tear. He was selected to Jamaica’s Olympic team based on medical exemption but raced in London in late July signalling his return to form.

The 29-year-old posted an earlier photo to Twitter referencing a non-fast food chain meal thanks to a personal chef in Rio.

Lunch time thanks to our Jamaican chef.. pic.twitter.com/JNjkkP1zUu