Cancer is a devastating disease, and few Canadians have been left untouched by its far-reaching effects. Whether it’s a friend, family member or acquaintance, we all know someone who has battled the deadly disease. Vancouver runner Stephanie Kurz lost her best friend to cancer, and for the last nine years she has taken on physical challenges in support and memory of her. This year, she will be completing a 100km versus 10 x 10km challenge to raise funds for the Terry Fox Foundation. 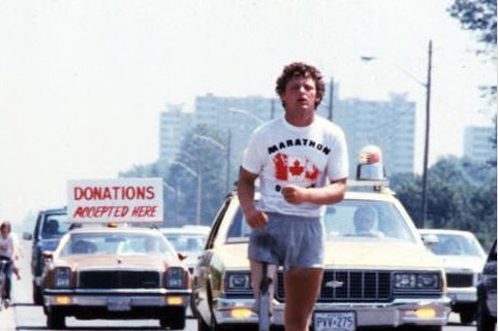 Kurz ran track when she was in school, but ended up focusing on volleyball. After competing on the volleyball team at the University of British Columbia, she went to Europe to play professionally for a few years, until a shoulder injury forced her to stop. She picked up running again when she returned to Vancouver and completed several half-marathons.

Her best friend, Tegan Carmichael, was diagnosed with a brain tumor in 2010, and in 2012 Kurz, Carmichael and a few of their friends completed the Ride to Conquer Cancer together. That first ride was the beginning of an annual tradition for Kurz, completing a physical challenge every year in honour of her friend. Since then she has done another Ride to Conquer Cancer, a 200-kilometre Sunshine Coast Ride, a 130-kilometre North Shore Triple Crown ride, the Boston Marathon, the Baden-Powell Centennial Trail run, two 100-kilometre ultramarathons and one 100-mile (160km) ultra.

“I know a lot of people who have had cancer or who have cancer right now,” explains Kurz, “and no matter how tough it gets out there for me, I can tough it out for that time period. These people, what they have to go through and fight, they’re doing it constantly.”

Sadly, Carmichael passed away in February 2019, but Kurz has continued doing challenges in her memory. Last year, she decided to make her 100km run more interesting by inviting 10 people to complete a 100-kilometre relay while she ran, each person running 10 kilometres. Running virtually due to COVID-19 restrictions, the relay team finished in 10 hours, 53 minutes and Kirz finished only 20 minutes behind them in 11 hours, 15 minutes.

The relay challenge went so well that she decided to do it again this year. On Saturday, May 29 Kurz will be running 100 kilometres, while 10 of Carmichael’s friends and family from across the country will be completing the 10-person relay. Five of those participants are located in Vancouver, but the other five are spread out across Canada in Montreal, Edmonton, Vancouver Island and the Yukon.

Since 2012, Kurz has raised nearly $35,000 for the B.C. Cancer Foundation and the Terry Fox Foundation. This year she has set a modest fundraising goal of $5,000, but if history repeats itself, she should be able to far surpass that goal. As she prepares for her big run at the end of the month, Kurz wants to give a big shout-out to her trainer, Jenna Maxwell, for helping her prepare and providing support on race day, her physiotherapist Jay LeGuilloux who’s been keeping her healthy, her friend Jasmin Yip who will be providing bike support and to the local running store, Rackets and Runners, for keeping a fresh pair of shoes on her feet throughout her training. If you’d like to support Kruz, you can visit her fundraising page to make a donation.