With less than a month to go until the Olympics are scheduled to begin on July 23, polls out of Japan show that as many as 83 per cent of Japanese citizens do not want the Games to proceed as scheduled, and up to 43 per cent support a complete cancellation. One can hardly blame them. As more contagious variants of COVID-19 emerge and organizers press on, it does not take an expert to point out how irresponsible it would be to bring athletes from around the world to a central location (though medical experts in Britain have done just that). The pandemic has created exceptional conditions that have allowed the world’s wealthiest to accumulate outrageous profits as the public has suffered, and staging the Olympics will continue this trend. Canadian athletes should recognize this and take a stand against corporate greed by boycotting the Tokyo Olympics.

Even during non-pandemic times, the Olympics are controversial. As Jules Boykoff argues in his book Celebration Capitalism and the Olympic Games, “The Olympics have become a massive, planned economy designed to shield the rich from risk while providing them a spectacle to treasure.” Indeed, past Olympic Games have left a trail of public debt while primarily benefitting private broadcasters, security companies and land developers. One case Boykoff explores in his book is the Vancouver 2010 Olympics, where billions of public funds went into the pockets of property investors and security companies, some of which was used to police Indigenous protesters who were asserting that the events had no right to be held on their unceded
territory.

These unjust aspects of the Olympic Games will be exacerbated if they are held during the current global crisis. Pfizer, a billion-dollar pharmaceutical company, has donated vaccines to the International Olympic Committee (IOC) for distribution among athletes and officials. Those vaccines should be distributed among disadvantaged populations to curb the global spread of COVID-19 instead. The IOC has also reaffirmed its commitment to uphold Rule 50 and punish athletes looking to make political statements within Olympic venues — including those wearing “Black Lives Matter” apparel. This rule is especially hypocritical, since the Olympic website still promotes the image of Tommie Smith and John Carlos standing against racial discrimination in 1968. 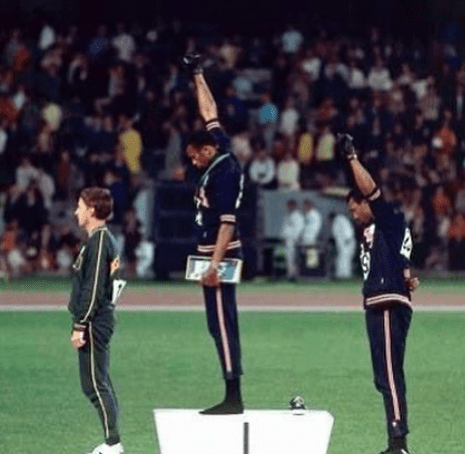 Considering the many issues related to these Olympics, one would hope to hear a few more athletes speaking out. The good news is that we have. Gabriela DeBues-Stafford has taken to Twitter to voice her disapproval of Rule 50, Evan Dunfee has stated it would be unethical for Olympic athletes to jump vaccine queues, and ex-Canadian Women’s Hockey Team captain Hayley Wickenheiser has wondered if the Games should go on at all – stressing that big businesses should not be the ones making the decision. These individual statements encouraged more discussion, but it takes a unified stance and material action to achieve justice.

I have competed for several years at the university level, so I have some understanding of the level of commitment it takes for us athletes to exceed in sport, and I would guess the bar is drastically higher for world-class athletes. I have also experienced how our identities can revolve around our sport. We can easily tune out the world around us as we focus on our singular goal. I can imagine it would be extremely difficult for someone like Melissa Bishop-Nriagu, who has worked tirelessly to regain elite fitness after giving birth three years ago, to boycott the Olympics. I doubt it would be a great feeling for Julie-Anne Staehli or Natalia Hawthorn either, as they have brought their Olympic dreams within reach this year by running massive personal bests in the 5,000m; ditto for John Gay in the 3,000m steeplechase. Wickenheiser mentioned the drawbacks of this unwavering athletic drive in her CBC interview: “I would go at any cost. You almost need someone else outside with less invested than you to say it is or isn’t worth it.”

RELATED: Julie-Anne Staehli on consistency, mindset and the pursuit of a goal

For an athlete, giving up the Olympics can be the equivalent of putting a lifetime of effort to waste; however, when we take a step back and empathize with the citizens of Japan, it’s clear we should not favour lifetimes of effort over actual lives. If the Games go ahead, the Japanese people will be forced to deal with thousands of foreign travellers entering their country in the middle of a public health crisis. This will lead to more sickness and death, no matter how many protocols are planned. Tokyo Olympic organizers recently asked 500 nurses to volunteer for the Games. In no instance is it fair to divert essential workers from the public so that athletes can compete and generate revenue for corporate investors. The fact that this was even considered proves Boykoff’s point about how the Olympics shield the rich from risk while providing them with a spectacle.

The IOC defines Olympism as a “philosophy” that “seeks to create a way of life based on the joy found in effort, the educational value of good example and respect for universal fundamental ethical principles.” There is nothing ethical about what the IOC is planning right now for the people of Japan, and I am not sure how athletes can find joy in competing at these Olympics unless they completely ignore the cost.

It’s easy for me to say that Canadian athletes should take it upon themselves to boycott the Tokyo Olympics. In reality, it is a lot of organizing to expect from athletes who are a month out from their peak performances. At the very least, this needs to be a wakeup call for athletes and fans to start building solidarity against injustice instead of continuing to go along with it. If we want to see the Olympics morph into an event that is planned in the interest of people instead of corporate profits, it’s not going to happen through existing power structures that reinforce the status quo. We need to work together to organize an alternative ourselves.

Evan Ubene is a Master’s student at McMaster University, where he competed on the cross-country and track and field teams for four seasons and was injured for two others. You may know him better by his Twitter persona, Not Trackie (@RunningHotTakes), where he provides lighthearted running commentary that is likely funnier to him than to everyone else.