Ten days ago, Brigid Kosgei, 25, won the Chicago Marathon for the second year in a row, and her 2:14:04 smashed Paula Radcliffe’s world record of 2:15:25 by a minute and 21 seconds. For 16 years, no one even came close to threatening Radcliffe’s hold on the women’s marathon mark, while the men’s was re-written no fewer than seven times during the same period. Naturally, it will take us all some time to replace her in our mental databases. But that aside, if you asked 10 random runners which significant running world record was broken during the weekend of October 12-13, we reckon at least half would assume you were talking about Eliud Kipchoge’s electrifying sub-2 in Vienna–which, despite being the fastest marathon ever run, wasn’t a world record. (Some might even say that, thanks to INEOS 1:59, Kosgei didn’t get anywhere near the attention she should have received.)

This is not to take anything away from Kipchoge–though the scheduling of INEOS 1:59 on the same weekend as a World Major Marathon was unfortunate. No one could argue with his status as one of the most incredible athletes in history. His run in Vienna had people around the world getting up at all hours of the night to watch him finally break the two-hour barrier, paced by a phalanx of Diamond League, world championship and Olympic medallists (all of them Nike athletes) like Bernard Lagat, Paul Chelimo and the Ingebrigtsen brothers–not simply because they wanted to see history being made in real time, but because of the years of incredible performances Kipchoge has delivered, winning 12 out of 13 marathons and setting the official world record (at 2:01:39) in Berlin last year.

Kipchoge’s unflappable confidence and Yoda-like pronouncements on life and running have inspired thousands (maybe even millions), and he has more than earned the outpouring of adulation and respect the project generated. The sight of him waving off his pacers, beating his chest as he sprinted past the finish line, then resumed his sprint to high-five spectators, with a Kenyan flag draped around his shoulders, moved many us to tears. 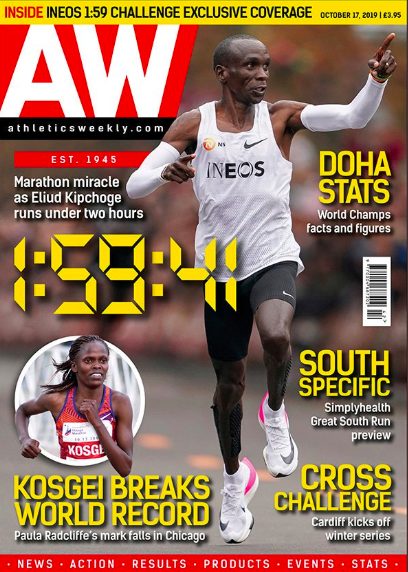 What made it great?

But while Kipchoge was doing his thing in Vienna, Kosgei was quietly preparing herself for what would turn out to be the most significant achievement yet in the history of women’s running, only there was no fanfare, and nobody, including her, knew it was going to happen until she broke the tape. There are a number of reasons to look upon Kosgei’s achievement with even greater admiration than Kipchoge’s.

As others have already pointed out, Kosgei broke a world record in a sanctioned race on a record-eligible course (something many would still like to see Kipchoge do)–a race that opens its start lines to tens of thousands of regular folks every year. As far as we can tell, she wore the Nike Vaporfly NEXT%, a shoe that some have suggested should be banned because of its performance-enhancing properties, but which is available to anyone with $330 to spend on running shoes (one criterion for shoe legality, according to the IAAF). Kipchoge, for his part, wore a not-yet-released prototype of Nike’s most outrageously souped-up shoe yet–the AlphaFly, which has multiple carbon-fibre plates and a system of air, fluid or foam-filled pods in the forefoot–and his achievement is widely acknowledged to have been inconceivable without the shoe tech.

Kosgei didn’t come out of the blue on October 13, even if she was cautious about letting the world know she planned to contest Radcliffe’s record if all went well. In 2019, she set a new personal best in every event from the 5K through the marathon. Her 10K personal best is 29:54 (only 11 seconds off Joyciline Jepkosgei’s WR of 29:43) and her half-marathon PB is 1:05:28, 37 seconds off the WR, also held by Jepkosgei.

Her first 42.2K was in 2015 at the Porto Marathon in Portugal, where she finished in 2:47:59. Since then she has steadily whittled down her time: 2:24:45 at Lisbon in 2016, and a four-minute personal best (and hitting the coveted 2:20) with her 2:20:22 in Chicago in 2017, where she finished second to Tirunesh Dibaba. She scored her first victory in 2:18:35 at Chicago last year (in the third-fastest time in women’s marathon history) and another victory in 2:18:20 at London this year. On September 8 she ran 1:04:28, the fastest half-marathon ever recorded by a woman at the Great North Run in Newcastle, UK (which didn’t count as a world record because it’s a point-to-point course).

Kosgei is obviously in fantastic shape, but even for her that's too fast. pic.twitter.com/mGm2vNDhSU

Until October 13, the closest anyone had come to threatening Radcliffe’s record was Mary Keitany’s 2:17:01 at the 2017 London Marathon. There are various theories about why this is so. After Wilson Kipsang broke the world record in 2013 (the fifth time that record had gone down since Radcliffe’s 2003 run), American record-holder Deena Kastor told Runner’s World she expected Radcliffe’s would last “decades longer”– which hasn’t turned out to be the case, but it did last another six years (and it was three and a half years before Keitany’s breakthrough).

Radcliffe was known to have a VO2 max and running economy value that gave her outlier status. According to a 2015 study by Michael Joyner et al, the women’s equivalent of a sub-2 had already happened, and Radcliffe owned it at 2:15:25. The authors claimed that a 12 to 13 per cent sex difference was more appropriate than the a 10 per cent previously assumed, and that Radcliffe’s WR was the equivalent of a two-hour marathon for women. And a Runner’s World story described how exercise physiologist Jack Daniels’ VDOT system, which takes into account both a runner’s VO2 max and their running economy, found that Radcliffe’s performance was of significantly higher quality than the men’s records to that point.

Of course, many other factors come into play in world-record-breaking performances, such as the athlete’s training, nutrition and recovery, as well as their mental preparation, the weather on race day and the effectiveness of their pacers (which were controlled to a significant degree with INEOS 1:59, but which are not controllable to nearly the same degree in the real world of marathon racing, though Kosgei was fortunate to have two excellent pacers who took her through at least 35K). Another factor (cited in the RW story by Kastor’s former coach, Terrence Mahon) is that it requires not just a superior athlete with strong credentials at shorter distances, but someone with the ability to run consistently fast splits (as Kipchoge, and now Kosgei, have demonstrated in spades), which is a different skill set from running a tactical race and conserving energy for as long as possible before unleashing a kick. Kosgei ran the first 5K in 15:28, which, if she’d been able to maintain it, would have gotten her across the finish line in 2:10 and change (and which had the pundits predicting she’d blow up).

RELATED: When will we see a new women’s marathon world record?

The spectre of doping

You don’t hear much speculation that Kipchoge might be doping. It seems inconceivable, somehow, even though discussions of his massively engineered shoes now use the term ‘shoe doping.’ But many reports about Kosgei’s achievement mentioned that she is managed by Federico Rosa, who has represented convicted dopers like Boston and Chicago marathon champion Rita Jeptoo, 2016 marathon winner Jemima Sumgong and three-time 1,500m world champion and Olympic gold medallist Asbel Kiprop.

On the blog:
I asked industry pros @jgault13, @dbinsaintpaul and @d9monti their opinions on the current IAAF Road Racing rules.

When the doping issue came up during the post-race press conference, Kosgei said she does not train at the same facility as the Rosa athletes who are currently serving bans, and (with limited English) implied that breaking records requires hard work and is possible without doping.

Radcliffe herself survived a maelstrom of doping rumours in 2015, around the time of the first allegations about Nike Oregon Project head coach Alberto Salazar (who received a four-year ban for doping violations on September 30). She was cleared, and emerged with her reputation intact, but not without being criticized for maintaining a troubling silence (on the advice of the IAAF and WADA) until she was officially exonerated–and her comments on the Salazar case made her look both defensive and evasive on the subject. It’s clear that in 2019, athletes (with the possible exception of Kipchoge, who seems immune to all of this) must be seen to be fully engaged in the cause of anti-doping.

And though we don’t know how long Kosgei’s record will stand, it seems unlikely it will last anywhere near as long as Radcliffe’s. Kosgei herself says she is focused on getting faster, and that she thinks it’s possible for a woman to run 2:10. “I think 2:10 is possible for a lady,” she said at the post-race press conference. “I am focused on reducing my time again.”

It’s fair to say the world will be very interested to see what Kosgei can do next.