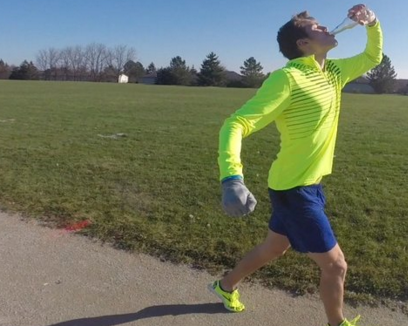 Lewis Kent won the beer mile world championships yesterday and broke the world record yet again proving that not only is he a talented athlete but he is also fantastic. Several are stoked.

Kent, student at the University of Western Ontario and hella fast person, is so wicked at running laps of the track while pausing intermittently to put beer into his body that many have been asking the question: “Is Lewis Kent is the best EVER?”

And our answer is, yeah… probably.

Kent is so good at the beer mile, we could take all our news stories on him breaking the beer mile record and make them into a sizable pamphlet– bigger than most others. In fact, when he broke the record again yesterday, we were a little stumped on how we could write another story on him without sounding repetitive. We briefly considered delivering the news via acrostic poem.

So there are a few runners that are right up there with him. Many might be tempted to toss a few big names in the running scene (both Canadian and international) out there claiming that they are better– Melissa Bishop, Andre De Grasse, Dennis Kimetto, and all the Kenyans to name a few examples. But when you think about it, when comparing all these athletes’ performances in athletics, Kent comes out on top.

Dennis Kimetto is pretty good. As holder of the world marathon record, his marathon pace is brisk. More brisk than everyone else’s actually. That’s hard to argue against. Lewis Kent has broken the beer mile world record more times than Kimetto has broken the marathon record though. When you look at it from that angle, Kimetto just doesn’t really do it for us.

Now take Melissa Bishop. She currently holds the Canadian women’s 800m record and despite struggling with serious injury this year, she bounced back winning silver at the world championships and gold at the Pan Am Games. She didn’t think she’d be competing at all. Bishop has a wow factor for sure, but she could up the zazz.

As could Andre De Grasse. When he pulled his stellar sprint double at the NCAAs this year winning the 100m and 200m, many called the double the best in history and we were like “wow.”

More points for De Grasse: he won bronze in the 100m at the world championships winning Canada the first medal at the event since 1999; he represented Canada at the Pan Ams winning two golds; he holds the Canadian record in the 200m; Bruny Surin also called him the new face of Canadian track.

But that’s kind of it. I guess what we’re saying is, Andre De Grasse? Bit of a one-trick pony.

To pick apart the Kenyans is kind of a no-no in running. When it comes to running, Kenyans win stuff. That’s what they do. They win most of the things. Out of the past 10 Boston Marathon champions, six are from Kenya and of the 10 fastest marathon times, eight belong to Kenyans. Notable performances indeed. A sub-2:04 is good, but to be brutally honest, does the jaw really drop?

How about now: Of the 10 fastest performances in the beer mile, eight of them belong to Canadians and those Canadians were tipsy when they made it to the finish. In fact, Canadians invented the beer mile. Kenyans did not invent running.

It’s not that these other performances in athletics aren’t cool, it’s just that when stepping onto the track, Kent brings the sparkle AND the shine. He’s had eight impressive beer miles in 2015, four of the top ten beer mile times are his and he keeps breaking that record. Kent can swallow a beer before most people can even open one.

Sure, others can run faster than him but by adding another element to the sport (that being tossing beer drinking into the mix) he has buried all his competition. Runners touched on this when they came up with competing in the triathlon but they’ve been kicking themselves ever since because now, they have to train for three sports instead of one.

Kent on the other hand blended the two best things– partying and running– and is the best at it. Kent is the best.

So that’s that. Case rested.