Regardless of where you live in Canada, winter running can be tough. From the cool, rainy days in Vancouver, to the thick snow and slush in Toronto to the damp, icy cold winds in Halifax, lacing up your shoes this time of year takes a lot of motivation and preparation. Runners in more northern areas understand this better than anyone, including Mario Villeneuve, a resident of a small town in Northern Ontario, who gave us his tips for dealing with the cold, snowy and icy conditions winter brings. 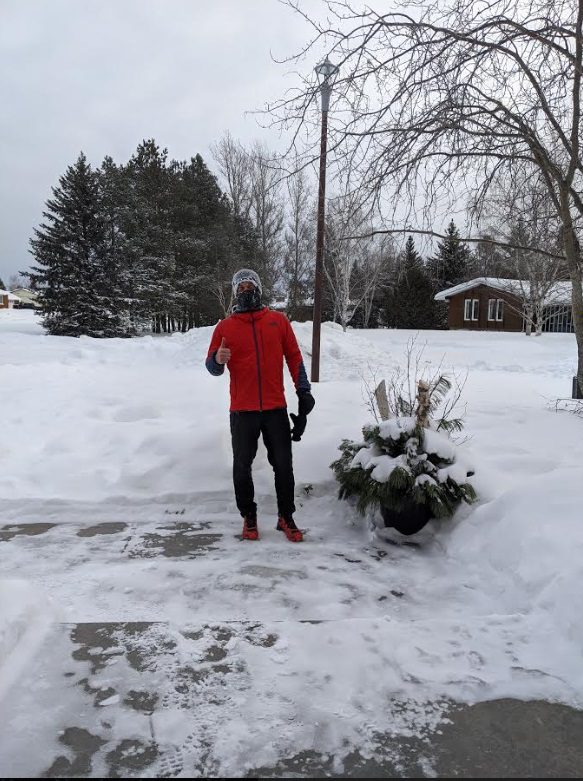 Villeneuve lives in the town of Hearst, a predominantly French Canadian community of about 6,000 people in the district of Cochrane, Ont. Located on the Mattawishkwia river, the town is about 260 kilometres northwest of Timmins, 540 kilometres north of Sudbury and 870 kilometres north of the Muskokas. The 41-year-old father and business owner is a passionate runner and cyclist, and is (not surprisingly) well-accustomed to winter running. Perhaps also not surprisingly, there are not many other locals joining him on his runs aside from his longtime friend Frederick (who Villeneuve says is the only one crazy and dedicated enough to join him).

“Running is less popular due to limited running routes,” he explains. “You have to be creative. The northern sports are mainly based on using anything with an engine, like ATV, snowmobile, fishing and hunting.”

When it comes to winter running, those of us living in more southern parts of the country could learn a thing or two from Villeneuve, who offered his best tips for surviving a winter run in Northern Ontario. (Spoiler alert: many of them revolve around clothing.)

RELATED: 5 winter running hacks to dress better for the weather

First, Villeneuve recommends wearing studded shoes to help you gain some traction in slippery conditions. He also suggests using a headlamp, since the sun goes down particularly early when you’re farther north. A face covering is a must, and don’t even think about wearing gloves — mittens are the only way to keep your fingers warm in the freezing temperatures, he says. Of course, layering is key, and Villeneuve says that when you’re getting dressed for your run you have to consider the wind, not the temperature, in order to know how many layers you need.

“Winter running in Hearst is not a fashion show,” he says. “Wear whatever works for you. I usually have six to 10 different brand names on me.”

Finally, he recommends that if you live in a cold area and you’re thinking of starting a running routine, your best bet is to start in November to give your body a chance to adapt to the cold. He adds that you should not expect to run as fast thanks to the lack of traction you have with each step, coupled with wearing multiple layers and a face covering that may obstruct some of your breathing.

To some, running in a place like Hearst may not sound like much fun, but Villeneuve says he loves to “challenge the weather.”

“I wouldn’t live anywhere else,” he says. “I love the northern French culture and our lifestyle. We are lucky crazy northerners.”

RELATED: 7 tips to get out the door this winter