It has been a difficult year. Instead of major marathons, Olympic trials and the Olympics themselves, we got race cancellations, lockdowns and quarantines. Despite this, our Canadian athletes still managed to set PBs, break records and prove their world-class calibre. In a year marred by tragedy, let’s look back at the top Canadian moments in Canadian running in 2020.

Led by Montreal’s Stephanie Simpson, team Canada competed virtually against 21 different countries on their own course in Kelowna, B.C. Simpson completed 43 hours of running, which put her 21st overall. Alberta runner Matt Shepard was the second Canadian, running for 42 hours, followed by Chelsey Topping, who ran 40 hours. Despite bad weather and lots of rain in Kelowna, Team Canada still managed a podium finish. For the full results, click here.

The Canadian 10k Championships have historically taken place over the Ottawa Race Weekend, but of course in 2020 this was not possible. Instead of cancelling the race altogether, the event was moved to a virtual format, where elite runners had a 12-hour window on July 1 to complete a 10K course of their choosing (with some stipulations).

Our Canadian elites proved that it’s possible to run a killer time without the crowds, and Natasha Wodak took the win on the women’s side in 32:41, a mere 10 seconds behind her winning time from 2019. Justin Kent was the men’s winner in 28:52, followed closely behind fellow B.C. runner Luc Bruchet, who ran 29:17.

On Sunday, September 20, John Harrison Pockler ran the 890-kilometre Bruce Trail in a record time of nine days and 17 hours, beating Adam Burnett’s previous record by four hours. Thanks to trail re-routings, closures and construction, Pockler’s Garmin tracker actually showed that he ran 944 km, making his record that much more impressive. Each day he was on the trail for about 17 hours, running a daily average of 94K.

Rory Linkletter started 2020 off in a big way, finishing his first half-marathon in 1:01:44, only 16 seconds off the Canadian record. This came only a few months after his impressive 2:16 marathon debut at the Scotiabank Toronto Waterfront Marathon.

The runner from St. Thomas, Ont., was the first official finisher of Laz Lake’s Great Virtual Race Across Tennessee. She completed the 1,000K distance in 11 days and 20 hours, finishing ahead of nearly 20,000 other participants. For those of you doing the math, that means she covered an average of 85K per day for two weeks straight. (Later in the year, Biloski joined Team Canada at Big’s Backyard Ultra World Championships, which finished third after Belgium and the U.S.) 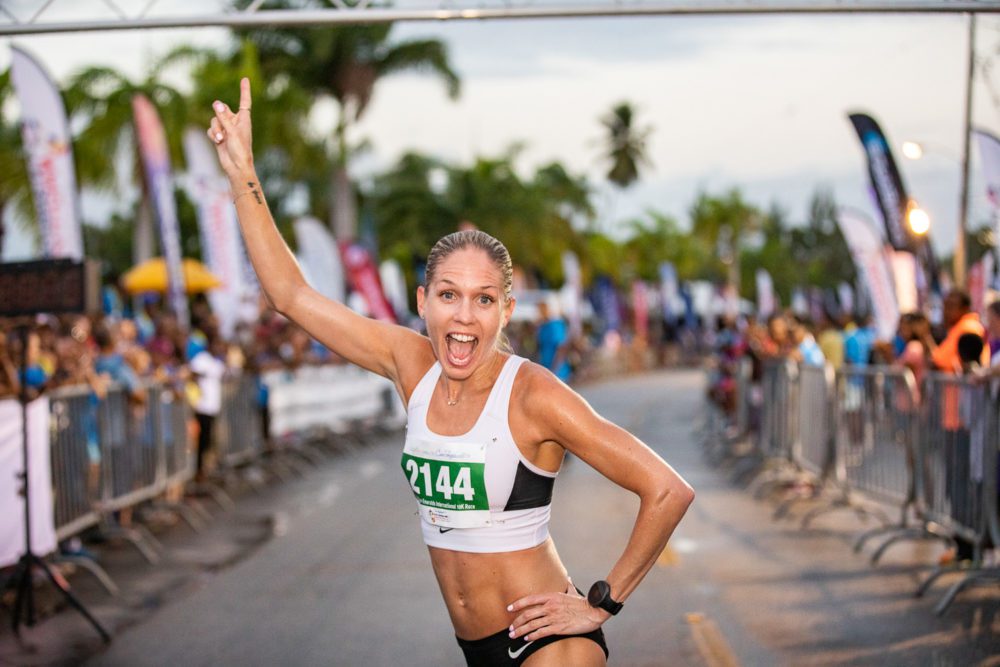 On January 18, Natasha Wodak became the first Canadian woman to run a sub-1:10 half-marathon, with a time of 1:09:41. This came only one month after Rachel Cliff broke her own Canadian half-marathon record of 1:10:06.

The half-marathon mania didn’t stop there. A mere three weeks after Wodak broke Cliff’s record, Andrea Seccafien ran a blazing 1:09:38, becoming the second Canadian woman to run under 70 minutes and beating Wodak’s time by three seconds. This was the third time in only seven weeks that the Canadian record was taken down.

The runner from Cobden, Ont., ran the race in 2:10:51, a two-minute personal best and 40 seconds under the Olympic standard of 2:11:30. The elite-only event had runners complete 2.1K laps around London’s St. James Park. They had to run the loop 19.6 times to complete the entire distance. Woodfine’s result is even more impressive when considering the terrible weather conditions, the course and the lack of spectators.

In another impressive debut performance, Ben Preisner ran an incredible 2:10:17 at the Marathon Project in Chandler, Ariz. He was the first Canadian across the line, finishing in eighth place, and his time was well under the Olympic standard of 2:11:30. This puts him in an excellent position to be named to the Tokyo 2021 Olympic team.

RELATED: 5 takeaways from the Marathon Project

Wodak continued her incredible year by setting a nine-minute personal best at The Marathon Project. Her time of 2:26:19 is now the second-fastest time in Canadian history, and it is far faster than the Olympic standard of 2:29:30. Her last marathon was in 2013, but this new time puts her in a very strong position to be selected to the Tokyo 2021 team.

The 40-year-old finished the Houston Marathon on January 18 in third place in a time of 2:24:50. In only her second marathon ever, her result smashed the previous Canadian record of 2:26:56, set by Rachel Cliff in 2019. This pretty much guarantees her a spot on the Tokyo 2021 Olympic team.

In perhaps one of the most exciting races of the year, Canada’s Mohammed Ahmed beat his own 5,000 metre Canadian record on July 10 at the Bowerman Track Club Intra-Squad Meet. His time of 12:47.20 not only holds his spot at the top of the Canadian all-time list, but it’s also a North American record that puts him 10th all-time in the world. This incredible result has generated a lot of excitement leading to the Tokyo Olympics in 2021.