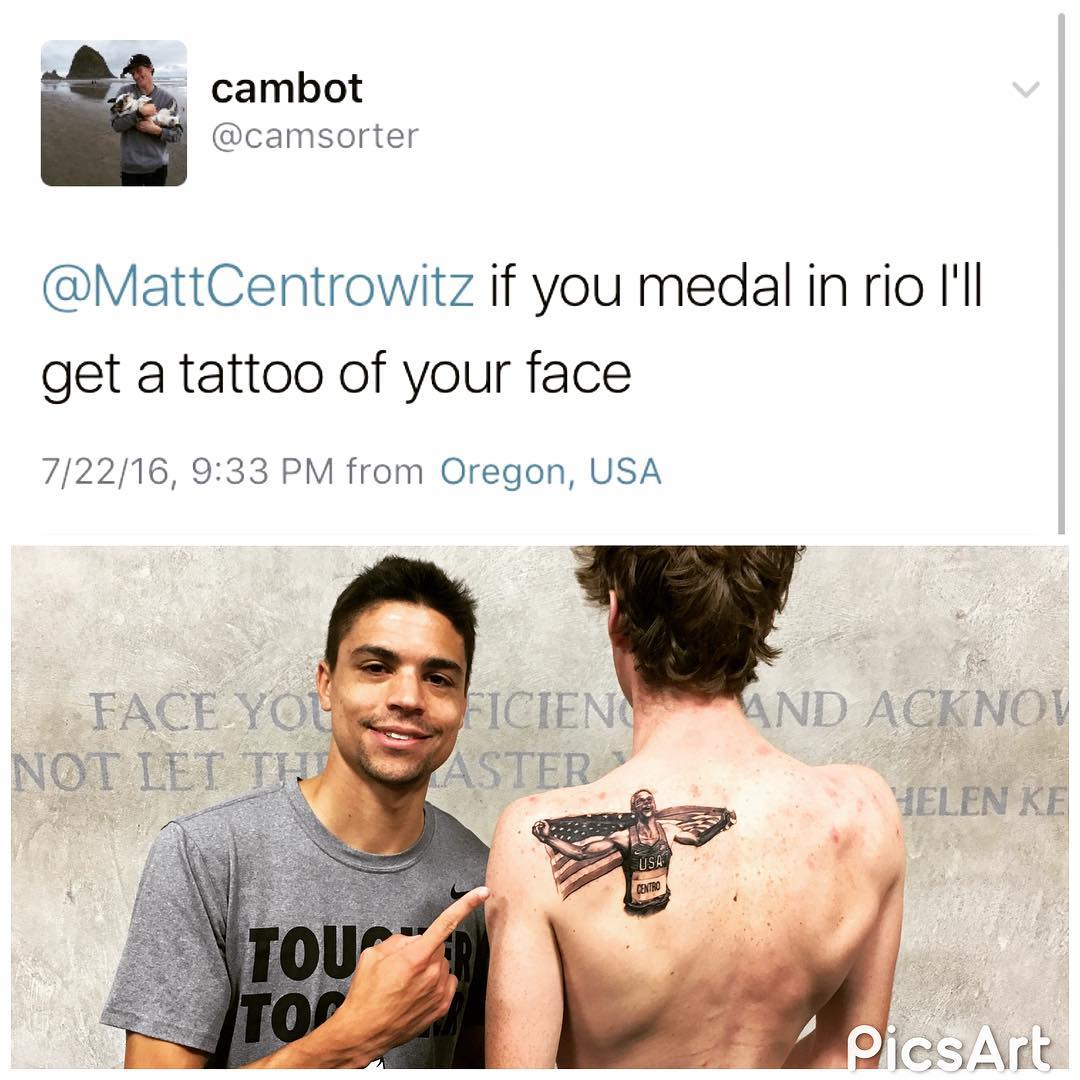 A lot of Americans were rooting for Matt Centrowitz during the men’s 1,500m final as he became the first U.S. athlete to win the Olympic event since 1908. One young man may have been on the fence on whether or not to cheer him on for the a podium finish as he had something significant on the line if he did. The young runner had promised Centrowitz to get a tattoo of his face if he delivered with a gold medal performance.

“If you medal in Rio I’ll get a tattoo of your face,” the college runner tweeted out prior to the Rio Olympics.

Centrowitz then went on to win the men’s 1,500m in 3:50.00 upsetting the likes of Asbel Kiprop and the defending Olympic champion Taoufik Makhloufi. The 27-year-old trains with the Nike Oregon Project, the same group as Canadian Cam Levins.

Centrowitz had a banner year in 2016 winning the 1,500m at the IAAF World Indoor Championships in Portland, Ore. in the winter before winning gold in Rio. The Beltsville, Md. native is known for his fast finishing kick at the end of track races. In Rio, he closed in a 50.6-second final 400m.

Cameron Sorter of Nebraska’s York College delivered on his promise. On his shoulder blade, he now has a tattoo of Centrowitz holding an American flag after his Rio performance. Spikes Magazine, an IAAF publication, was the first to post about the event on Monday. The tweet has since received considerable attention being shared more than 180 times with an additional 730-plus likes.

So this actually happened!!! ? pic.twitter.com/KCaOaP8Oo7

The two runners even hung out for an afternoon recently getting in some core work together. Below is the photo that now appears on Sorter’s back though the bib is changed slightly to reflect Centrowitz’s nickname: “Centro.”

“You are a man of your word,” Centrowitz wrote on his Instagram account. “I gave Cameron an out after the Olympics but he insisted on getting the tattoo. Met up for a run this morning, FaceTimed Parker Stinson (one of his favourite runners), and got a little core work in. All in all, a solid Monday to start the week. Thanks for the support and love man. Best of luck to you at York College.”

“Man today was a good day,” Sorter tweeted out on Monday.