It’s part of the folklore of the Longboat Roadrunners that it got its start sometime after the 1980 Ottawa Marathon, when a few members of the University of Toronto Track Club, miffed that the club wouldn’t spring for beer for the journey home, decided to secede. When it came to choosing a name, a number of possibilities were floated, but as if to prove they were about more than just the post-race refreshments, they chose to honour the legacy of running legend Tom Longboat. And they have been doing so through their commitment to Toronto’s running scene and its history ever since.

The idea to name the club for Tom Longboat came from another legendary Canadian runner, the Olympian, multiple Commonwealth Games medallist and Longboat scholar Bruce Kidd, an associate professor at the University of Toronto. Like Longboat, the club’s members are passionate about running, and middle- to long-distance road racing in particular. In contrast to Longboat’s experience, who endured prejudice and racism throughout his life despite capturing every Canadian record from the mile to the marathon, the club that bears his name attracts a diverse membership, and maintains warm relationships with Longboat’s descendants and the Six Nations reserve in Brantford, Ont., where he was raised.

The Longboat Roadrunners have earned an enviable reputation in the greater Toronto running community as host to two annual races–the 6K Sunset Shuffle and the Toronto Island Run 5K and 10K, all of which take place on the scenic Toronto Islands.

Past president and the Island Run’s current race director, Rob Hanks, remarked on how much goodwill there is in the Toronto running community towards the races, both of which sold out this year solely through word-of-mouth and social media. He gives most of the credit for this to former race director, Lynn Bourque, who held the “job” for about eight years and is now the proprietor of The Runners Shop, a longtime sponsor of the race (along with Quartet and New Balance). 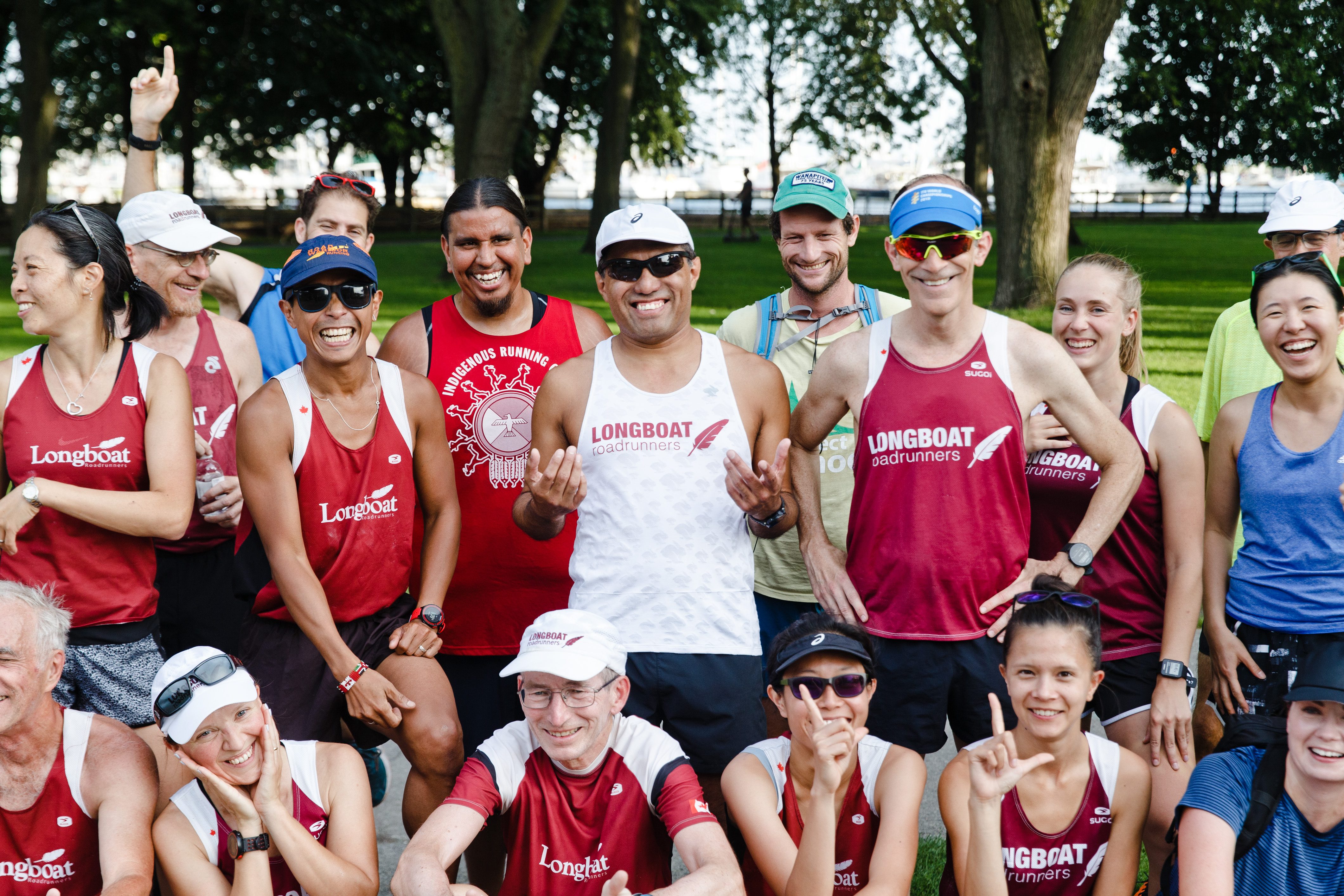 “Lynn played a huge role in building up the club and the Island Run,” says Hanks. “It was she who introduced chip timing to the Island Run, which was a key step toward modernizing the race. Lynn also added the Kids’ Mile as a chip-timed race, which perfectly suited our focus on family participation. ” The Island Run is Toronto’s oldest continuously-run 10K, and though flooding on the island has caused some headaches and reduced its numbers, it has never been cancelled, and this year it sold out strictly via word-of-mouth and social media, with approximately 1,500 runners showing up for all distances.

Many Toronto runners know and love actor “Too Tall Tony” Fletcher, who can be seen and heard on the mic at the start and finish lines of many Toronto races. What they might not know is that he joined Longboat in its first year, and he has missed only five out of 39 Island Runs, appearing at the club races on a volunteer basis. “Tony also plays a key role as a volunteer organizer behind the scenes,” says Hanks. “He’s been a constant fixture with the Island Run since he joined the club 39 years ago.”

Runners of all levels are welcome at Longboat, which offers several weekly runs out of the west-end YMCA and University Settlement House, but in particular, those interested in marathon training will find a wealth of experience and coaching, both formal (at a nominal extra fee) and informal.

Roberto Zendejas, 51, is currently training for his 14th marathon, and will race the Scotiabank Toronto Waterfront Marathon for the sixth time this fall. His personal best is 3:09, and he hopes to get somewhere close to that on October 20.

Zendejas came to Toronto from Mexico in 2007 with his (then) wife and three daughters, and discovered Longboat through a friend. “Longboat members really have a passion and a love for running,” he says. “Just by running with them and sharing our goals and experiences, I improved… There is this love and passion for running, and you can feel those vibes when you are running. Longboat members are very kind and friendly and enjoy sharing their experience.”

In addition to the races, the club offers a variety of social events throughout the year, including a brunch to welcome new members and an awards banquet.