You can’t do it all–unless you’re Ailsa MacDonald. The 38-year-old Alberta based endurance athlete is a trail runner, ultrarunner, road runner, and triathlete. She excels at each sport all while balancing a full time job in an oil field in Northern Alberta. Born in Sterling, UK, raised in Bridgewater, N.S., and currently residing in St Albert, Alta., MacDonald currently holds six course records and two overall wins at the ultrarunning distance. In 2017 she claimed the 50K and 100 mile Canadian National Champion title. In 2018 she won Ironman Canada. And she began her 2019 racing season winning overall and setting another course record at the Pemberton 50K in Arizona in February. We chatted with MacDonald and learned the secrets to her years of success. 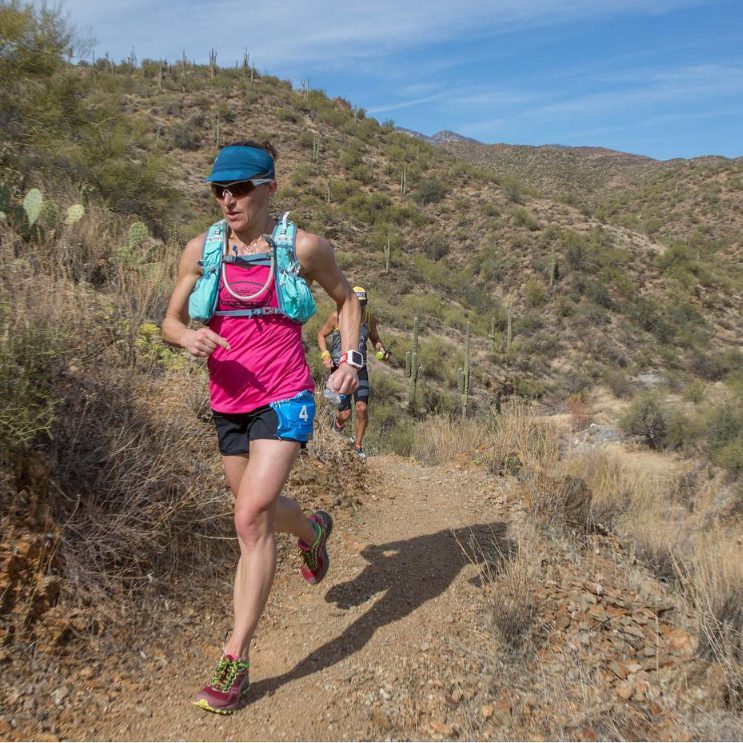 MacDonald and her husband Barry  both work 10 days on, 10 days off in Northern Alberta. Last year they began spending their time off in Arizona during the winter months. MacDonald says that is key for getting in big training days during the winter. “It really helps being in Arizona where the weather is favourable for outdoor training and I can get in lots of trail running!”

MacDonald always does a run training focus in the winter. “When I spent my winters in Canada, I would always do a big run focus in the winter for several reasons. You can run in almost any weather and when it’s too crappy to run outside, I would move my training indoors and focus on speed. Running in winter conditions builds a lot of character and can prepare you for anything. I found running on icy/snow covered trails is great agility training. Even though my pace was much much slower, my stabilizer muscles, which are often neglected, are fully engaged working to keep me upright. I believe the Canadian winter running conditions made me a stronger, better runner both mentally and physically. And even though I now spend my winters in Phoenix, I still love to focus on running during these months. On the one day a month I do spend at my home in St Albert, I try to get outside for a run.  There is something refreshing about the cold Canadian winter air that I truly love.”

When MacDonald set the course record at the Pemberton 50K in February, she ran alone for the final half. She was in the lead and tapped in to her competitive nature and kept going. “One of the things I enjoy most about trail running is the solitude. I also knew the course record was well within my reach so I dropped the hammer and picked up the pace. I had an excellent second half and ended up running the second loop two minutes faster than the first, crossing the finish line in 3:41. A course record by six minutes, only the second female to run under four hours on the course, and the first female to ever win the race outright. It was a very unexpected result.”

MacDonald credits much of her success to her off season. She thinks she races “well in the winter is because I am coming off a long break. I always take some down time in the fall. The reason I choose the fall for my off season is because I find the change of seasons very difficult. The short days and cold months really suck the life out of me. Plus I race a lot from January to September so I’m usually burnt out and well overdue for a break come fall. So October and November are pretty lazy months for me. I’m still active, but racing is far from my thoughts during these months. I take this time to let my body fully recover from months of abuse.  I don’t follow any sort of training regime, I eat too much, drink too much, and sleep a lot. By the time late November roles around, I’m rejuvenated and ready to go again. I have basically followed this regime for the past 10 years. My race season usually starts back up in January.”

MacDonald doesn’t feel guilty for taking time off in the fall. “I think this is something that most athletes don’t allow themselves to do. We feel guilty for taking a back seat for a while thinking we’ll lose fitness, but it’s important to take some down time. The off season will vary from athlete to athlete.  We all have different times of year where we struggle with motivation. I know a lot of athletes that couldn’t imagine having their best race season in the winter. A lot of athletes focus on summer races. But that’s what works for me.  And what I’ve learned in all my years of racing is we are all unique and when it comes to racing, training and fuelling,  you have to find what works for you and not get too caught up on what anyone else is doing.”

For MacDonald, winter is for running, and summer is for cycling. This contributes to her success in a variety of events. “Summer months are better for cycling so I have always worked on my run speed over the winter months and left the summer months open for cycling.  That left me going into the tri season with a solid run base.  I always pick a winter marathon to keep me motivated and focused.  This year my marathon is Boston and the Rock ‘n’ Roll Half was a prep race.”

MacDonald’s 2019 race season is well underway. She has already set a course record and won a 50K overall. Next up is the Boston Marathon, followed by Ironman Santa Rosa in May, Quebec Mega Trail 100K Canadian National Championships in June, and CCC at UTMB in August.