When Anne-Marie Madden did a training run for the Way Too Cool 50K (WTC) in January, the trails were runnable, fast, and dry. WTC is a classic and competitive 50K trail race in California known for being fast when the conditions co-operate (male course record 3:04:48 and female course record 3:41:56). The March 2, 2019 edition of WTC looked more like World’s Toughest Mudder, with waist-deep streams and thigh-high puddles. Regardless, the legendary Madden swam her way to third against some of the world’s top trail runners.

RELATED: From trails to trials. How Anne-Marie Madden “qualified” for the US Olympic Marathon Trials 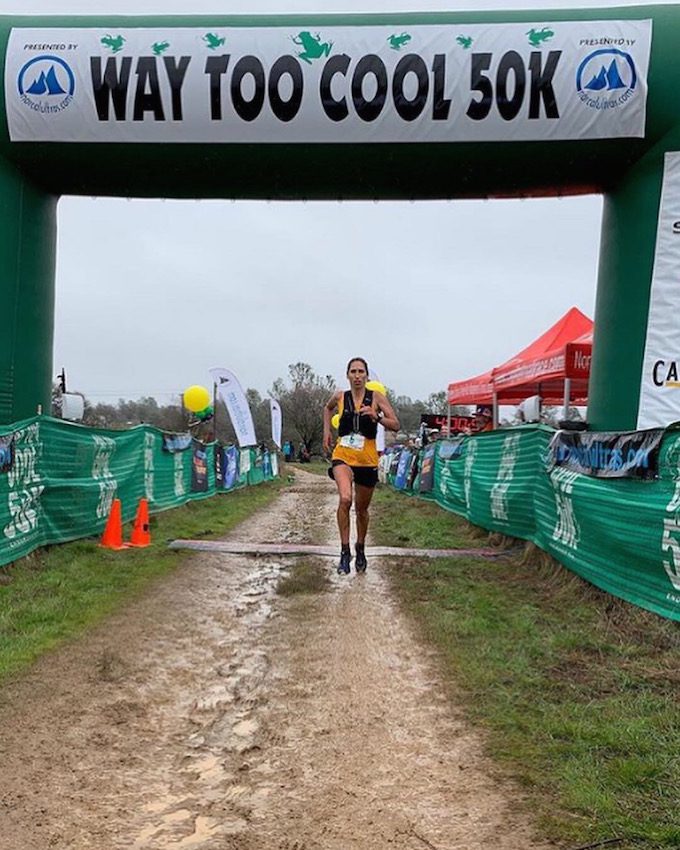 The Vancouver runner is completing a Cardiothoracic Anesthesiology Fellowship at Stanford Hospital, and was unsure whether she would be able to fit in training or races at all. Toeing the line at WTC felt like a privilege. “My approach was to run in the middle of the trail, regardless of whether it was a huge mud puddle or not (rather than circumnavigate it). This worked fine most of the time, but occasionally I’d get surprised by how deep the puddle was, and find myself wading through thigh-high chocolate milk.”

Madden’s approach to training, racing, and life is both strategic and fun. However, the positive athlete found herself struggling through negative thoughts during the first half of the race. Her plan was to run slow and steady while pacing herself in the bizarre conditions. Madden stuck (literally and figuratively) to the plan, running much of the race in sixth place.

At the 30K mark, she started passing more women, eventually moving into third. She climbed her way up Goat Hill as a volunteer chanted on a loudspeaker in the pouring rain, “Here comes Miss America!” Madden felt like she was in a beauty pageant. Although Canadian, she thought he deserved an “award for most enthusiastic volunteer.”

The hilarious heckler boosted Madden’s spirits. She finished third behind American runners Clare Gallagher and Addie Bracy. The women’s podium shows just how competitive and tough the WTC 50K is. Although her time was a bit slower than anticipated, Madden felt “grateful that her slow and steady pacing paid off on a day when my running wasn’t feeling especially smooth.”