“Where’s Garth?” Blair Shunk sat in the restaurant in Jasper with his team mates. They had made the six-hour drive from Calgary to Jasper and were sitting down to a much-needed dinner the night before the Jasper-Banff relay. The drive feels like a long one despite the gorgeous scenery that appears out the window as they near their Rocky Mountain destination. It should have been a relief to have arrived but they were one runner short. Garth Huck was the quiet one of the group back then. Hours earlier and right before departure, Huck told Shunk to wait just two minutes, he’d be right back with his gym bag, he said. “I forgot him,” says Shunk. The runner was still in Calgary and Shunk didn’t miss him until now. “He found a ride up and ran the race,” says Shunk. “He forgave us and we became friends after that.”

That was back when the original Jasper relay was still running. The history of this Rocky Mountain race dates back to 1979 when a team of runners first got together to run the course from Jasper to Banff. In 1980, the race officially kicked off. It went until 2000 attracting teams from around the world – 120 of them could show up to battle it out. The relay claims to be one of the most beautiful in the world and the directors have the stunning western Canadian mountain landscape to back that up. 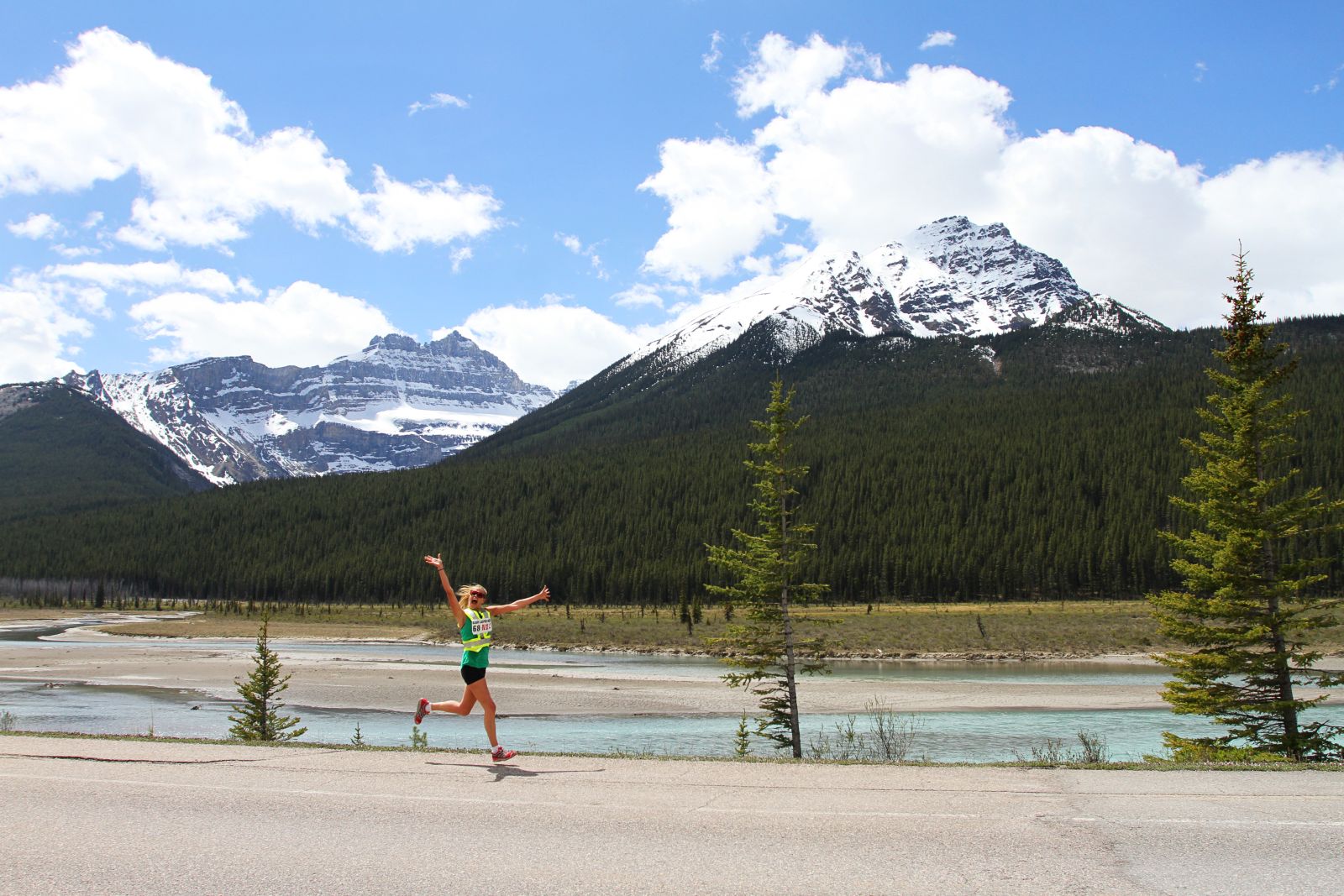 RELATED: On the run in Banff
RELATED: Beers for after the trail

But when runners take on this distance, dark sets in while they are still running and having hundreds of runners roaming through the dark in grizzly bear country was enough to give Parks Canada an anxiety attack. When the new millennium rolled around, they shut it down. “Parks Canada said ‘There’s grizzly bear activity at night, we don’t want you running at night anymore,'” says Shunk. So that was that.

It’s one of the most beautiful drives in the world that you’re running on.

While the race’s history was unfolding, Shunk’s relay team was developing their own story about the annual run in Banff-Jasper territory. Every year, the group members marked it on their calendar, packed the van and headed away from Calgary’s flat lands into the mountains. Since the “Where’s Garth” incident, that team ran the relay several times. Needless to say, it was a major disappointment when it shut down in 2000 and they wanted to bring it back. During these years, Huck got diagnosed with a brain tumour. It caused his death in 2004. Just before, Shunk says he promised him that the team would bring the Jasper relay back. He said they’d do it for his sake. In 2005, the second generation of the relay was born. Shunk became the director. This time, runners go from Banff to Jasper instead of the other way around.

“It was pretty straightforward because we’d run the course so many times,” says Shunk about the early years of directing. Since then, not much has changed. “We’ve stuck with the same format and rules,” he says. Here’s how it works: It covers 260-kilometres divvied up into 15 legs for members of the 60 teams. Like many races, it has a charity. Their chosen cause: The Brain Tumour Foundation of Canada. For one day in early June, runners gather to run their section on the shoulder of either the Bow Valley or Icefield Parkway. To conquer the darkness issue, they have two phases which run simultaneously– one runs from Banff to the South Saskatchewan River Crossing and the other takes runners on a route from there to Jasper. Because they run at the same time, runners finish while it’s still bright. Why is so great? “It’s in the Rocky Mountains,” says Shunk. “It’s one of the most beautiful drives in the world that you’re running on.” 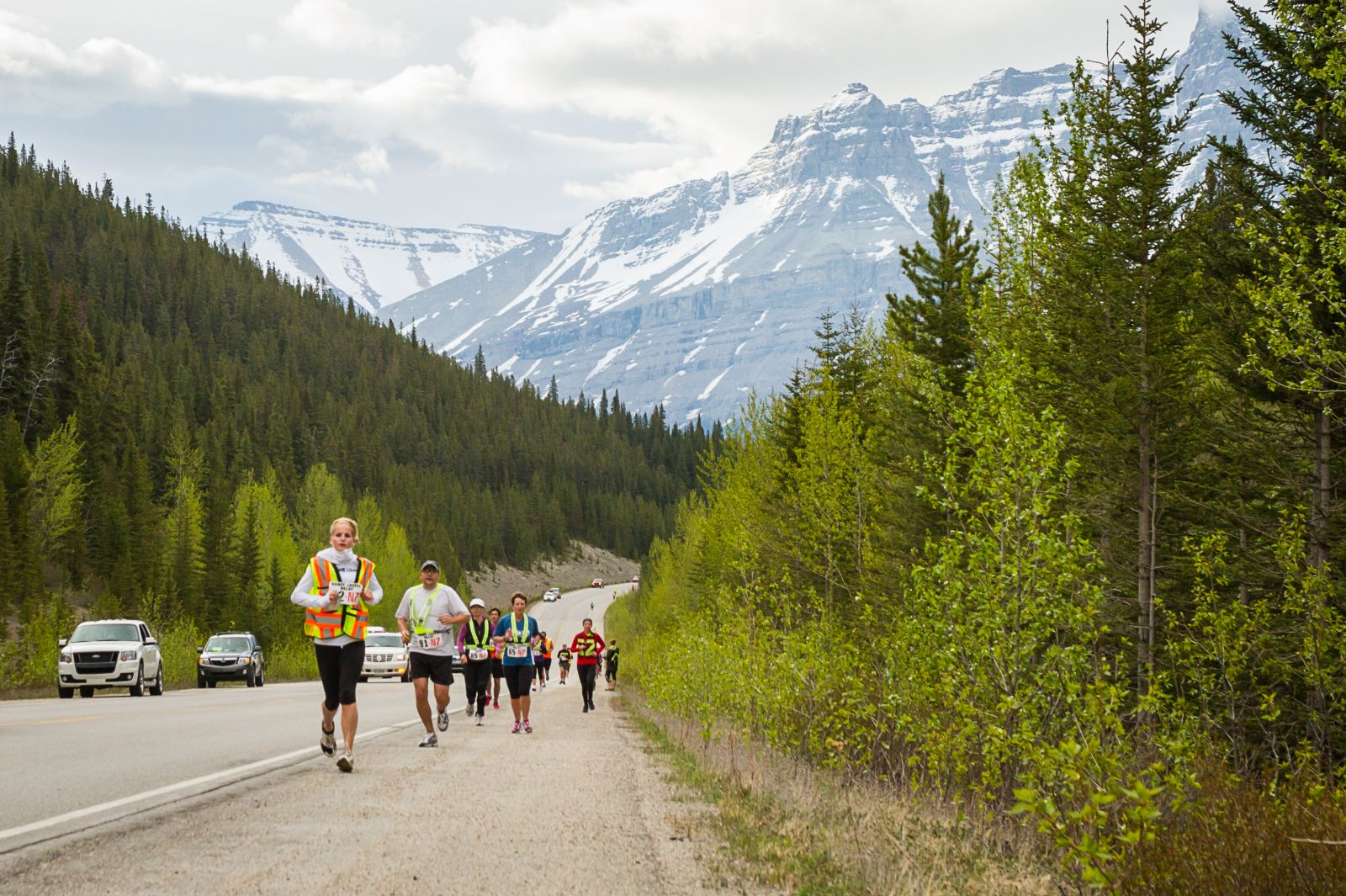 There’s nothing like early June in the Rocky Mountains.

During Leg 13 of the 2014 relay, Murray Meads makes a turn on the Mount Kerkeslin road and starts the downhill cruise towards the Athabasca Valley. The Edmonton runner is running the Banff-Jasper relay for the third time. He says the relay is by far his favourite Canadian running event. It has been a silent run so far other than the sounds of the Athabasca below him. Now, looking north towards Jasper, Meads drinks in views of red and purple-tinted mountains. These Rocky Mountain views are a luxury for any runner. He eyes them until he spots the solo woman ahead. Many of the runners have spread out by this point and so a few kilometres into his portion of the race, it looks more like Meads is on the shoulder of the mountain highway for a long solo run.

He’s running competitively today so he picks up the pace and closes in the distance between himself and the woman. A third into his section of the relay, he passes her and continues down to the river valley with trees on either side of him, mountain on his left and Mount Edith Cavell up ahead. He plugs on until he sees vehicles parked up ahead. His stretch is over and then next runer will begin, turning the corner to where a cluster of mountain goats have gathered for to get their fix of minerals that comes from licking the rocks. “Most people like to come back,” says Meads. It’s no wonder.

“There’s nothing like early June in the Rocky Mountains,” he says. For one, it’s right before tourist season and clusters of people have not yet scared away the wildlife. “Early summer there is time for the renewal of life. Early in the morning, air is crisp. Driving down the highway, everything is so pure.” 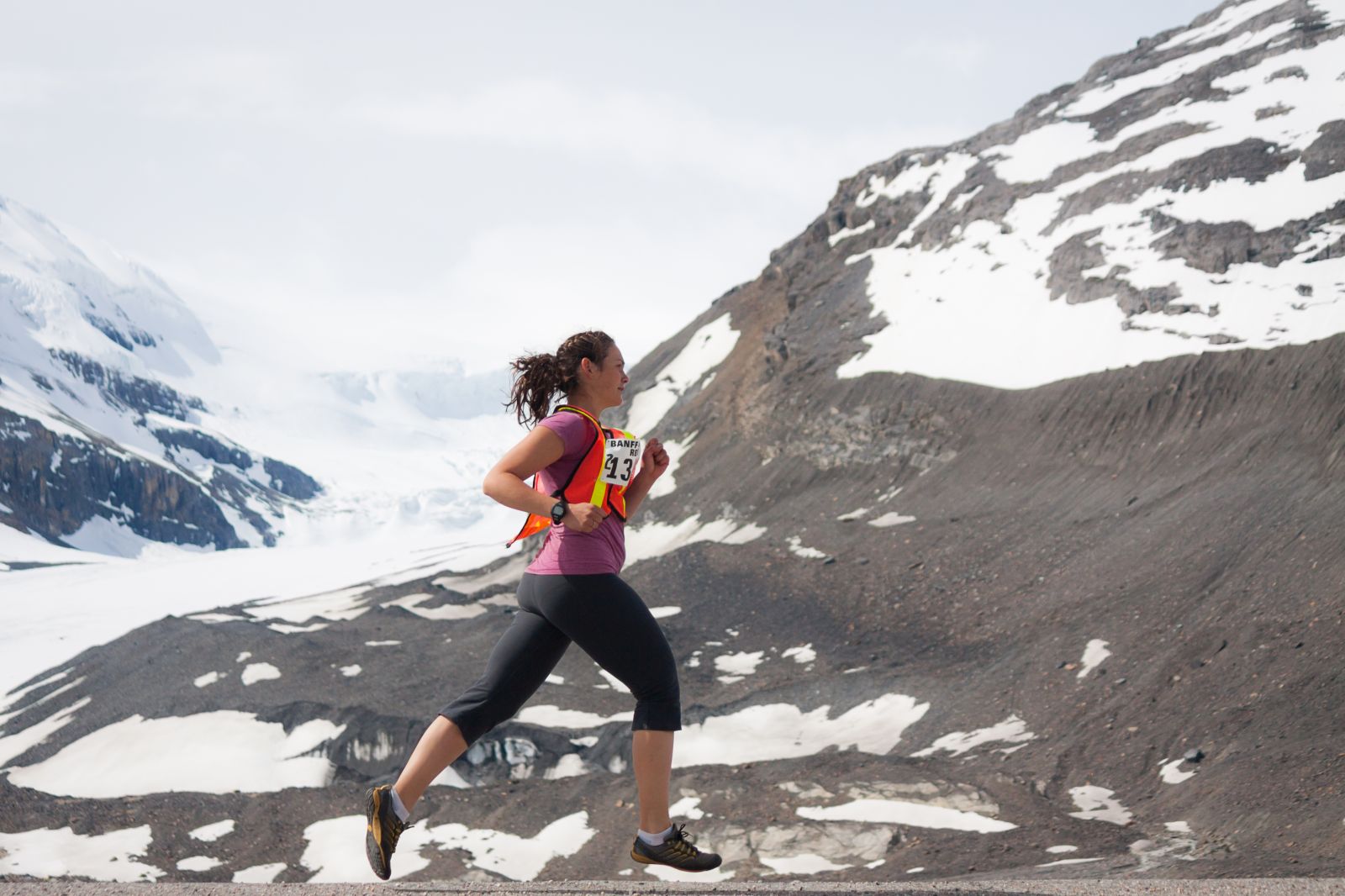 But as anyone who has spent time in this part of Canada will know, sunny blue skies aren’t something you can count on. Especially when runners hit the Icefields. Signing up for this race, you better be able to tough out brutal weather. “The first year we didn’t know what to expect,” says Meads. “One of those things was how the weather can change.”

The runner on the ninth leg of the relay was enjoying a sunny and bright run. In June he was unsurprisingly dressed in summer gear. The same can’t be said for the next runner though. “As we waited we saw a big storm come in off the Icefields,” says Meads. Suddenly there was snow. The next runner dressed with full-length shirts and pants as if going for a run in winter. By Leg 12, those on the course were back to experiencing summer weather.

“The Icefields makes its own weather,” Shunk notes. The miles that cover the Icefields take runners on big paths and elevation changes. It’s mountain weather. You could start the section in shorts, but as Shunk explains, some are known to finish with hair frozen in clumps at the side of their face.

There could be snow at the side of the road but it’s 30 degrees out. It’s such a uniquely Canadian experience. 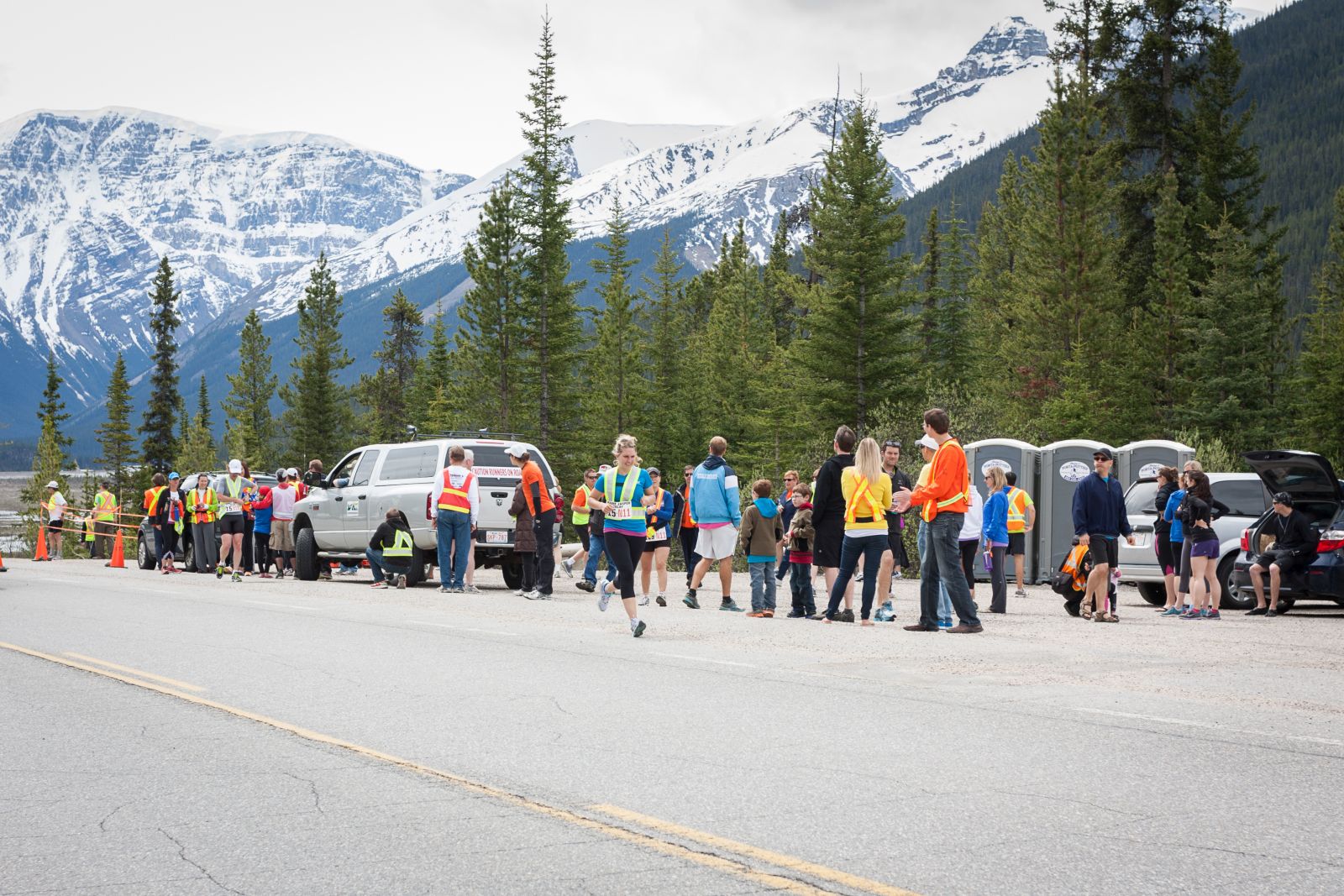 After so many years of involvement, Shunk explains why he loves it so much. Part of it is the bond built with the team of guys. There’s also the relationship with the course itself. “You’re running along a mountain river. It’s almost periwinkle blue,” he says “There could be snow at the side of the road but it’s 30 degrees out. It’s such a uniquely Canadian experience.”

He describes the relay as a weekend of binge running. “Once I ran it in the 80’s, that’s all I wanted to do,” he says. The members of his old team feel the same. It’s been many years since the crew sat in the Jasper restaurant discussing the whereabouts of Garth Huck and 10 of the original 15 still routinely make the journey into the mountains each June. “Where’s Garth?” has become an inside joke among them. Back then no one noticed Huck’s absence when Shunk took the van out of park and put his foot on the gas leaving the quiet runner stranded in Calgary.

Little did they know how one day, his story would shape the identity of the iconic Canadian weekend. 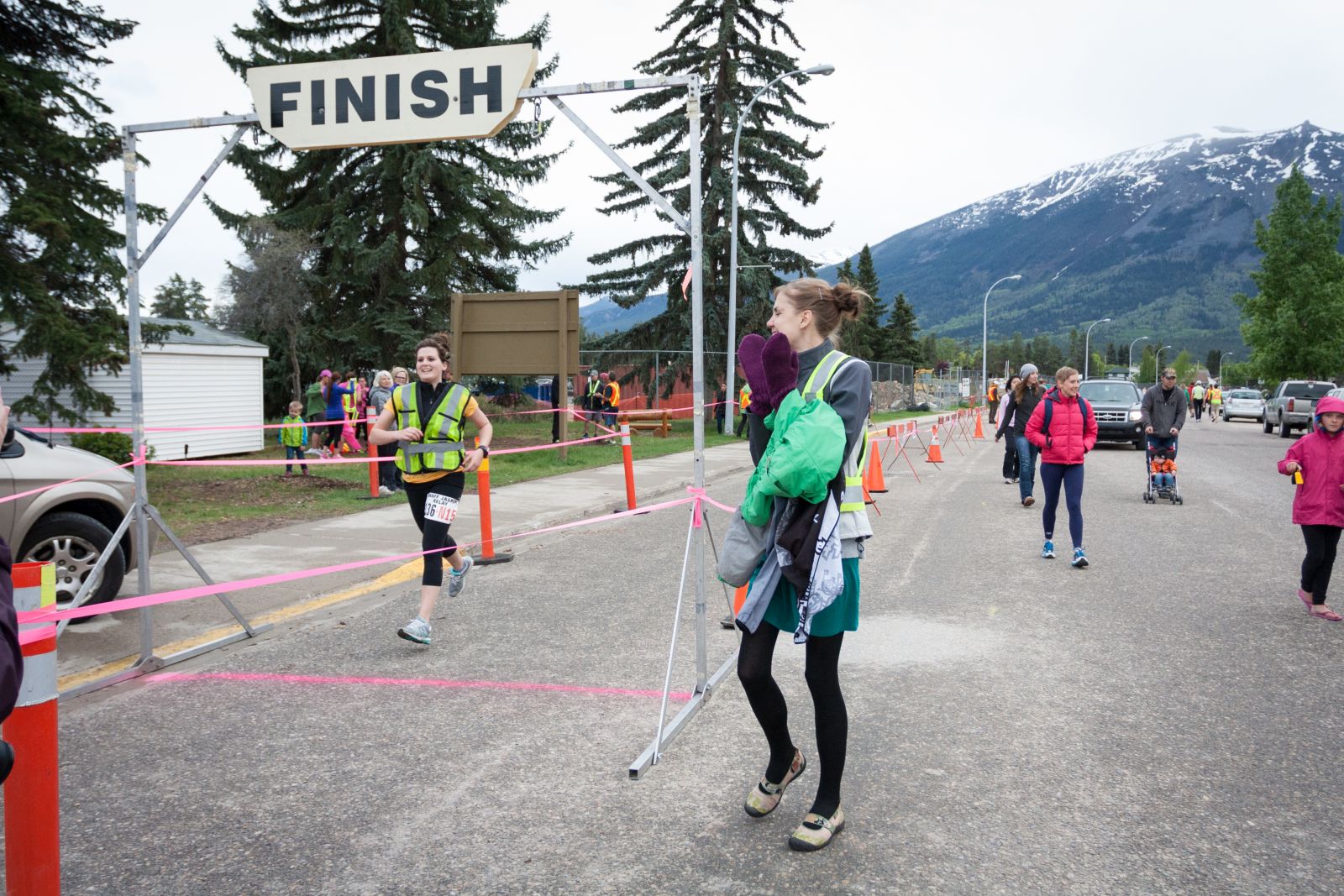