Fall is just around the corner so now is the perfect time to plan a trail running adventure. From coast to coast, Canada is a stunning country during the fall, and while there are thousands of trails to choose from, take a look at some of our top picks for soaking up the beautiful fall colours while stretching your legs in the great outdoors. 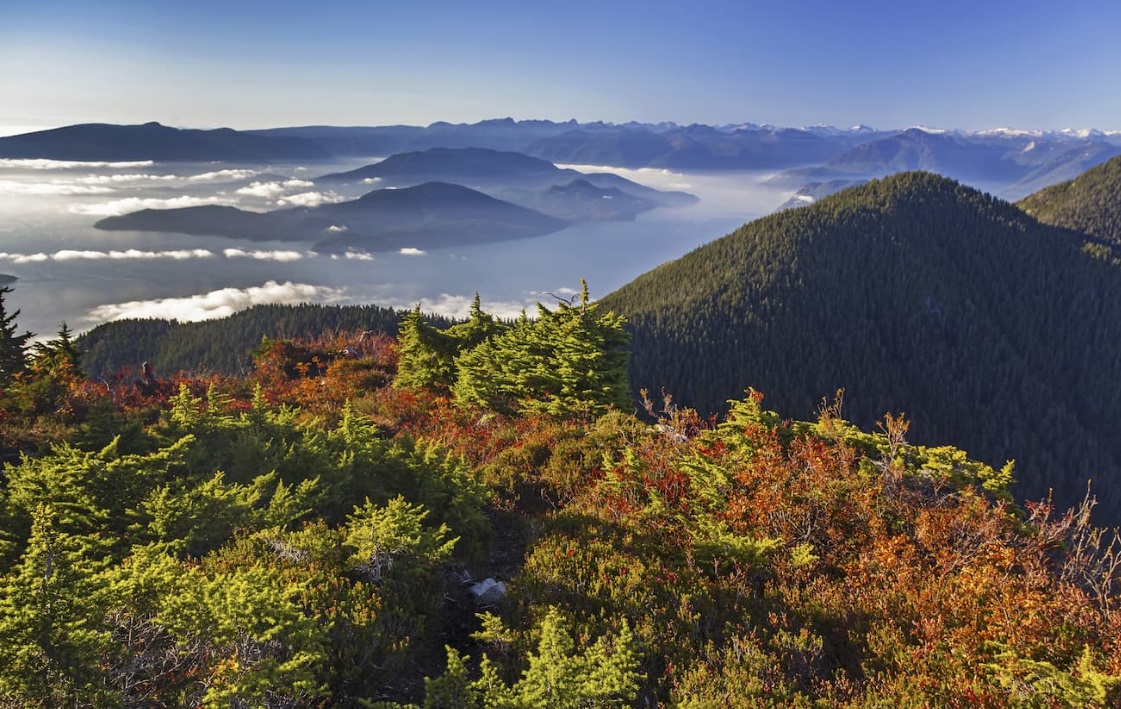 This is a more technical trail with some steep scrambles and muddy sections, so you won’t be going fast, but you’ll be rewarded with some beautiful views. At just 10.5 kilometres, this run can be done in only a couple of hours and offers everything you could want in a fall trail run — gorgeous fall foliage sights, mountain views and challenging terrain. It’s also only about 45 minutes outside Vancouver, so it’s a lovely day getaway for city runners.

Sentinel Pass near Lake Louise is beautiful at any time of year, but the best time to go is during the last few weeks of September, when the larch trees begin to turn from green to bright yellow. This 11.6 km out-and-back trail features lakes, mountains and of course, trees, and will leave a smile on your face the entire way. Fair warning: this is a popular spot, so arrive early if you want a spot to park.

The Wascana Trails are just 30 minutes north of Regina, and offer runners 15 kilometres of fall adventures in the Qu’Appelle Valley. The trails are maintained year-round, making them a great place to go for trail runners of all levels.

RELATED: What type of trail runner are you? (According to science)

This 12.6 km trail takes runners north to Indian Bay and returns along the east shore of West Hawk Lake. It does include a few steep, challenging climbs, but those who attempt it are rewarded with some spectacular views of the lake. There are some rocky areas that can get quite slippery, so make sure you’re wearing good trail shoes to provide you with a bit more traction so you’ll stay on your feet.

Lions Head Provincial Park lies on the shores of Georgian Bay about 3.5 hours north of Toronto. At over 12,000 acres, it offers a variety of trails ranging from 5 km to over 15 km, with spectacular viewpoints to take in the fall colours next to the sparkling waters of the Bay. The trails here have become very popular over the years, so keep that in mind and if you can, plan for a mid-week visit to avoid the crowds.

This massive park in Gaspé, Que., is about an eight-hour drive from Quebec city, but it’s worth the trip. With over 10 options for trails of varying lengths and difficulties, there’s something here for all levels of trail runners. Try the Du Banc trail for a short, 4 km jaunt, or go a little longer on the Les Graves trail, which has an 8 km and a 15 km option. For the more experienced trail runner, the park offers two long trails, Les Crêtes and Les Lacs, which are 35 km and 36 km, respectively.

RELATED: Things trail runners don’t have to deal with

Situated in New Brunswick’s Appalachian Mountain region, Sugarloaf Provincial Park contains more than 25 kilometres of trails. Each trail ranges from three to eight kilometres, and can be combined to create a longer route for those who want more time to soak in the beautiful scenery.

The Cabot trail is known as one of Canada’s most scenic drives, partly because it loops through Cape Breton Highlands National Park. The 9.7-kilometre Skyline Loop trail is one of the most popular, but the Franey trail and the Acadian trail are other great options for beginner and intermediate trail runners. For those who’d like to go a little longer, the Fishing Cove trail is just over 17 km and offers gorgeous oceanside views.

This beautiful trail runs along abandoned railway tracks and runs from one end of P.E.I. to the other. It has a gentle gradient and smooth surface of rolled stone dust, which makes it accessible to trail runners of all levels, and at over 400 kilometres long, you can choose to run whatever distance you like.

There are over 100 kilometres of trails in Gros Morne National Park. The length of each trail ranges from as short as 250m to 17K, with plenty of options in between. The Lookout Hills trail and Berry Head trail are particularly spectacular if fall colours are what you’re after.

The Yukon boasts some of Canada’s most untouched nature, which makes for some stunning trail running. Known for its popular 5-day Backcountry Hike that ends at Talus Lake, there are also shorter options in the park for those who’d prefer a single-day adventure. Not only will you get incredible views everywhere you go in the park, you may also get the chance to see some of Canada’s wildlife.

Many people go to the park to view Cameron Falls, but trail runners should go for the Plant Lake Loop trail. This 27 kilometre journey takes you around Plant Lake and through the entire park, so you won’t miss a single view.