Damian Hall and Beth Pascall have finished their quest to beat the existing 230-mile (368K) Cape Wrath Trail FKT of 7:09:31 (seven days, nine hours, 31 minutes) in northern Scotland, and they slayed it. The run, which was tracked live by Summit Fever Media (the company that produced Underdog, the story of Hall’s unlikely but successful quest to finish in the top 10 at UTMB), ended earlier today in 4:09:43, with Hall and Pascal knocking three days off the existing record set earlier this year by Przemek Szapar of Poland.

Widely regarded as the toughest trail in Britain, the Cape Wrath Trail extends from Fort William (near Ben Nevis, the highest peak in Britain) to Cape Wrath, the northwesternmost point in mainland Britain, a distance of 368 kilometres, with 12,000 metres of ascent. Hikers usually do it in about three weeks.

The route is not marked, and in many parts is very remote and wild, with a lot of dangerous river crossings and no roads within several hours’ hiking. Cellphone service is intermittent, and the sun peeks above the horizon for approximately six hours out of 24. Hall and Pascall decided to ratchet up the challenge level by doing the run in December. 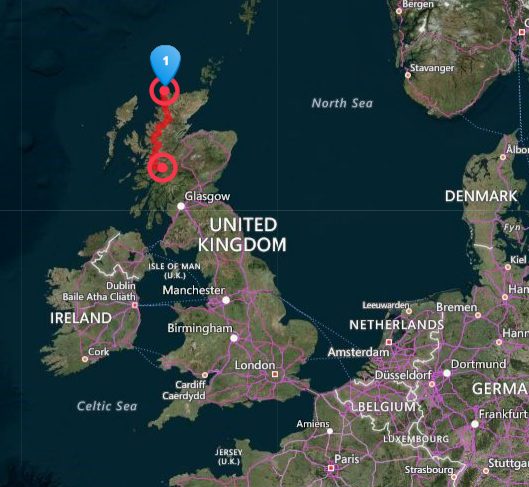 Pascall was the fourth woman (and first British woman) to finish at UTMB this year and a veteran of many international trail ultras. She is also a physician. Hall and Pascall delayed their FKT attempt by a day due to excessive rain, which had made river levels rise along the route. Just for fun, they ran up Ben Nevis on their “self-imposed rest day.”

The roof of the UK today! @Ultra_Damo & @BethPascall delayed the start of their 230-mile Cape Wrath Trail record attempt by 24hrs to allow high-level river crossings to recede.

Instead they ran to the top of the UK’s highest mountain!

Hall is sponsored by Inov-8, makers of the innovative graphene-soled trail shoes.