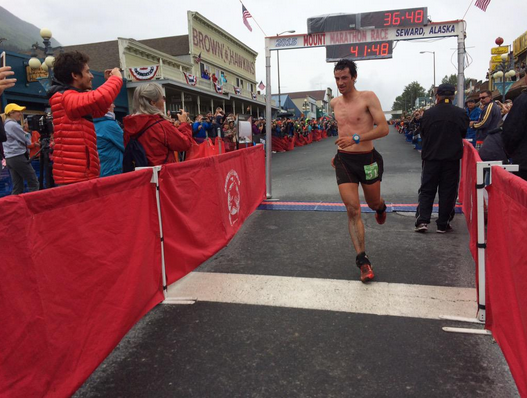 The iconic Alaskan Mount Marathon race was held yesterday. Kilian Jornet was the champion of the mountain race known for its treacherous terrain and difficult climbs. To add the the excitement, records fell in both the men’s and women’s races yesterday.

In the men’s race, the top three runners stayed together for much of the race reaching the summit at 31:29. That’s an ascent record on the course. Jornet managed to break away making it to the finish with a time of 41:48. That breaks the previous record of 42:55 which was set by Eric Strabel. In second place was Rickey Gates running a 42:56. Behind him was Jim Shine clocking a 43:11.

I wish it was one year from now. #MountMarathon race rocks!!

Alaskan runners typically perform amazingly well at the Mount Marathon race. This year, the top two runners were not from Alaska. Shine however is from Anchorage as is Strabel. Strabel did compete again this year placing fourth with a time of 43:26.

Emelie Forsberg from Sweden has earned her bragging rights on the course after yesterday’s jaw-dropping performance. Forsberg placed first breaking a record that has been untouched since 1990. The record had been 50:30 which was set by Nancy Pease. Yesterday, Forsberg smashed it by a long shot running 47:48. When she arrived at the finish, she had quite the lead. The next runner, Allison Ostrander ran 50:28. Christy Marvin came in behind her at 52:59. Both second and third place women are from Alaska.

As for the junior race, girls and boys ran together. Luke Jager came in first running a 27:39. Riana Boonstra was the first junior girl. She ran 32:38. The junior race does not cover the full 5K distance on the mountain.

The Mount Marathon race is one of the oldest in the U.S. The first one ran in 1915 however it has not run every single year since its kick off. It’s a rough course, so much so that organizers require runners to attend a safety meeting the day before. New runners are strongly discouraged from signing up as they will have to navigate steep uphills along loose rock and shale. On their site, organizers even suggest coming equipped in safety gear like padding, goggles or helmets.

Fans on the sidelines as the #MountMarathon action continues. The women’s race is about to start! #MtMarathon #KTVA pic.twitter.com/4YTCHrkpP6

Runners should have been out on the course before race day (not alone) to prepare and should have experience in mountain running already. The safety meeting is not intended to be a replacement for experience. Though it’s just 5K, the hazards of running it should not be dismissed. The gain on the ascent is nearly 3,000 feet and runners have to turn around and make the descent after reaching the summit. Just a few years ago, one runners suffered severe injuries on an accident on the course. Another went missing and was never found.