In pursuit of the leader, Alaskan veteran David Norris, he was going all-out down a section of the course marked on the race map as “very steep, loose rock over hard bedrock, DANGER!,” passing snow patches left over from winter. He charged down a dozen more tough sections below at high speed, and crossed the finish line uninjured, coming in second, with a time in the top-10 of the race’s 100-year history and improving on his place and time from 2015. It was just Elson’s kind of race – the type of event where you’re lucky just to get through it without being injured. 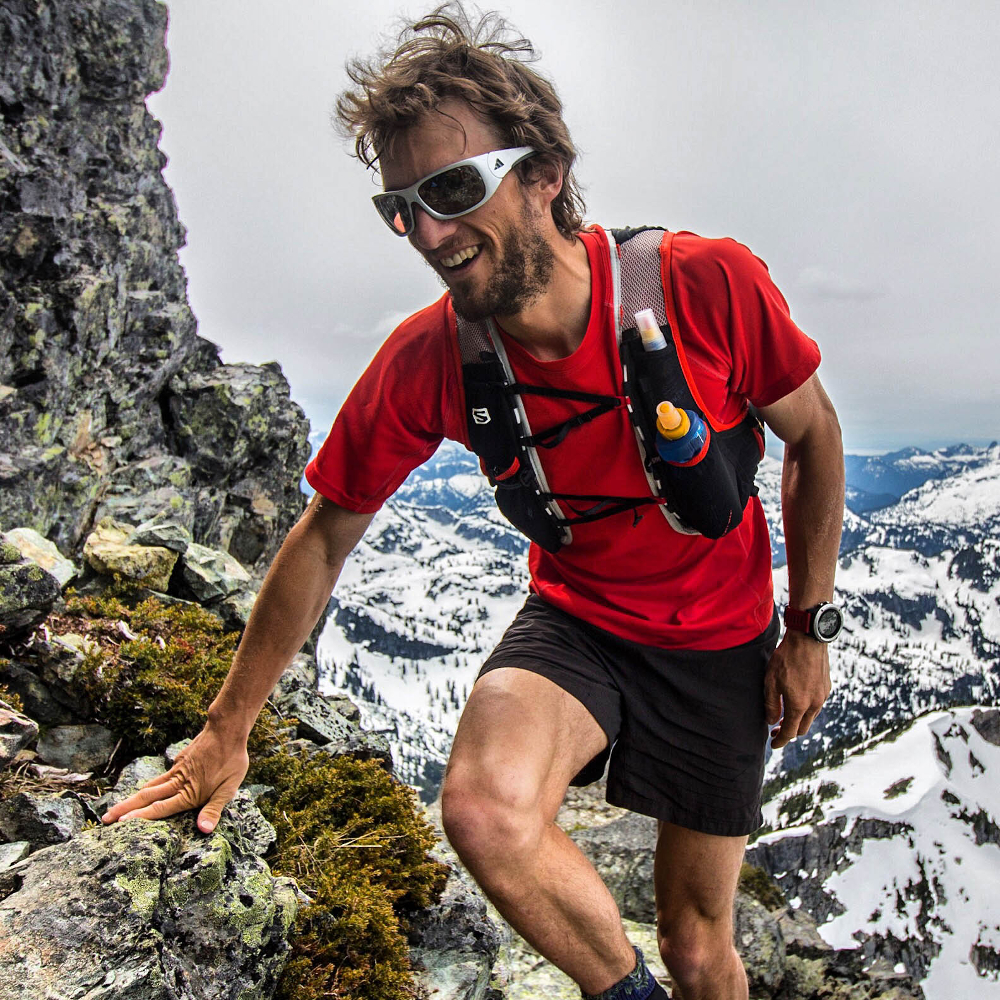 Elson came to his love of dangerous and intense running through climbing. In 2012, he joined top American alpinist Colin Haley on the Cassin Ridge, 2,400 metres of steep rock and ice climbing that leads to the summit of Denali, 6,190 m. Elson was well prepared. His climbing record included fearsome routes from the deserts of the American Southwest, the Coast Mountains of Canada and the Swiss Alps. The idea was to climb the Cassin Ridge so fast that they did not even bring a rope. Elson was no stranger to epics: on a previous five-day trip up the Cassin Ridge, he and his partner’s only cooking pot had blown away and they had to boil water in their avalanche shovel.

They hadn’t gotten far up the route when Elson had an important realization. He didn’t want to climb it. “I was too slow, and I realized that my risk tolerance wasn’t high enough to climb hard and move that fast at high altitude.”

After that, Elson discovered ski mountaineering (a.k.a. skimo), an event where competitors ski up and down mountains using skins on the bottom of their skis for ascents. They boot pack up ridges (climbing in their ski boots) and train to move quickly and efficiently in an endurance-type event.

“Running started as training for skimo,” says Elson. “Then I realized I really enjoyed it.” Another skimo athlete who had taken to the trails, Eric Carter, became his partner in crime on many of his upcoming running adventures. But the trail running scene also drew Elson in. “The trail community is a pretty wholesome, friendly community. It’s less structured than road racing and less about PBs and that sort of thing. Everyone’s in the same boat.”

Elson didn’t start trail running to compete, but with all of the great races in the Sea to Sky corridor and inspiring local mentors like Adam Campbell and Gary Robbins, it was inevitable that he at least tried one. His first event was the 2012 Rubble Creek Classic, a 24.5K race from Cheakamus to Rubble Creek with 1,340 metres of vertical climbing. It was a fast course with buff trails and meadows and flats. He came in second after Edward McCarthy, who set a course record that year at 1:50:51. A few years later, Elson broke McCarthy’s record, running 1:47:27.

That July, he travelled to The Rut in Montana to compete in the world skyrunning finals on Mont-Blanc. It was an education in high-level competition. Kilian Jornet won. He also ran Zegama, in the Basque country, in 2019. “It was an absolutely crazy atmosphere,” he recalls, “with the crowds yelling at you the whole time.”

Asked whether he has any plans to move up to stage races, Elson says he prefers races that are technical and over in a day. He especially loves events that have a special character or atmosphere. Alaska’s Mount Marathon event is one of his favourites. “It’s a grassroots race with a great community,” he says, “and it’s unique in the sense that it’s a race to the top of a mountain and back down on any route you want. It’s like the trail running Superbowl of Alaska, and it’s always held on July 4. Seward has a population of around 3,000 that swells to 20,000 on race weekend. There are about 800 or 900 competitors. People line the course, and it’s broadcast live. Because you choose your own route, it’s quite an adventurous race.”

In the race’s 105-year history, however, there have been numerous injuries. In 2012, racer Michael LeMaitre disappeared on the course and was later presumed dead. “You couldn’t get away with that anywhere else,” says Elson. “There was all kinds of speculation about whether [LeMaitre] faked his death. It’s hard to disappear. It is weird!”

Elson has also taken his running to high places, occasionally blurring the line between climbing and running. He holds the FKT for the Grand Traverse in the Tetons, a rugged mountain range in Wyoming. The traverse is a 30 km adventure over a dozen peaks up to 4,199 metres high. (Previous record holders were legendary mountaineers Alex Lowe, and then Rolando Garibotti.) He has the FKT for running up and down Half Dome in Yosemite. His FKTs in British Columbia’s mountains include the 88 km Stein Valley traverse in 13.5 hours in the summer of 2019, and in 2020, the Golden Hinde on Vancouver Island in 10 hours.

Given his preference for technical terrain and alpine adventures, the ELS 2900 in Andorra is a natural favourite for Elson. Set in the micro-state of Andorra, the race’s only rule is to summit every peak over 2,900m in Andorra with a partner. In 2018, Elson and Dakota Jones set a new course record.

For now, Elson splits his time between Squamish, where his girlfriend, Karina (who also runs), lives, and his hometown of Campbell River, where he works for a small criminal defense law firm. “I got into criminal law partly to make a living, but I also wanted to do something interesting and rewarding and make the world better, helping people who are marginalized by poverty and mental illness. It’s not boring. It’s always interesting. Also, it’s socially useful. I’ve mostly done things I wanted to do and worked various jobs to support that. But running and climbing give you a way to deal with stress in life and in the courtroom. They’re both relatively intense, but in different ways.”

As for the future, Elson hasn’t raced in 2020 because of COVID restrictions. For now, he’s focusing on enjoying the mountains when he isn’t working. “It’s nice to do something rewarding and good,” he says, “but hard to balance with having adventures and fun.”