Starting in the tiny village of Saint-Honore, near Grenoble, Elson began the race on runnable climbs through farms and countryside. Elson wasn’t surprised how fast some of the men started off. At the first aid station around 6K, he was “just inside the top 15 and working pretty hard.”

“The course then enters the “sentier du diable” (roughly translates to “the devil’s trail”), which is just a bunch of switchbacks cut into a pretty steep open slope. I moved up a few spots in this section and I think I got to the ridge inside the top 10. Just below the ridge, the trail was covered in snow and so the organizers cut steps up the slope then cut through the cornice that was blocking access to the ridge. The first climb was about 1,300 metres over 10K, and generally pretty runnable. Some guys ran every step.”

The most technical section of the race had snow from the day before and limited visibility. Race organizers “had also installed netting below to protect people from falling to their deaths,” which Elson did not test during the race. “This was followed by a descent on a steep snow slope where I grabbed the ropes and did a high speed bum slide. The next climb was on soft snow where the steps the organizers had cut kept collapsing. I had my hands in the snow the whole time and by the top they were like blocks of wood. I was generally making up time throughout this section of the race.”

By the time Elson reached the highest point in the race, he had caught up with the leader and made his descent into first place. A number of male runners were right on his tail, fighting (while laughing) for position “while employing ‘European style’ descending techniques.” Elson felt great until the last climb, as his legs were trashed from the steep downhills. Over the last 5K, Elson could see runners ahead of him, but unable to close the gap. 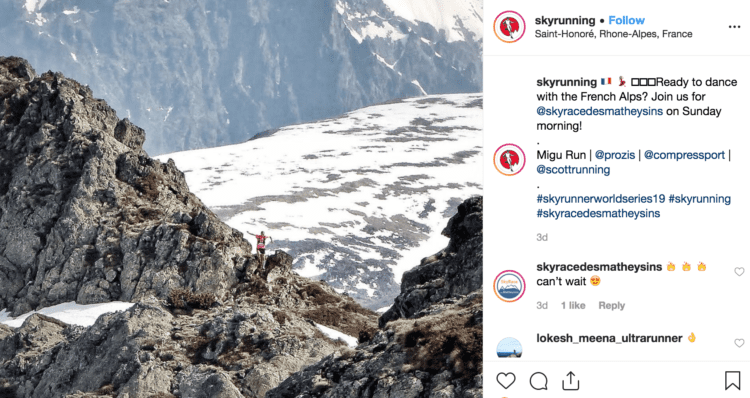 Over the last six weeks, Elson has been transitioning his legs from skiing to running, which he says is “always a bit tough. I was still pretty happy when I got to the finish and gave some high fives to the spectators.” As he crossed the finish line, Elson could hear the sprint finish right behind him for fifth place (Thibaut Garrivier tied for fifth a week after winning Transvulcania.) “The top 10 guys were all within five minutes, after two and a half hours of racing.”

The next Skyrunner World Series race is the June 1 Madiera Skyrace in Madiera, Portugal. Elson will not be racing, as he will be toeing the line with Kilian Jornet at Zegama-Aizkorri 42.195K race with 5,472 metres of elevation gain in Northern Spain. A week later on June 8, he will be racing 44K for Canada at Trail World Championships in Mirandha do Corbo, Portugal.