Everesting is the challenge of climbing 8,848m of elevation in one go, and it has become the official cycling trend of the lockdown. We’re only six months into 2020, and the number of Everesting attempts has already doubled last year’s. What has become the hottest thing on two wheels is making its way into running, and it turns out that if the hill is right, a runner can match a cyclist’s time at this particular feat. 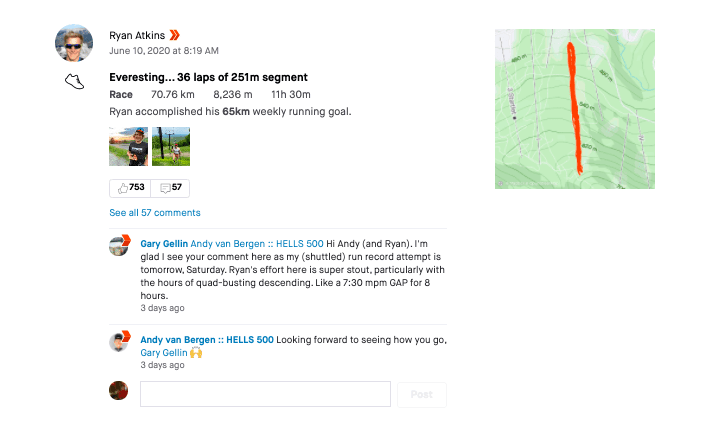 Canadian Ryan Atkins did the second-fastest running Everest attempt last week. The Caledon, Ont., native now lives in Sutton, Que., where he ran his challenge, and for three days was the world (running) record-holder. He was eclipsed on June 13 by Gary Gellin of Mill Valley, Calif., who completed the nearly 9,000m of elevation just eight minutes faster than Atkins did. However, Gellin ran up and cycled down while competing his attempt, so his Everest is considered assisted whereas Atkins’ isn’t.

Until last weekend, when two Canadian cyclists completed an Everest in 11:10 and 10:27, Atkins would’ve been the fastest Canadian over the distance, whether on two wheels or two feet. Here’s how runners are able to gain elevation almost as quickly as a cyclist.

It’s all about the hill

At a certain point, running up a hill is faster than cycling. Atkins’s hill was steep, with 251m of elevation gained over the 950m strip of trail (a 25 per cent gradient). The runner managed his impressive time by walking up and rocketing down (uphill he was around 11 minutes per kilometre and downhill he hit five minutes per kilometre).

It took Atkins a total of 69K to hit 8,848m, whereas it took the Canadian cyclists over 200K to do the same. While running is undeniably hard on the body, so is an extra 131 kilometres of work.

Atkins’s hill was only one mile from his house. He chose it because it was really steep going up, but still runnable going down. “I ran all of the descents, and after running downhill for 11 hours your legs are brutalized. I knew around 35 per cent was the fastest going up and going downhill at around 20 per cent was ideal. I split the difference at 26 per cent and found a descent with nice grass to be easier on my body.” The runner also chose a hill that was long, so he only did 36 laps, which were significantly fewer than the Canadian cyclists, who did 86.

As far as nutrition goes, Atkins says he drank a lot of maple syrup. “I was on my own for the first six hours and then my wife and friends showed up for the final five. I had a basket of water and food. Every lap I took some food. Other than maple syrup, I ate gummies and peanut butter and jam sandwiches. Toward the end I didn’t really want food any more and found that ginger ale was sitting better.”

Atkins will go for his first run since the Everest on Tuesday. He took one day totally off and has been cycling since. Up next for the runner will hopefully be an FKT attempt on Vermont’s Long Trail – the oldest long-distance trail in the U.S. “I’ve wanted to run on it for years. For now the borders are closed, but when they open, I will plan that attempt while we wait for racing to resume. I’m hoping to do the 437K in four and a half days.”