For many in the ultrarunning community, it is no surprise that Rich Morris, 45 toed the line of the Badger Mountain 100 mile race in Richland, WA dressed as a badger. On March 29, Morris ran 50 miles of the 100 mile course, bringing joy to fellow runners, volunteers, and supporters. The B.C. ultrarunner describes himself as having “the mindset of a 12-year-old” and focuses on fun at all costs. Morris had made a promise to race director Jason Reathaford saying he would “come this year in style.”

RELATED: why beer may be good for recovery

This was Morris’ first Badger Mountain 100 miler, but it was not his first rodeo. Morris has something of a reputation for wearing costumes for his 100-mile races, and will often “throw on the odd tutu.” The man has run nine 100 milers and one 200 miler, mostly in costume. He has finished Javelina Jundred (100-mile costumed trail run party) three times as a horse, a beaver, and a beer fairy. The beer fairy costume complemented Morris’ ritual of drinking a six-pack during his 100 mile races (12-pack for 200 milers).

Morris ordered the badger costume online and had it shipped to Washington in time for race day. “I hadn’t even tried to run in it. Had I tried, I would have made some modifications, which is what I do. It was a heavy-ish costume, and then it rained, which added an extra 10 pounds. The costume started sticking to my legs and messing with my biomechanics.”

Badger Mountain 100 miler was Morris’ first DNF, but it wasn’t due to chafing. He works for the Coast Guard, and completes most of his training spinning and doing stairs on the boat. “I didn’t get the pounding of the downhill, and my quads just blew up. I couldn’t even run the flats. I death marched 12 miles to the end of the 50-mile end point. There was no way I’d get back out for another 50 miles. I’ve never DNFd. I did the math and it wasn’t going to work.” 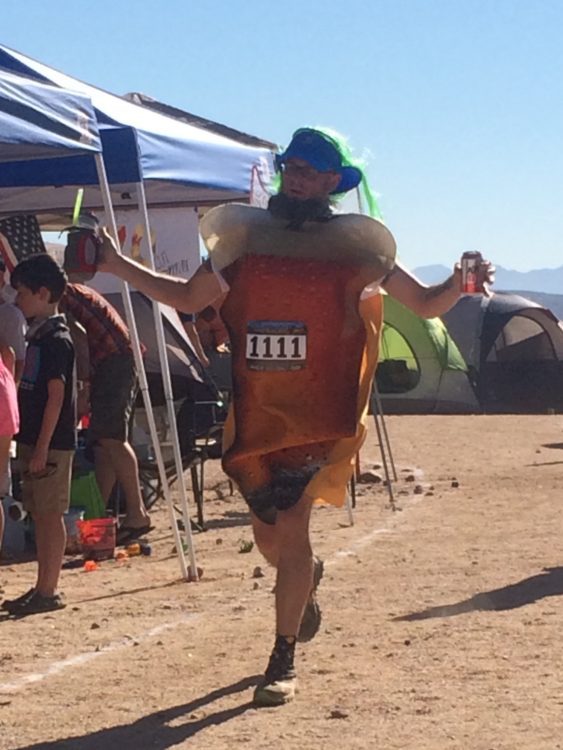 “Sometimes a DNF can be totally worth it. I got so many smiles, and people laughing that looked like they were miserable [in their race]. I’ll take that DNF any day. It was so good to see that many people smile. Since I started doing ultras, it was the best thing that ever happened to me. After I did my first 100 [Fat Dog 120], it changed my life. I remember looking and feeling so small and insignificant, but more alive than I’ve ever felt. And I cried. And I’m not an emotional guy. Such an amazing experience.”

When Morris isn’t racing, he is volunteering. He likes to dress up as the Grim Reaper for his volunteer sweeping duties. “I love double entendres,” he says. When we asked him if he had run The Bear 100, he logically responded, “No, but I’d like to run it in a bear costume.”

RELATED: this is not a trail race