With all the right treats and training, almost any dog can become a good trail running companion. Even some unlikely puppers might grow into majestic trail beasts. So please sit, no barking while we look at the four legged facts.

Consider adopting a rescue. A more mature canine companion is less likely to let you down, as you can already be sure of their predisposition for trail running. Mutts and mixes tend to be hardier and experience lower incidence of genetic disease. Not every pupper loves to trail run, and you can’t know based on breed alone. Each individual pupper will grow to have lovable quirks and strengths. 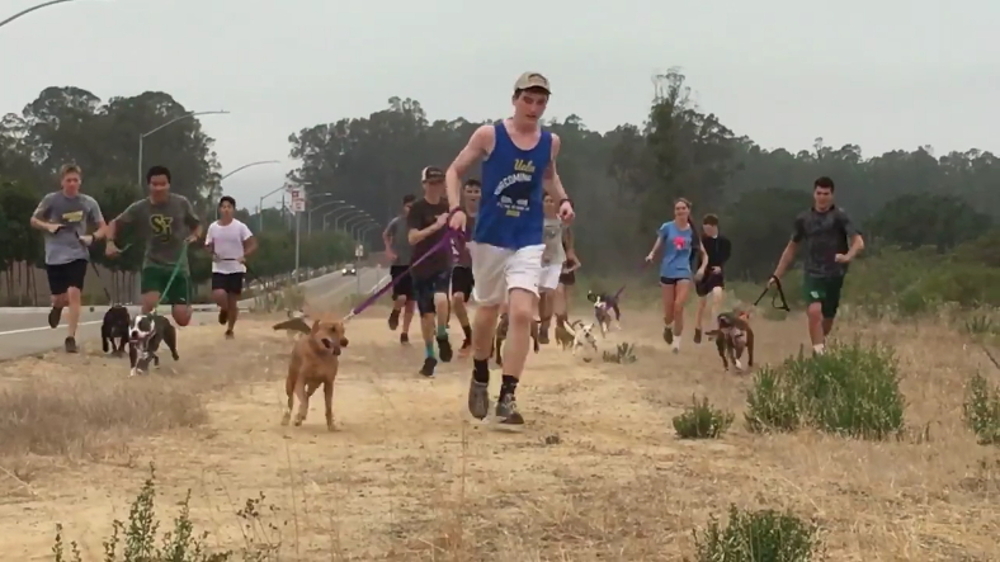 Learn from each other

As with all relationships, communication is key. Other dogs, wild animals, and treacherous terrain are just a few of many potential dangers. Responsible humans properly train and equip our puppo dogs for the trails. We all have a huge responsibility to each other, and to our environments. In fact there are innumerable considerations. If there were ever a fair comparison between raising a human child and owning a dog, this is it, because training a trail pup is the real deal.

“My boy Caius proved himself to be the perfect running companion in his prime,” boasts Bernaquez. “I often joked about him being my coach, but I did really learn a lot from him, with regards to pacing and just enjoying the run. He’s done countless adventure runs and mountain summits with me. To boot, he was the first official Vancouver Island Cani-Cross Champion. Quite the stud.”
Clearly.

Sometimes rambunctious pups turn out to be trail duds. Take this secondhand account of a big boofer:
“I had a border collie/karelian bear dog cross. Great endurance and very smart. Unfortunately her wild nose took her off to so many places without me, sometimes for hours or even days. Worst of all she used to chase animals out of the bush, back towards me!”

“Dachshunds are tripping hazards,” remarks another trail runner. “As are one-eyed pugs. Wouldn’t trade them for anything though! Just tend to leave them at home when I trail run!” Adorable.

“I wouldn’t recommend running my 3 legged pomeranian,” quips Shannon. “She’s a little slow and a bit grumpy. Fortunately, I have the joy of running/biking/hiking with a friend’s Vizsla, and he is awesome! Yes he likes to sniff everything, but he sticks around like velcro. He loves and protects his humans like there is no tomorrow. Love love love!”

Owners listen to their dogs

Compared to humans, dogs are a higher calibre of being. Enough fire has gone into each canine to sustain three to seven humans. They push themselves harder than we do, and they will dig deep and sacrifice until they have nothing left, due to their profound, innate sense of duty and honour. This is not a smart way for anyone to train, not even a good doggo. Although most dogs thrive under hard working and playing conditions, it is still possible for them to overtrain. Don’t be fooled by their brave eyes and eternal smiles.