For some ultrarunners, the idea of a bachelorette party is a bit too conventional. We prefer 5 a.m. adventures over a fancy night out, burgers over shopping, and black toenails over pedicures. When Canadian trail and mountain runner Tara Berry got engaged a few days before racing UTMB in 2017, her friends knew she needed an ultra celebration. Berry embodies what it means to be a trail and ultrarunner. She trains and races with grit, smiles, and humility–usually while wearing some strange costume. Throughout the winter months, Berry’s close friends planned an adventure fit for an ultrarunner. They began ramping up their mileage and training in order to complete the Zion 50-mile traverse on Easter Saturday.

RELATED: Interview: My boyfriend proposed to me at the 2017 Ultra-Trail Du Mont Blanc

The ultra-bridesmaids soon realized how balanced the bride-to-be was. When Berry gave them the list of bachelorette invites, they determined the demographic was half ultrarunners and half normal citizens. This made group dynamics both diverse and entertaining. It also required some creativity in the planning, since not everyone would appreciate frolicking in the dirt all day long. 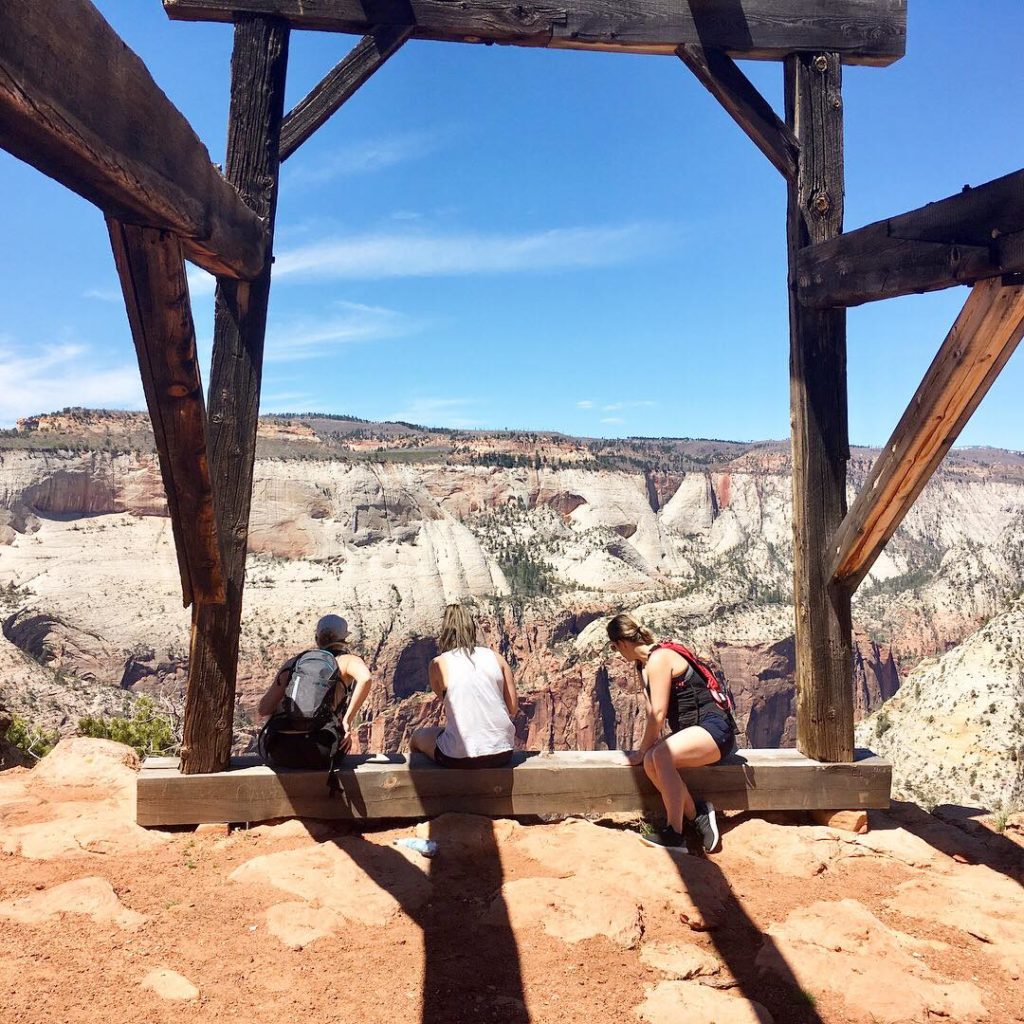 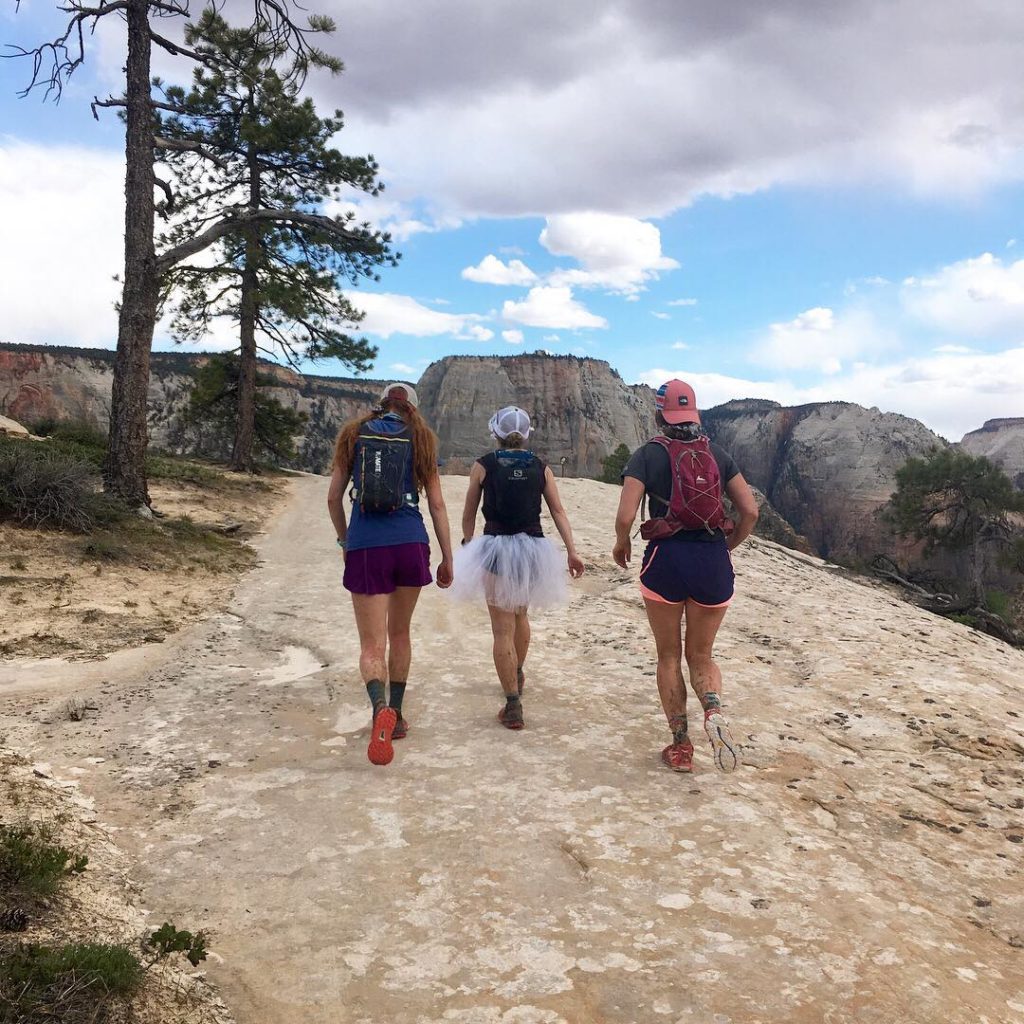 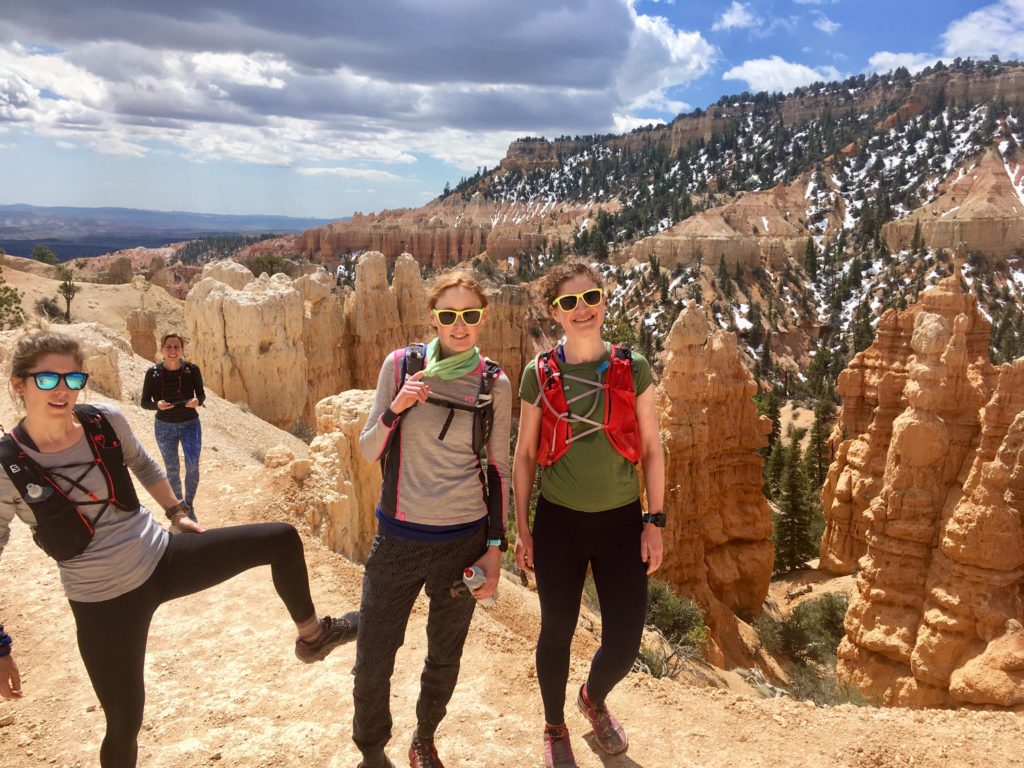 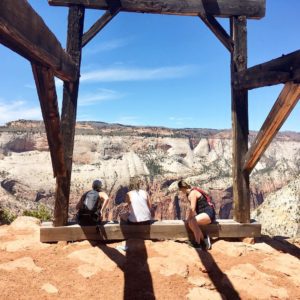 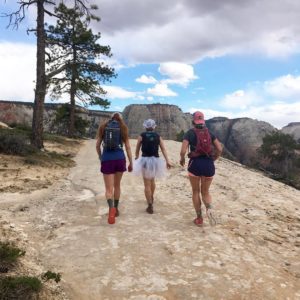 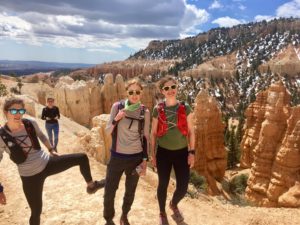 The traverse was originally a secret for Berry. However, when you tell an ultrarunner that a big adventure for them is planned in Zion National Park, they might have an idea of the route. Once the secret was revealed, the ultrarunners spent months training for the event and coordinating logistics. Unfortunately, due to a landslide, the planned traverse was impossible, and the bridesmaids determined an alternate route. Berry’s bridal party was focussed on ensuring she would have an ultra-adventure at any cost.

The women stayed in a quaint cabin in the middle of Zion National Park. With limited cell reception and zero wifi, the city folks and the dirtbag runners connected immediately. The location was chosen for its proximity to the traverse and other trailheads. However, Mother Nature had closed down one of the roads, so more bonding occurred while ultra-driving to trailheads throughout the weekend.

Thanks to Salomon Vancouver, everyone boarded the plane with a Salomon tote bag full of toques, stickers, bottle openers, lip gloss, scrunchies, Easter eggs, Bandaids, glitter, and a copy of Canadian Running Magazine’s trail running issue. Berry boarded the plane dressed as an ultra-bride, wearing wedding paraphernalia tossed over her technical running gear. The crew of 10 looked like a typical bachelorette party on the plane to Las Vegas. However, the only intentions in Vegas were to pick up rental cars and drive four hours to Zion National Park. 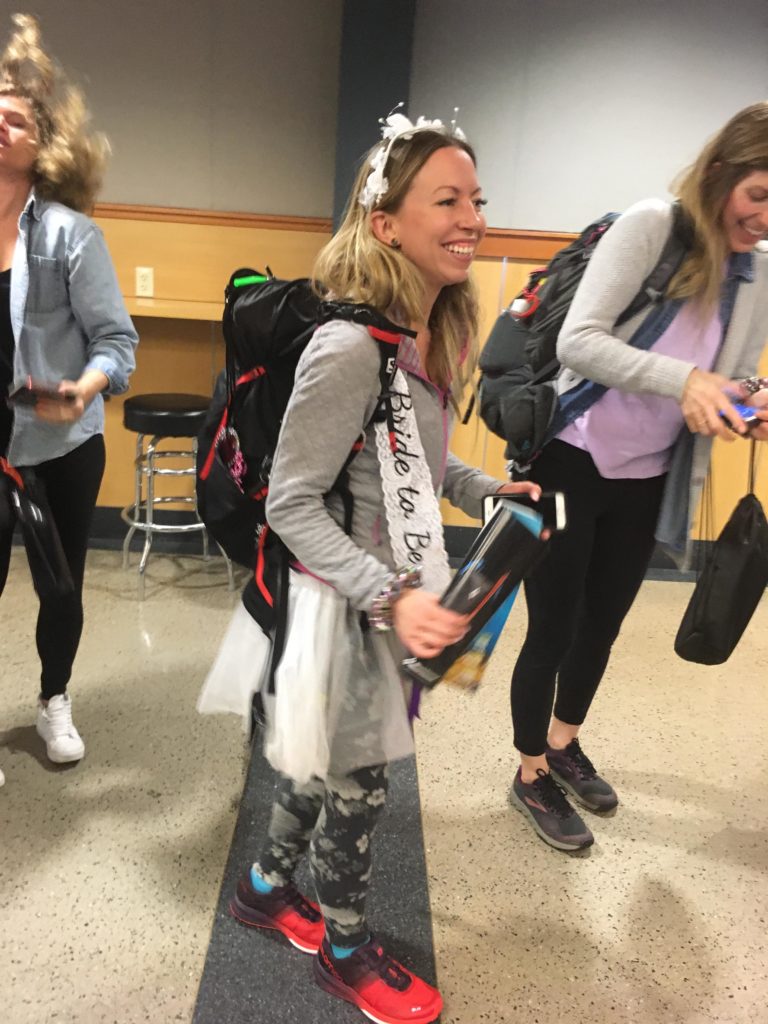 The travelling outfits of Tara Berry 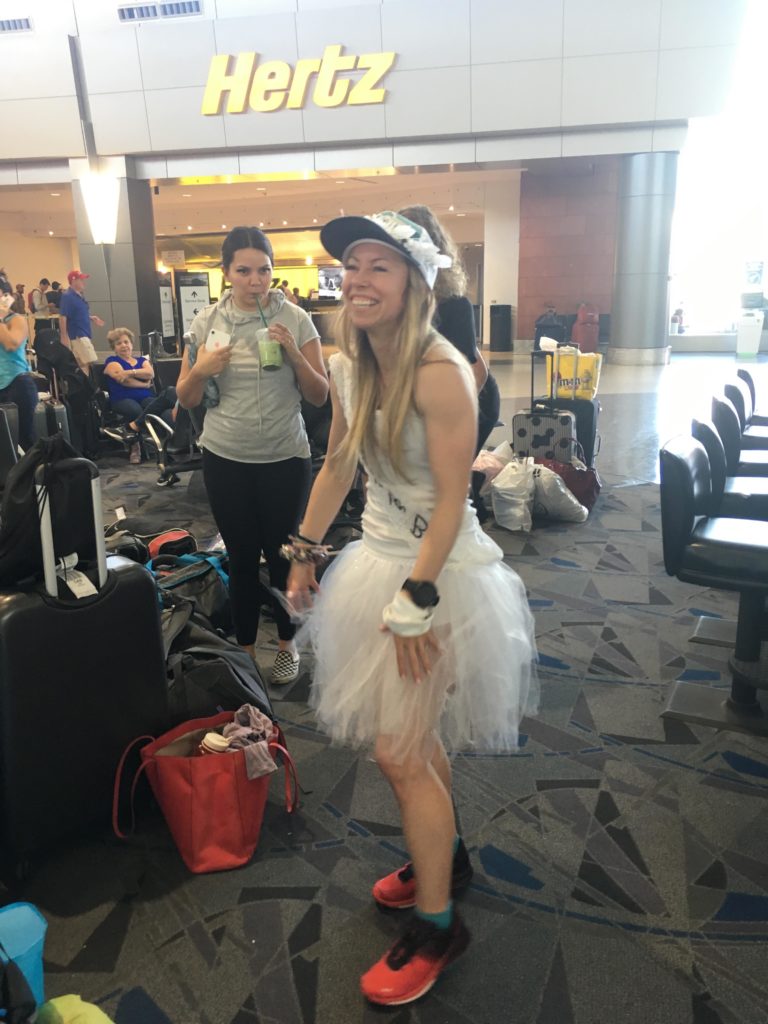 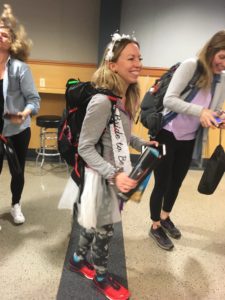 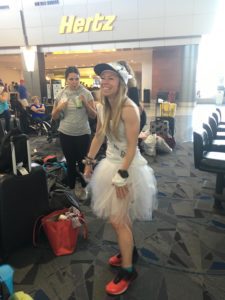 Thursday, Day 1: Travel day. Flew to Las Vegas and drove to St. George, Utah for dinner and groceries. Thankfully, the women almost bought out the entire grocery store, as there are not many calorie establishments toward Zion. Arrived at AirBnb in Zion late evening.
Friday, Day 2: Group hike/jog to Cable Mountain, a trailhead near the house. An excellent activity for everyone to get acquainted. 10K walk/hike for some and 20K jog/hike for others.
Saturday, Day 3: Six of the women left the house at 5 a.m. for the two hour drive around the park to the West Rim Trail entrance in Zion. The 50K adventure began with the famous Angels Landing hike, and continued as an out and back along the West Rim. The ultra-bridesmaids ran and laughed about Tara’s “Bridal Body Bootcamp” ensuring every hiker knew they were helping the bride “get fit” for her wedding. Two of the girls turned back early due to a tumble and cacti mishap.
The remaining women left at a normal hour from the cabin and drove to complete the incredible Angels Landing hike that day. Everyone reconvened at the Zion brewery after their respective adventures.

Sunday, Day 4: The group drove the Bryce National Canyon for a 13K adventure on the Fairyland Loop. The trail was ideal for a Bachelorette, as the crew quickly concluded the phallic resemblance of the hoodoo rocks. The evening included Tarot Card readings and gluttonous homemade nachos.
Monday, Day 5: Travel day. The women ran a 13K out and back trail to Observation Point right from the house before driving back to the Las Vegas Airport.

The women arrived back to their real lives with sore legs, tired eyes, chafed skin, black toes, tender abs from laughing so hard, and a new appreciation for Utah’s four percent beer. For the ultrarunners, the trip felt like a typical weekend doing what they love. Most importantly, everyone had the opportunity to explore new trails and celebrate a trail runner who constantly brings so much joy and positivity to others.