When Peter Messervy-Gross landed in Ulaanbaatar, Mongolia two days before the Rat Race Bucket List Mongol 100 earlier this month, he discovered the airline had lost his luggage, which contained various items of cold-weather equipment including base layers, a sleeping bag, and food. The 47-year-old father of three had travelled from his home in Jersey in Britain’s Channel Islands via London and Moscow, and though he hoped his kit might turn up in time, it didn’t. But, having paid the £2,500 entry fee (about CDN $4,400), he decided to do the race anyway, in his jeans and brogues.

Hands up who's turned up on race day minus a piece of kit?https://t.co/hh0klfEIlX

RELATED: Coldest races in the world

As BBC News and the Daily Mail reported, the race crosses Lake Khövsgöl Nuur, which at 2760 square kilometres is the largest freshwater lake in Mongolia, and which freezes solid every year. It takes place over four stages, and temperatures reach as low as -25 C. Competitors may run, walk, skate or bike, but, limited by his equipment, Messervy-Gross was forced to walk most of the distance he had spent months training to run. He was out there for more than seven hours on each of the first three days, and five hours on the final day.

His fellow racers pitching in generously to lend him whatever they could spare, including socks and a balaclava, but no one had extra pants or shoes that would fit him (he’s a size 13 shoe), and the local stores didn’t stock anything bigger than 11. Thankfully, his friend Marcus Liddiard lent him spikes for running and walking on ice, as well as long underwear. 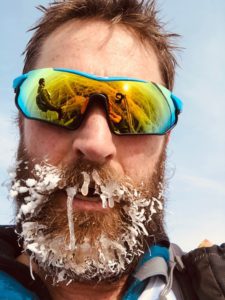 Despite suffering swollen feet and terrible blisters, overall Messervy-Gross seems to have had the time of his life. In a blog post he wrote about the experience, he says “I expected it to all be about a ‘race,’ when in fact it became all about the people and comradery of doing something amazing.”

“Come to Mongolia they said… and it was extraordinary.”

Messervy-Gross, chief information officer for Sanne, a company that provides corporate administrative and financial services, is originally from New Zealand.


Oh-and his luggage mysteriously showed up as he was preparing to fly home. No explanation was offered by Aeroflot, but it did compensate him USD$100 for the inconvenience.