Canadian ultrarunner Marianne Hogan was the first female finisher at the HOKA Bandera 100K on Saturday, which comes with a Golden Ticket to the Western States Endurance Run in June. Hogan’s time of 9:17:06 puts her at third on the all-time list behind fellow Canadian Ailsa MacDonald of Alberta, who won the race in 9:16:38 in 2020. Calgary’s Arden Young finished seventh in a course PB of 10:28:14, an almost 15-minute improvement from her 2020 result. 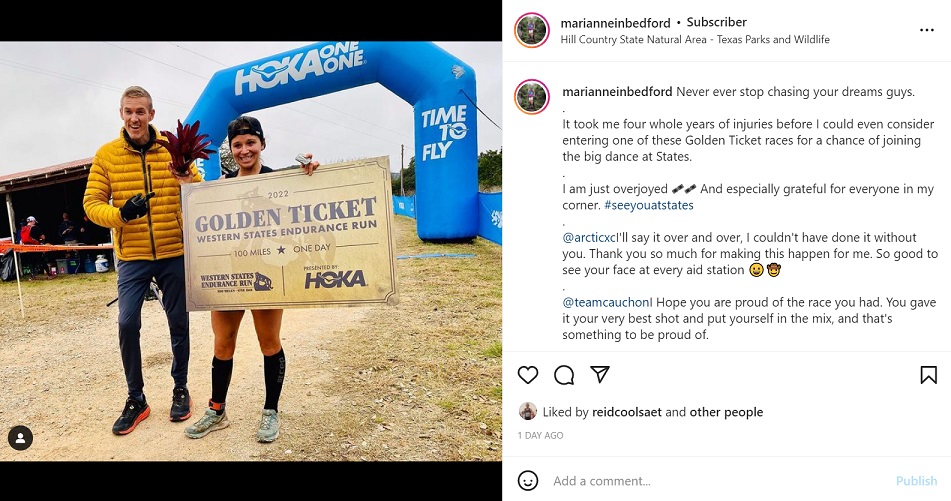 Hogan’s name may be new to many in the trail running community because four years of injuries prevented her from entering any Golden Ticket races. “I spiral fractured my tibia and broke my fibula three years ago in a bad trail spill, and required two surgeries in order to repair it and it has been quite the road back to recovery,” she says. “I had 14 screws and two plates in my leg that caused me a lot of pain while running, and my lack of strength and mobility kept causing me to turn my ankles, which ultimately led to some torn ligaments.”

Hogan still deals with the after-effects of those injuries but has worked hard at building strength to avoid twisting her ankles (which she used to do at least five times per outing). “I cannot stress enough the importance of remaining positive and finding creative ways to enjoy life and the outdoors if an ultrarunner happens to injure oneself,” she says. “I’ve stayed very involved in the ultrarunning community during my injured time by coaching, crewing and pacing as much as I possibly could.”

A former triathlete, she was part of Triathlon Canada’s Junior National Team between the ages of 16 and 19 where she participated in multiple World Championships. Her best finish was 11th in Hamburg, Germany. In 2019, Hogan joined Triathlon Canada’s para program as a guide for para-athlete Jessica Tuomela, and the pair won a bronze medal in 2019 at the World Para Triathlon Series race in Montreal. They went on to win gold at the Para Triathlon World Cup test event in Tokyo and bronze at the Para Triathlon World Championships in Lausanne.

Today, Hogan is a part of the Salomon running team and has started making waves in the trail running world. In November 2021, she took home second place at the Ultra-Trail Capetown 100K, crossing the line in 12:15:13 behind two-time UTMB winner Courtney Dauwalter. Her finish on the weekend is an excellent start to the new year, and Canadian trail running fans will be eagerly waiting to see what Hogan does next. “Last year was all about getting myself healthy, and now it’s all about getting myself in the best shape of my life for June 25,” says Hogan. “I am super pumped.” 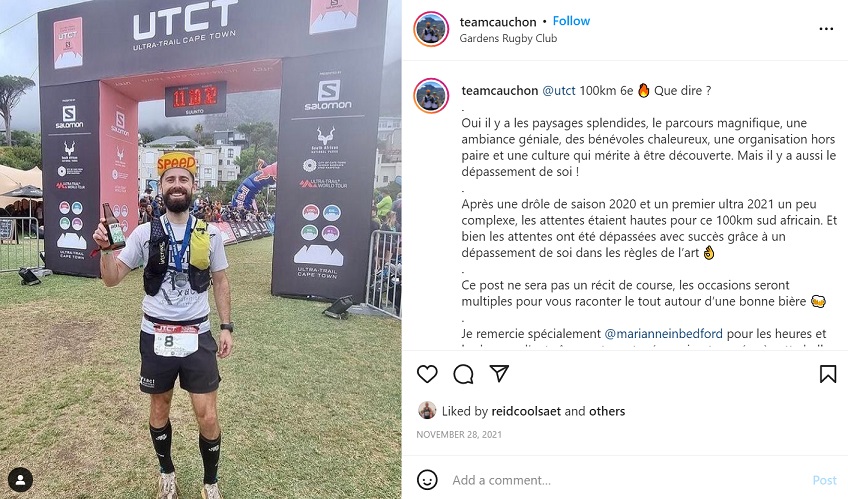 Canada’s top male athlete on Saturday another Quebec runner,Jean-François Cauchon, who finished just ahead of Hogan in 12th place (Hogan was 13th overall) in a time of 9:11:54. Cauchon has been a strong performer in the ultra trail circuit for several years and is the number-one ranked ultrarunner in Canada, according to the International Trail Running Association. He’s won two Ultra-Trail Harricanas and two TransMartinique races, among others, and most recently finished sixth at the Ultra-Trail Capetown 100K.