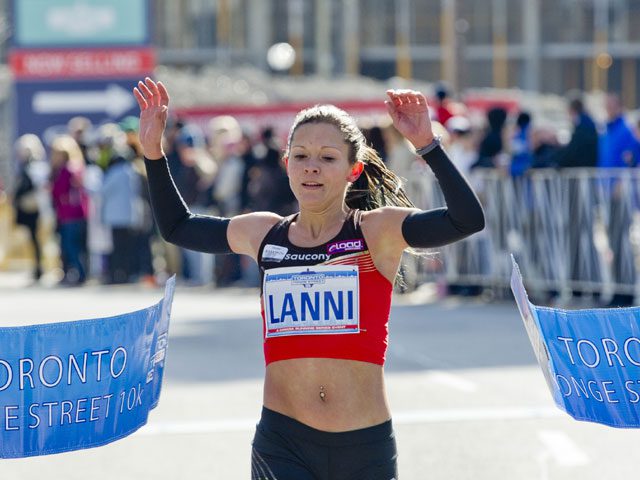 In 2012, Lanni Marchant became Canada’s top female marathoner when she finished fifth at the Rotterdam Marathon in 2:31:51. Along with Krista DuChene, Marchant has helped launch a new era in Canadian women’s marathoning. She is currently the 9th fastest Canadian woman of all time.

Marchant, a native of London, Ont., represented Canada at the 2013 IAAF World Championships in Moscow in August. But the oppressive heat and humidity forced Marchant nearly grind to a halt in the second half, and she walked most of the last seven kilometres.

On Sunday in Toronto, Marchant will team up once again with DuChene, as both hope to dip under 2:30 and perhaps even break the Canadian women’s marathon record.

Lanni Marchant: Studying for and writing the bar exam.

CR: Do you have any weird pre-race superstitions?
LR: I used to be very superstitious. Same shorts, sports bra, socks, etc. for every race. Now I try to be pretty easy going; except I have to wear my hair in a ponytail. I train with it in a bun or braided, but only a ponytail to race. I have no explanation as to why.
CR: What’s your favourite thing to eat during the carb load?
LR:  There is nothing I enjoy eating during a carb load! It’s miserable!
CR: What’s your worst or funniest memory from running a race?

CR: At my first marathon I got attacked by a garbage bag. O.K., so I got tripped up by it at one of the aid tables, but when I got home to Georgia, my housemates came down into my room wearing garbage bags over their heads and attacked me.

CR: Running my first half-marathon at Springbank Park in London, Ont. It was tough, but my entire family came out to watch and cheer.

CR: Lawyer would be the easy answer [Marchant is a practicing lawyer], but I have always wanted to teach.