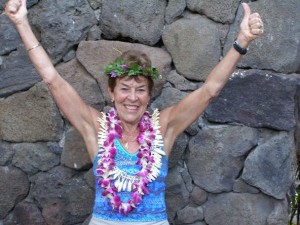 An 87 year-old Canadian woman broke a 20 year-old age record yesterday at the Honolulu marathon. Betty Jean McHugh of North Vancouver finished the marathon with a time of 5:36:49, besting the previous record of 7:06:48 run by Mavis Lindgren of Oregon in 1994.

BJ McHugh currently holds the record for women 85-89 from her race in 2012. The next few years could see her chase the marathon records for ages 88, 89 and 90, which are still held by Lindgren.

For the McHughs, running is a family affair. Her son Brent also ran the Honolulu marathon, finishing with a time of 3:36:30, as well as her granddaughter Ava, with a time of 4:38:02. While running a marathon with a parent is incredible, running with a grandparent is an inspiring rarity.