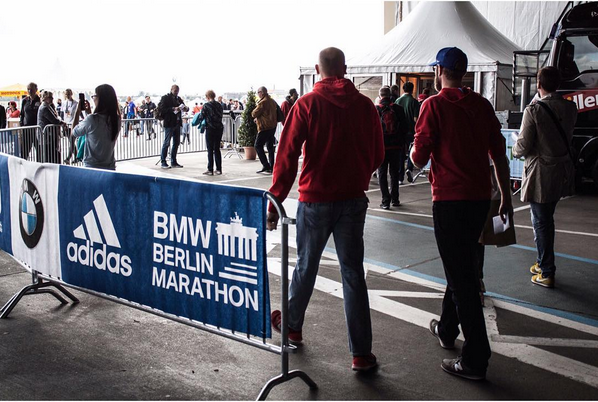 Today’s Berlin Marathon was quite the exciting one for runners and spectators on the course and for Canadians paying attention from this side of the Atlantic.

Berlin is a fast course that attracts the world’s best marathon runners. With several of the top performers setting PBs and with the current world record set at the race, Berlin is one of the biggest days of the year for running fans.

In Canadian running news, Reid Coolsaet ran the second fastest Canadian marathon getting close to the record of 2:10:09. He ran a 2:10:29 today in Berlin.

With a deep field of notoriously fast elites, a record could have been a possibility. Today’s marathon champions were Eliud Kipchoge and Gladys Cherano. While no world records were broken this year, Kipchoge still ran a fast one in 2:04:01. Cherano ran a sub- 2:20 marathon in 2:19:25.

Canadian run crew, Pace & Mind were also on the scene today taking photos for Canadian Running. Check out their shots and tidbits from social media to get a feel of Berlin this year.

Berlin Race Weekend 2015 The Berlin Marathon is celebrating an unofficial anniversary: it has been 25 years since the first time the Marathon passed through both sides of the previously divided city via these Brandenburg Gates. Gram by: @paceandmind #bmcommunity #together42 #worldmajor #marathon #distancerunner #run #pmberlin #runforyourlife #berlinmarathon #runberlin

Race Weekend Berlin. It’s race weekend in Berlin and we’ll be live ‘grammin’ powered by team @paceandmind. Over 40k runners will hear the roar of over 1 million spectators as they blast through this IAAF World Major on Sunday. #together42 #bmcommunity #runforyourlife #worldmajor #distancerunner #canadianrunning #runberlin #pmberlin #run #instadaily #marathoner A photo posted by canadianrunning (@canadianrunning) on Sep 25, 2015 at 8:06am PDT

Can’t believe I made it. Thanks to the best supporters in the world❤️!! The pain was all worth it #berlinmarathon pic.twitter.com/JLrTHueKJT

My heart was in it, my legs rebelled. 3:08 in Berlin, still good for my 2nd fastest marathon. Prost!? #BerlinMarathon pic.twitter.com/otk9UusR2b

SO close! Wow! Big CONGRATS @ReidCoolsaet on 2:10:29 PB 6th #berlinmarathon back where it all began #Berlin2009 pic.twitter.com/eSoHaGnVpp